A particular delight of opera is that the art form can be enjoyed on so many levels: gripping music drama, glitzy pageant, guilty-pleasure camp. And so it’s a particular disappointment that Darko Tresnjak’s production of Samson et Dalila, which opened the Metropolitan Opera’s season last night, offers neither enlightenment nor fun; somehow managing to be tacky and dull at the same time.

Camille Saint-Saëns’s 1877 work, centering on the seduction of the pious Biblical hero Samson by the pagan Dalila, offers rich melody but not much in the way of story, which leaves it in the director’s hands to mold it into a drama.

Damiano Michilietto did just that in a production at the Paris Opera in 2016, reshaping the piece into a study of political radicalization. In this version, Dalila became fascinated by Samson’s fervor and eventually partnered with him in the destruction of the Temple of Dagon—not an act of God but rather a terrorist bombing.

That staging was intended to travel to the Met but the company opted instead for Tresnjak’s limp take, which comes across as predictable and listless as a regional “instant opera” of the 1970s.

There’s a dated vibe to the costumes by Linda Cho as well, with the naughty Philistines cavorting in Bob Mackie-style neon colors and bugle beads, while the pious Hebrews opt for neutral-hued knitwear that might have been purchased at an Eileen Fisher outlet store.

Even in a putty-colored poncho and jersey hammer pants, tenor Roberto Alagna rose to the challenge of Samson, acting with subtle detail and singing with bright tone and crisp rhythm.

Sadly, his voice abandoned him in the last act, ironically just at the point when Samson pleads with God to restore his strength. His final high B-flat was not much more than white noise, as anticlimactic as the non-collapse of the pagan temple.

In contrast, mezzo Elīna Garanča’s performance was all about voice, and with an instrument as luscious and flawless as hers, that should be enough. Next to the vigorous Alagna, though, she seemed timid and vacant. Even a russet wig and a closetful of gaudy drag (including a magenta and lime caftan that made her look like Charles Busch playing Endora) failed to transform the essentially chilly Ms. Garanča into any sort of temptress.

Among the unevenly cast supporting males, Laurent Naouri deployed his worn baritone with arresting authority as the High Priest. Even better, he maintained a straight face during Austin McCormick’s “Bacchanale” choreography, which reimagined the acolytes of the pagan god Dagon as methed-up go-go boys.

When Samson is revived in the spring, the stars of Michilietto’s production, Aleksandrs Antonenko and Anita Rachvelishvili, take over the leading roles. Let’s hope they can import a little dramatic electricity as well. 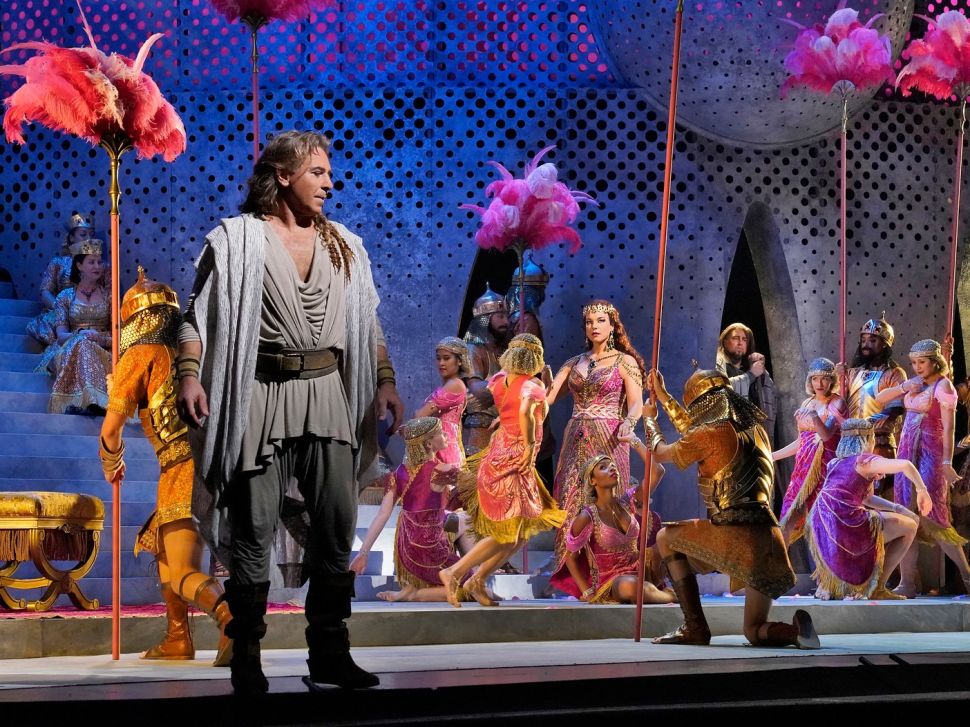