The etymological root of nostalgia—the keynote of Rob Roth’s multimedia installation Soundstage—is drawn from the Greek words for “homecoming” and “sickness.” It’s the pain of longing to return. But the nostalgia afflicting Roth’s protagonist, whom he plays with languid, arch intensity, is faintly ironic: this sloe-eyed recluse never leaves home. Instead, he snorts cocaine at the kitchen table, sips his Chablis and endlessly replays VHS tapes of his favorite film star, Rebecca Hall, appearing only on screen. Swaddled in semi-drag, he paints his nails and waves his fingers before the static of the TV (remember static?) hoping one day to pass through the cathode-ray looking-glass and merge with her.

That pretty much covers the “what” of Soundstage, a lusciously designed, 60-minute queer exorcism that meditates on memory, imitation and decay. In its classic-camp tropes of identity breakdown, Hollywood burn-out and damaged divas, it variously evokes the work of Jean Genet, Kenneth Anger and Tennessee Williams. In reductive criticalese, it’s a mashup of The Madness of Lady Bright and Krapp’s Last Tape as remixed by the Wooster Group.

It’s the “how” of the piece that sustains one’s attention—at least for a while. Media designer Chelsie McPhilimy and set designer Frank Oliva have built a dolly track that snakes through the Here Arts Center’s main stage. On it, black-clad Butoh dancers push, with exquisite slowness, a camera. It lingers lovingly on the face of this drug-addled cineaste, clutter atop the TV, and a mannequin wig head that—in one splendidly eerie effect—comes to life with Hall’s video-projected face.

The voiceover is the least interesting element—unfortunate, since there’s rather a lot of it, diluting a pure visual experience. A handful of trance-y electronica songs composed by Kamala Sankaram provide aural relief and variety. But because Roth’s inward-focused performance and the hermetic, cryptic dramaturgy reject a truly theatrical engagement with the audience, you find yourself inevitably wondering, “Why am I here?” Or rather, “Why am I not holding a Dixie of box Shiraz and watching this for a few minutes in a gallery on West 26th Street?”

Answer: You might miss seeing the depth of Rebecca Hall’s appearances. Roth’s secret weapon is the statuesque, chiseled beauty who pulls off the doomed celluloid-siren act with alluring grace. Hall smolders ripely in the satanic-possession flick, then later appears harrowed and gray as a pill-popping 19th-century hausfrau. In a clip from a fictitious TV chat show, Hall plays the unnamed star in her late, Judy Garland phase: bitter, boozy, sick of her own legend and fawning fans. When asked what it was like to be a muse to so many (male) directors, she dryly responds: “Muse and use are very similar words, darling.” It’s a lame quip, but Hall gives it the patina of wit.

One senses that through this brooding, self-medicating ritual, Roth and his collaborators are enacting what Eve Kosofsky Sedgwick called a “reparative reading” of camp artifacts. That is, the reading of and wallowing in cherished cultural texts (real or fictitious) not just for sentimental, morose purposes, but to reach empowering, healing interpretations as an integrated, social being. Alas, nobody is getting repaired in Soundstage. The lady on screen sings a swan song and disintegrates into stardust memories, and the goth shut-in returns to his zombified absorption in TV static. We’ve witnessed a pixelated tragedy sans pity or purgation. Such claustrophilic fatalism may be essential to the pomo Queer Romantic vibe, but it also contributes to real-time boredom.

Roth’s construct, while technically impressive with its crisp, expertly framed cinematography and intricately choreographed audio-visuals, does not really push the human conversation forward. Instead, it’s a heavily mediated backward glance that might be meaningful to the creator, but feels dated and vaguely unnecessary. When technology is the freshest thing onstage, there may be a problem. Just ask Sunset Boulevard protagonist Norma Desmond; she claimed that the pictures got small, but the truth is, she got old. 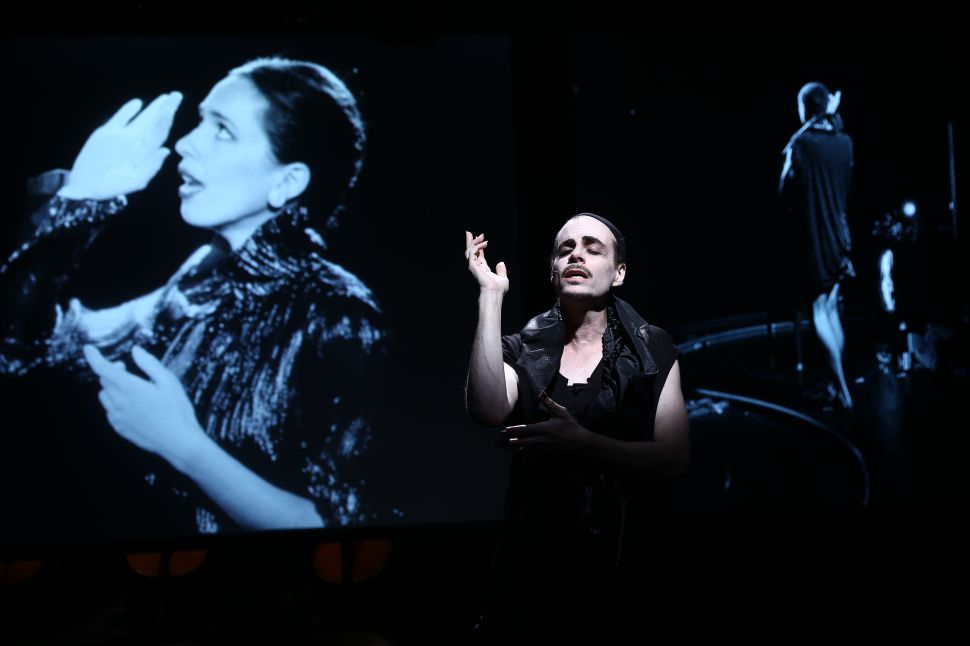