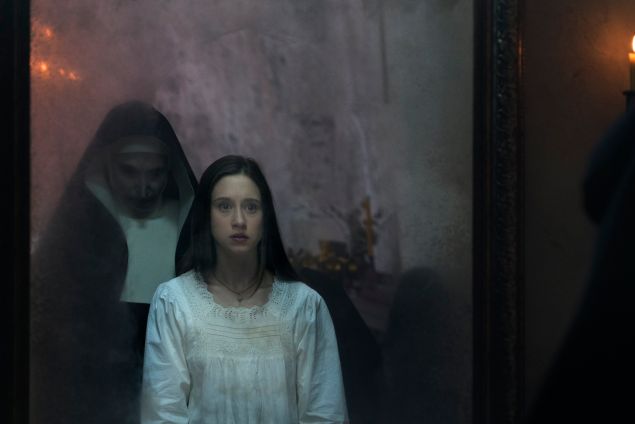 Rich in atmosphere but bereft of new ideas about how to scare an audience, The Nun is like being stuck inside a club with cool decor where the DJ keeps playing the same song over and over again.

The camera swings left, away from a character, then swings back and there’s something creepy behind them. And again. Something darts across a window in the distance. And again. It’s very quiet in the foggy, light-dappled forest, and then—gotcha!—suddenly very loud. And again.

Then there are the hands. Reaching out of the darkness and sometimes through doors or up from the cold earth itself, The Nun tries to squeeze a lot of terror out of the pale boney hands that grab, paw at and grope its protagonists. After a while, it feels less like watching a horror movie than attending a summer music festival filled with drunken frat boys.

Do any of these various jump scares ever register? Not really. For that to happen, the movie would have to have built up tension and suspense, which I guess it figures it isn’t required to do. Why bother with all that work?

After all, The Nun already carries the imprimatur of “The Conjuring Universe,” which is fan-approved marketing speak that denotes its linkage to the clockwork of films that preceded it—2013’s The Conjuring, 2014’s Annabelle, 2016’s The Conjuring 2, and 2017’s Annabelle: Creation—all of which were better than this. Being part of this popular run of genre films may have begun as a kind of USDA stamp of horror quality but—if The Nun is any indication—it now means that the filmmakers don’t have to rack their brains to think of anything new to scare or surprise us.

Much as Annabelle did with the first Conjuring, this film provides background for the antagonist of The Conjuring 2. The story takes place in 1952 in Romania, where The Nun was also shot. The Vatican has tasked a grizzled priest (Mexican actor Demián Bichir) and a novitiate (Taissa Farmiga, doing Clarice Starling in white vestments) to investigate the apparent suicide of a nun at a bombed-out mountain abbey that fell on hard times after the war. After being escorted to the creepy place by a randy local named Frenchie (Elle‘s Jonas Bloquet), they discover that not only is the abbey parked on top of a portal to hell, it’s inhabited by a demon (Bonnie Aarons, reprising her role from The Conjuring 2 and Annabelle: Creation) who prefers to wear a habit so it can easily blend in.

There is a satisfying sturdiness to the look of the film, with clever use of light, and shadows rich with details that call for you to stare into them deeply. It’s like you’ve paid a little extra for the deluxe version of the horror house ride, replete with a double heaping of fog ladled on thickly to the proceedings like Cool Whip in Jell-O Salad.

Unfortunately, the set is dressed with no place to go. The plot is as uninvolving as it is slow moving. The talented cast is game. Farmiga, sister to the series’ star, Vera, has the kind of wide eyes that seem in a constant state of devotional wonder. But all are saddled with clunky dialogue that seems infinitely less considered than the atmospherics. Beyond the title character, the movie’s connection to the overall series is tacked on and perfunctory.

There’s so much promise here that goes untapped for the least satisfying reason imaginable: the people who made the movie didn’t need to, because the film would still make money. Sadly, that may be the scariest thing that The Nun has going for it. 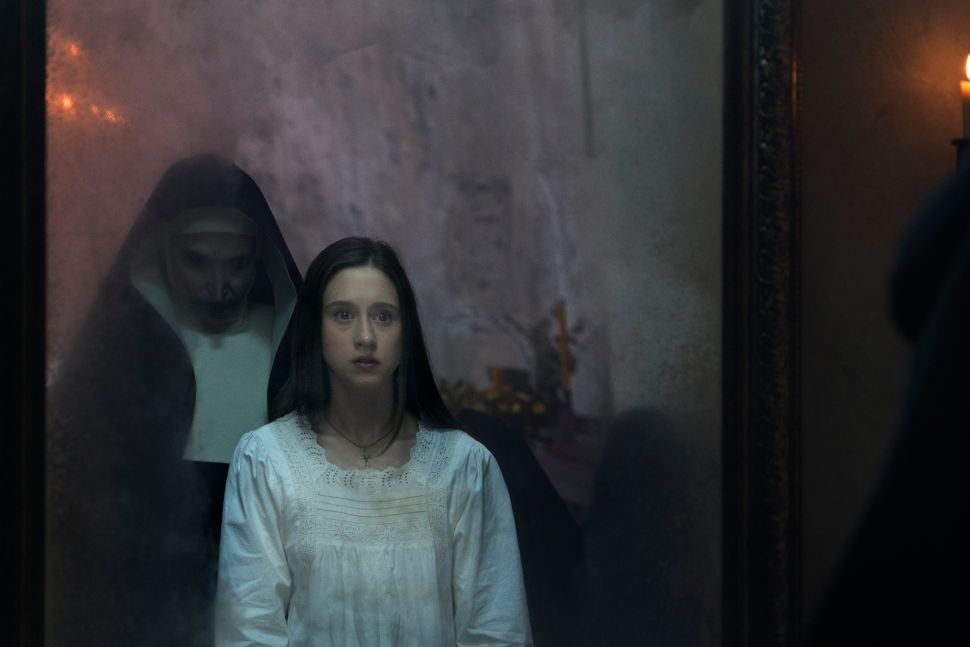