On 60 Minutes Sunday night, President Trump finally admitted that Vladimir Putin “probably” murders his opponents abroad, but he insisted the Kremlin wouldn’t do such a thing in the United States. Many in U.S. intelligence would disagree.

The mystery on everyone’s mind right now is the October 2 disappearance of the Saudi journalist-turned-dissident Jamal Khashoggi, who went missing at the Saudi consulate in Istanbul. As I explained in my last column, there’s good reason to believe that Khashoggi, a legal resident of the United States, was murdered by Saudi intelligence, a conclusion that looks firmer with each day he fails to appear.

Khashoggi’s disappearance is a problem for the White House, given the close relationship between the Trump administration and Crown Prince Mohammad bin Salman, the Kingdom’s de facto leader, whose dislike for the dissident was no secret. Worse, the National Security Agency gave the White House advance warning that the Saudis planned to harm Khashoggi, but Team Trump apparently did nothing (or at least nothing effective) to protect the doomed journalist.

With trademark bluster, President Trump promised “severe punishment” if Riyadh killed Khashoggi, but this morning he undercut that with a tweet, stating “Just spoke to the King of Saudi Arabia who denies any knowledge of whatever may have happened” to the missing man, adding that he’s dispatching Mike Pompeo, our top diplomat, to discuss the case with the Saudi king.

President Trump needs this embarrassing case to go away, but that’s unlikely. Our European allies are turning up the heat, demanding answers. Worse for the White House, Congressional rumblings indicate that the Hill, too, wants to know what happened to Khashoggi. As Florida Republican Senator Marco Rubio explained, “If they lured this man into that consulate, they went medieval on him, and he was killed, and he was chopped up and they sent a death crew down there to kill him and do all this, that would be an outrage.”

For decades, the United States has tolerated myriad Saudi misconduct, much of it regarding terrorism and extremism—even involving the 9/11 attacks—in the name of geostrategy and oil. That devil’s bargain perhaps has outlived its usefulness, and Khashoggi’s disappearance may finally shine light on Riyadh’s dark secrets, a development that ought to alarm the White House.

It’s therefore puzzling that President Trump just publicly reopened the issue of state-sanctioned assassinations. In last night’s barn-burner interview with 60 Minutes, the president commented on numerous hot-button topics, yet what pricked up the ears of counterspies inside the Beltway was Trump’s response when asked by Lesley Stahl about President Putin’s employment of assassinations abroad.

Q: Do you agree that Vladimir Putin is involved in assassinations? In poisonings?

A: But I rely on them, it’s not in our country.

Here’s progress of a sort, with our president veering towards admitting what our allies have been stating on-record, that Putin’s Kremlin is murdering opponents abroad. The near-fatal poisoning of Sergei and Yulia Skripal last March in Salisbury, England, with a weapons-grade nerve agent, has changed the game, since there’s unanimous agreement among Western security services that this outrageous act was the work of Russian military intelligence.

But what about in America? President Trump stated flatly that Russia wouldn’t do such a thing in our country. Regrettably for the White House, there’s good evidence that the president is wrong.

While a lot of Kremlin killings abroad—what Russian spies call “wetwork”—have taken place in the United Kingdom, beginning with the London murder of Aleksandr Litvinenko in 2006, Russians on the run from Putin are dying mysteriously in quite a few countries these days. Including in America.

Nearly three years ago, Mikhail Lesin died violently and mysteriously in our nation’s capital, just one mile from the White House. A onetime member of Putin’s inner circle, Lesin was a wealthy man who knew how Moscow worked. He founded Russia Today (later rebranded as RT) in 2005 to beam Kremlin propaganda worldwide and was in Putin’s good graces for many years. Like many other prominent Russians, however, Lesin eventually wound up on Putin’s bad side, so he fled for the safety of America. Or so he thought.

Unfortunately for Lesin, Moscow regarded him as a defector, a trusted insider who went rogue and absconded to America with countless Kremlin secrets. That Lesin was cooperating with our Justice Department was a poorly guarded secret, and presumably Russian intelligence found out. “Traitors always end badly,” the Russian president has stated, and RT’s founder proved no exception.

Lesin’s battered body was discovered in his room at the Dupont Circle Hotel on the morning of November 5, 2015. The medical examiner’s verdict, slow to appear, was death by blunt-force trauma to the head, neck, torso and extremities. How the fatal beating happened was far from clear. The victim had been out drinking heavily on the evening of November 4, but he managed to make it back to his hotel alive before expiring from his severe injuries.

Our government was apparently lacking the ardor to unravel this mystery. The FBI, which was supposed to have been protecting Lesin, didn’t, so if the Bureau had a desire to bury this case with the victim, the reasons aren’t difficult to grasp. Neither was President Obama eager to incur Putin’s wrath. This was of a piece with Obama’s general unwillingness to call out the Kremlin on its mounting misconduct. Add Lesin to the list of topics on which President Obama in his second term punted rather than confront the Kremlin, alongside ignoring his own Syrian “redline” in 2013, his 2015 shutting of a State Department effort to counter Russian disinformation, plus an unwillingness to call out the Kremlin for its interference in our 2016 election, which the Obama White House knew a great deal about as it unfolded.

What really happened to Lesin remains a mystery. The official verdict of accidental death is considered risible by U.S. intelligence officials who know the Russians. Intelligence reports since late 2015 have indicated that Lesin’s death was a contract killing ordered by the Kremlin, while skepticism among the spooks has seeped into the media. As an FBI official told BuzzFeed last year, “There isn’t a single person inside the Bureau who believes this guy got drunk, fell down, and died. Everyone thinks he was whacked.”

That assessment is widely shared in U.S. and Allied counterintelligence circles. Nobody is safe anywhere if Putin really wants you dead. The Kremlin watches defectors, including in America, and former Russian intelligence officers currently living in the United States under CIA protection are nervous. In one case four years ago, the threat was deemed so serious that the CIA relocated a Russian defector and his family who were living in Florida, before the Kremlin could track them down and harm them.

Anything’s possible now. Vladimir Putin doesn’t follow genteel Cold War rules regarding espionage. Somebody should tell President Trump he missed the memo. Which is remarkable since the Lesin case hardly places our president’s predecessor in a flattering light. Given that Donald Trump never misses an opportunity to malign Barack Obama, his public denial regarding Kremlin wetwork in America raises awkward questions, none of them flattering to this White House. 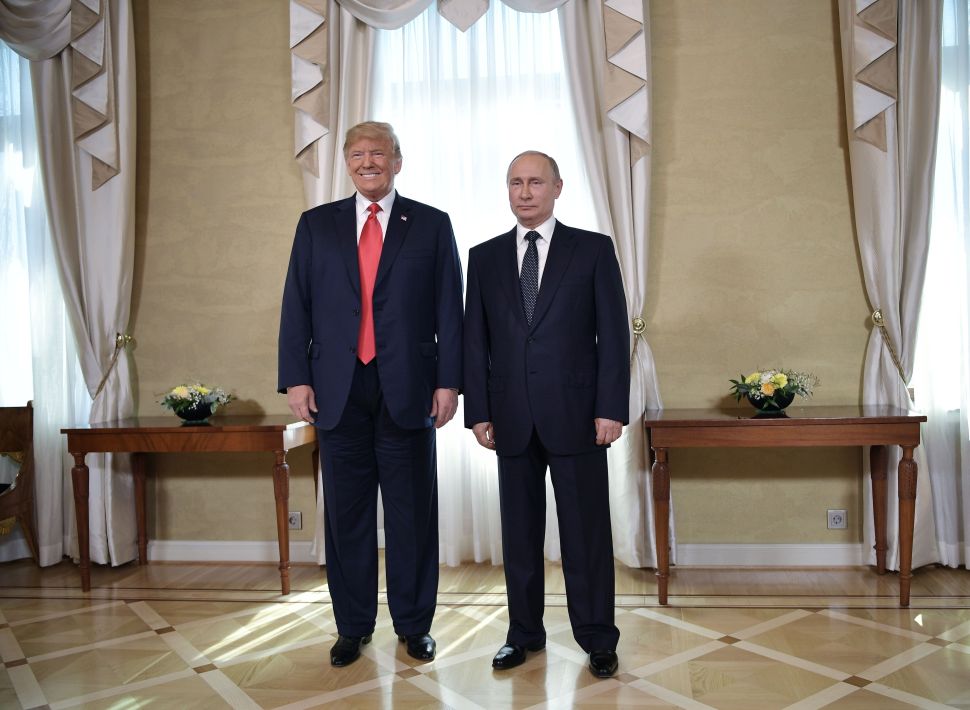