A Star Is Born hits theaters this week, and after a month of what seems like exhaustive press, its director and lead actor, Bradley Cooper, has often come off as reticent, a little too intellectual and a bit self-involved when discussing the movie over which he essentially had total creative control. As we hurtle toward Oscar season, he’d clearly like to keep the swirl of buzz around his movie as untarnished by criticism as possible. Hence why he chose to spend an evening on The Tonight Show with the king of softball questions, Jimmy Fallon.

Not only is Fallon deliberately, hopelessly apolitical, he’s also a “huge fan” of just about everyone who sits on his couch. But in this case his winsomeness makes Cooper look charming, and Cooper’s charm in turn makes Fallon look halfway competent.

During their interview Wednesday night, the two casually shot the shit, doubling over with laughter and even scampering backstage to check whether Cooper had worn the same suit the last time he appeared on the show (he had). Their tomfoolery is funny and cute, exactly as intended.

Highlights include them discussing whether or not his fans refer to themselves as “mini Coopers” (a topic that stemmed from a tweet from Mark Ronson, who cowrote A Star Is Born‘s lead single, “Shallow”) and Fallon ribbing Cooper for sharing a rather unremarkable story about his recent encounter with a drunk high school classmate who was awed by his fame (“How’d that happen, Brad?!” asked the drunk old classmate incredulously).

It’s not clear what makes it impossible for these two to be in the same room together without collapsing into fits of giggles, but it’s striking to see how differently Cooper behaves with Fallon.

Writer Taffy Brodesser-Akner had a tough time getting much out of the star this month when she interviewed him for The New York Times: “Listen, he said to me. I seem nice. He gets that I’m just doing my job. But he’s not going to get personal with me.” Compare that exchange to Fallon’s 2014 segment with Cooper, in which total mirth ensues. You have to wonder how many different versions of Cooper there are, and which is the real one. 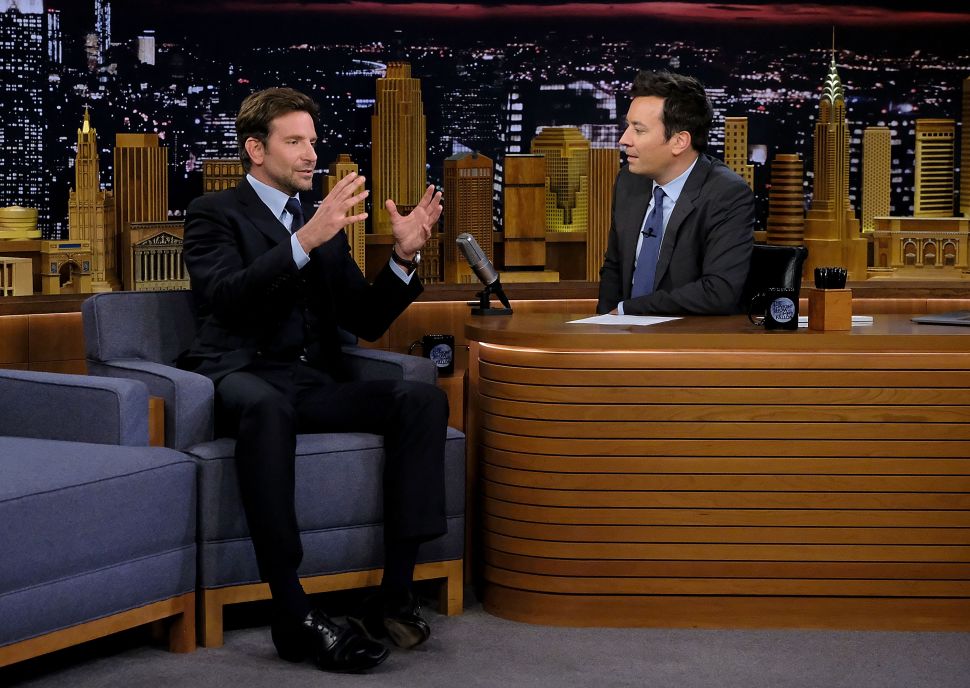