The Portrait of Edmond Belamy, a painting of a blurry, portly gentleman that was generated via algorithm by an artificially intelligent system, has just sold at Christie’s Auction House for $432,500, far surpassing its high estimate of $10,000. The creation of the painting was supervised by the Paris-based art collective Obvious, who are humans, but the painting itself was produced entirely by a “generative adversarial network,” an AI program that uses machine learning to survey and subsequently generate original imagery.

According to BBC, “The AI system compares its own portraits against ones made by humans and keeps working on them until it is unable to tell the difference between the two.” In other words, the impetus behind the creation of Edmond Belamy was to create an image of a face that doesn’t actually exist, but is rather an approximation or an aggregate of hundreds of thousands of actual human faces. Belamy therefore looks like a smudge because he is a smudge, in the theoretical sense.

Selling an AI-generated work at auction seems like mostly a cheap gimmick to make art sales relevant and interesting to the vast majority who have no need or ability to attend one. The sale had the added bonus of enticing novelty-loving, non-art-world-types with cash to burn. To the credit of the French collective Obvious (could that name be any better), it totally worked.

The painting was projected to sell for $7,000 to $10,000. That it was purchased for 43 times the high estimate suggests that rather that being bought by an institution or established collection, it did indeed go to a single individual with considerable assets.

Hugo Caselles-Dupré, Pierre Fautrel and Gauthier Vernier of the Obvious collective are, to be frank, exactly what their name suggests. “Men are blinded by fame, power and money,” reads the caption on another one of their AI-generated paintings. And together, they’ve certainly figured out how art can capitalize on that truth. 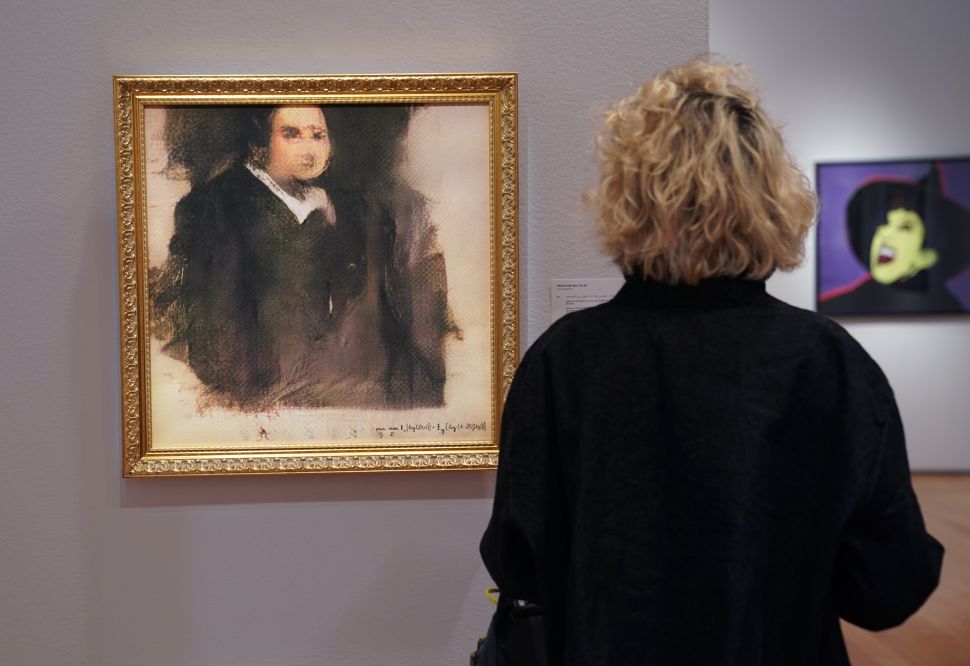