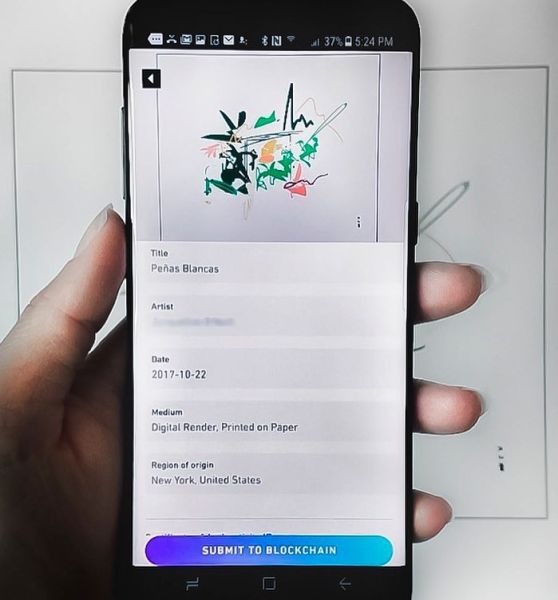 Registering an artwork on the blockchain. Blockchain Art Collective/Facebook

If you’ve ever wondered what it would be like for an inanimate object to have its own existence online, then the art industry has you covered. The short answer is: it’s possible on a blockchain, but it’s really complicated.

“If your company isn’t trying to leverage blockchain right now, it’s like you’re falling behind,” Jacqueline O’Neill told Observer. Admittedly, she’s a bit biased, being the executive director of a start-up called the Blockchain Art Collective (B.A.C.). O’Neill and B.A.C. are the newest part of a constantly growing ecosystem of start-ups testing how to use blockchain technology to standardize unpredictable aspects of the art industry.

Blockchains were created in 2008 to record transactions and account information related to cryptocurrencies like Bitcoin. This information is stored as individually numbered entries on numerous computers across a shared network. Distributing information this way prevents any individual entry from being altered or deleted. (For an in-depth look at the history and uses of blockchain, this article from Forbes is a great resource.)

What B.A.C. (along with other start-ups experimenting in the field) recognized in blockchain technology was its potential to store information about artworks—like records of sale and provenance—to provide their creators, owners and prospective buyers with an unaltered digital record of the work’s history. Basically, a truthful record of the artwork that travels with it, wherever it goes. Registering transactions on the blockchain creates an unquestionable provenance that can prevent the sale of forgeries and stolen works. Fractionalization, furthermore, could allow artists to split up ownership of an individual painting into shares spread across any number of stakeholders. By recording fractional ownership of an artwork on the blockchain, an artist could transparently raise funds for other projects while waiting for a buyer.

The stumbling block in registering art on a blockchain so far has been the question of how to match a blockchain entry with a specific, physical artwork. In the case of an artist creating multiple copies of a statue or painting, there hasn’t been a definitive way to match a digital identity to a particular edition. B.A.C. solves that by providing an adhesive, tamper-proof seal which, when affixed to an artwork, provides unalterable proof that a particular work corresponds to a particular blockchain entry.

“Every company is bringing a different cocktail of features to integrate art with the blockchain,” O’Neal noted. “Instead of offering a digital or paper certificate, we provide a seal that has an N.F.C. (near field communication) chip with firmware that gives an object a smart certificate of authenticity.”

This certificate of authenticity (C.O.A.) can never be duplicated, and the files it digitally represents can never be changed. The “smart C.O.A.” proves an artwork’s provenance beyond a reasonable doubt. The seal is tamper-evident, so as long as it hasn’t been meddled with, buyers can be sure of that the record linked to the work is accurate. Of course, any number of reasons could cause the seal to be removed or tampered with––from the mundane, like damage during travel, to the sordid, like theft. In theory, ensuring that the seal doesn’t show effects of tampering should be part of regular conservation checks so if it was altered by something as innocent as handling, the seal can be replaced.

But when being sold or exhibited, an altered seal, the absence of one when the artist has authenticated all their work, or a disabled seal should alert dealers, buyers, galleries and museums that the piece could be stolen or a forgery. Ultimately, with a critical mass of works registered, this could become a standard system for digitally recording provenance. I.e., imagine a future in which a buyer actually wouldn’t trust the authenticity of a work unless it were registered on the blockchain.

B.A.C. currently offers $20 starter-kits on their website that provide seals to register two artworks to the blockchain. Some comparable services offer certificates of authenticity for the low, low price of free, but these lack B.A.C.’s smart security features. On the other end of the scale, seeking authentication from a traditional source, such as an independent connoisseur or an auction house like Sotheby’s, can cost from $250 to $10,000 or more.

B.A.C. is still in its beta phase, but it has gained the attention of several noteworthy artists including those interested in the crypto space, like cryptograffiti, and artists working in more traditional media. Austin-based artist Nanu Berks is effusive about what B.A.C.’s seal could mean for her work, and the market generally, “They make it simple and efficient for me to tag my physical art to the blockchain, no other company has this ability right now.”

The proliferation of this technology in the fine art market is almost unreal, considering the market’s culture toward change. “Fine art professionals are traditionally slow to adopt new technologies,” said O’Neill. “The market’s current ability to authenticate an artwork, or to streamline asset management, is outdated.”

Today, 75 percent of auction houses, 33 percent of dealers, and 20 percent of galleries intend to utilize blockchain within the next five-years. That shift can be attributed to education, particularly cultural osmosis. As Bitcoin and other cryptocurrencies have entered the lexicon, a basic understanding of blockchain has followed.

Though Fanny Lakoubay, New York-based art and blockchain consultant, is cautious about gauging any company’s success at this point.

“It’s still very early. Most of these companies are one or two years old,” said Lakoubay. “They’re all trying to fight for a piece of the same pie. It very well may be winner takes all. They’re starting to focus on different kinds of art and luxury items, but there can’t be this many forever. It’s really the wild, wild West.” But even in such nascent stages, the possibilities for what blockchain could do for that other neigh-ungovernable frontier—art authentication—have a lot of artists and dealers calling this the new sheriff in town.