I got an email from Chevrolet informing me that they were launching an app named “Call Me Out,” to “help remind new and experienced drivers to keep their eyes on the road and put their phones down while they’re driving.” The app, Chevy said, was an “audible alert system” that “combines two extremely influential forces—technology and the people we love.”

Alan Batey, president of GM North America and head of global Chevrolet, told me via press release that “as the father of two daughters, I am keenly aware of all the perils that my children face in the world on a daily basis.” Call Me Out, he said, will reduce those perils and will “make our roads safer.”

Well, as the father of one son, I’m also keenly aware of the perils of distracted driving. And when it comes to those perils, the big auto companies often pay lip service to them while simultaneously filling our cars with more bleeps and bloops and distractions than ever before. Despite the fact that cars have more safety technology than ever, auto fatalities and injuries continue to rise.

Still, here was an app. Call Me Out, GM said, came from a Chevy-sponsored “Hackathon” and was then tested by students at Wayne State University. With a pedigree like that, how could it fail?

I decided to try Call Me Out. There was only one problem: I have an iPhone; Call Me Out is only available on Android.

My friend Matt, on the other hand, has an Android phone. So I asked him if he’d download the app and would be willing to test it out with me on Saturday. An offer like that doesn’t come every day, so he agreed.

He came by the house. I opened the app. The set-up screens, colored what I’d call “disgusting mustard,” informed me that to use the app, I first needed to record various warnings from friends and loved ones. Once I activated Call Me Out, if I picked up the phone while I was driving for more than five seconds, these warnings would play. Then, I’d be so ashamed that I’d put down the phone.

The app—because this is 2018 and everything has to be a contest—also contains a “gamification” element. If you don’t use your phone while driving, you can climb a leaderboard and earn points and buttons and various Chevrolet-sponsored huzzahs. At the moment, Matt and I sat at 277th on the leaderboard out of 277 people, which is how many people had downloaded the app, total, worldwide, thereby making our roads 277 times safer.

I recorded a warning to myself, in which I said, “Turn around don’t drown.” Matt recorded something deliberately whiny, in which he scolded me. “Bad boy!” he said. “Bad! Bad!” My teenage son said, “Dad, stop playing Angry Birds,” and my wife also recorded something. Then, I recorded nine seconds of my dog licking herself, and also YouTube videos of Scooby-Doo saying “Ruh-roh” twice and of Teri Garr from Young Frankenstein saying “Put ze candle back!”

With that, Matt and I got into my car and headed off to have a poké bowl for lunch.

I left the driveway with the phone in my hand and kept it in my hand all the way down the street. The app didn’t respond. We parked at the curb to see if we had activated everything properly. We had. Still, nothing.

He fiddled with the phone all the way to poké. He checked his email. He logged into Facebook. Nothing, though the app did note that we’d traveled two-tenths of a mile.

On our way home, Matt went on Snapchat. He went on Instagram. He started up his web browser. And YouTube. But no warnings came.

He did. I didn’t answer. No warning came on his phone.

He texted me the following: “Hey Neal I’m texting you while I’m driving and I’m looking at my phone instead of the road oh shit I ran over a baby and it’s stuck to my tire.”

Call Me Out continued to not call us out.

Finally, his voice appeared on the phone, warning me not to “do that.” A red screen appeared, with an animated wagging finger.

“Holy shit,” he texted me. “I wish that alarm that just went off had done so before I killed a baby and got caught in a raging fire.”

The alarm didn’t go off again.

We parked in my driveway. He logged into the app. It asked him if he was a passenger or driver. Driver, he said.

“Put ze candle back,” the app said, even though we weren’t driving.

We’d driven two miles and were still 277th out of 277. But now that the app appeared to be allowing us to play, we tooled around the neighborhood for a little while. Call Me Out started bleating warnings. Matt was on the app, and only the app, and the app did not approve.

If you have an Android phone, and if you’re addicted to logging into an app that tells you not to use your phone while driving, then Call Me Out might be a lifesaver. Otherwise, well, you might already be dead. 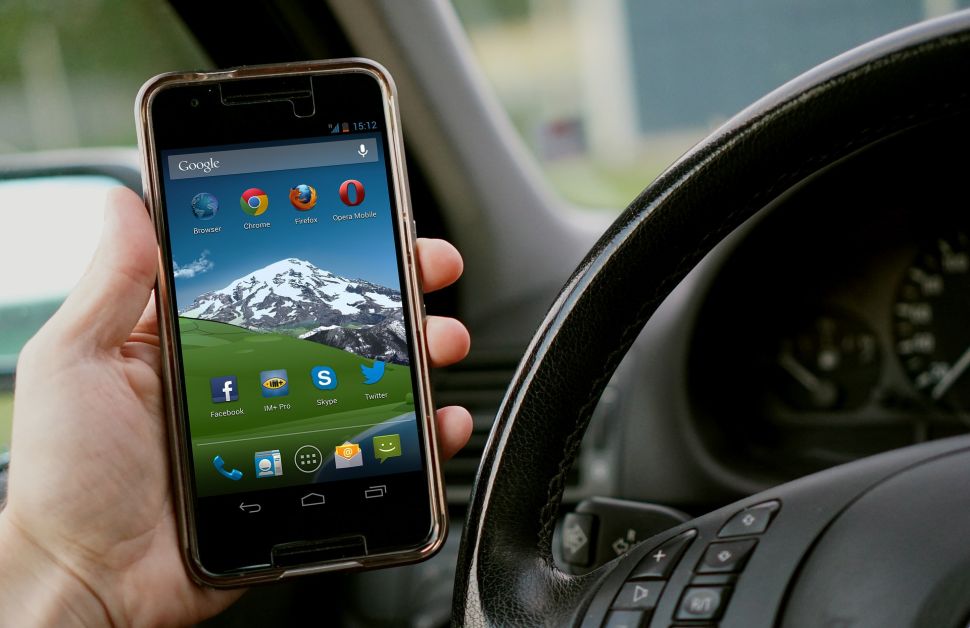