Halloween is sauntering up to us like Michael Myers holding an insulin shot. And just like the movie franchise, one of the most identifiable Halloween candies, candy corn, is making its comeback.

I’ve always thought of candy corn as seasonal, showing up for a month or two in the fall and then disappearing entirely for the rest of the year. As someone who once purchased three pounds of Lemonheads off Amazon, however, I found it impossible to accept that candy corn could only be a Halloween treat.

It only took a few searches before I found myself staring a five-pound bag of candy corn in the face. It was mind-blowing. Are people able to buy this stuff out of season?

As it turns out, they are.

Those numbers seem small, until one realizes that almost nine billion pieces of candy corn are produced each year, according to CNN, and the treat generates $36 million annually in sales. In total, people are spending $10.8 million on out-of-season candy corn, which is about as much money as all of the players in the WNBA make in a year combined!

This discovery raised a number of questions, namely: Who are these sickos buying candy corn in the middle of June? What drives them to such madness? Is this candy corn even fresh? Or is it leftover from Halloween? Is this just an online thing? Or am I missing it on the shelves as I dive for a pack of Sour Patch Kids.

A short conversation with a Duane Reade employee taught me that the shop doesn’t receive in-store shipments of candy corn until Halloween time rolls around. It quickly became clear that the internet was to thank for this newfound Candy Corn Wild West. I did some digging through Amazon reviews and identified three main reasons for buying candy corn off-season: A) “I just really like candy corn;” B) “Someone I love really likes candy corn, and I wanted to do something nice for them” (but if that’s the case, how much do you really love them?); and C) “I needed it for an art project.” (Translation: I am too embarrassed to admit I wanted to stuff my face.)

I dove into the reviews. Many were positive, but more than a few complained of the candy showing up in one giant block, or as a stale mess.

It seemed like companies could be selling their leftover candy corn to poor suckers who can’t wait until the next Halloween. According to Lisa Rowland Brasher, president and CEO of Jelly Belly, however, this is not the case.

“Jelly Belly makes candy corn all year long,” said Brasher. “While a lot of our candy corn sales are tied to the fall and Halloween seasons, it is in demand from January through December. Candy corn fans know they can expect our candy corn to be smooth and creamy, so they seek it out year round.”

But this doesn’t explain the staleness that last consumer experienced.

In order to get to the bottom of this issue, I got in touch with Beth Kimmerle, a confection expert and author of four books on the American candy industry, to talk about what could be going wrong.

According to Kimmerle, candy corn can conglomerate into a giant block during shipping, though she agrees with Jelly Belly, and most Amazon shoppers, that this is not that common of an occurrence, seeing as temperatures inside the delivery truck would need to reach over 100 degrees during the journey.

There is some moisture in candy corn that gives it the texture that we love—or really hate—but when the candy heats up, air starts to get released, more moisture gets in, and it becomes stale. If gets introduced during transportation, which Kimmerle says is unlikely, mold can form.

“As it goes through heat and cold, it loses some of its textural qualities and that’s where it gets really hard and stale,” said Kimmerle. “Particularly, if it hasn’t been packaged properly and it’s been subjected to all this hot and cold.”

Really, it depends on where you are shipping your candy from, or receiving it, said Kimmerle. Meh.com, known for their often goofy daily promotions, purchased three tons of Brach’s Candy Corn in August of 2017 and sold it to customers in seven-pound increments, shipping it out in the Texas heat. More than one person complained that their sugary kernels showed up melted.

But the candy might not have melted in either state, according to Kimmerle. Brach’s, which could not be reached for comment, as well as other candy companies, have started crossing the border to Mexico, a place not known for its cool temperatures, to build factories because the sugar is cheaper and not as impacted by tariffs.

There are some drawbacks to this form of production: namely, the company has less control over the process, and the candy has to travel farther than it did ever before.

“A good thing to do is sort of use your senses and really look at a product and then see where it’s made,” said Kimmerle. “Because I think the chances of it being compromised are just greater if it’s from elsewhere.”

It is also possible, though very hard to confirm, that candy corn is being left out for months at a time in some warehouse and becoming stale.

In reality, however, it seems that history is repeating itself. Back in the late 1800s—when candy corn hit the market as a hip, new, innovative treat—there was no way to chill the candy corn presses during the summer to prevent melting. Capitalism must bow to nature sometimes, and production could only take place during the cooler months, making it a prime candy to be marketed at Halloween.

Today, new technology (namely kitchen weaponry and advanced refrigeration) has allowed us to spit in the face of mother earth and eat our favorite treats all year round.

As a follow-up sale, the good people at meh sold bags of candy corn with a knife to use to break it up, in the event that the candy showed up disfigured. “Hilariously, this led to complaints when some people’s candy corn arrived *not* melted into a brick,” said Dave Rutledge, CCO and co-founder of Mediocre Corporation, which owns the meh website.

The best solution to this candy corn issue? Simply hoard a bunch of candy corn during Halloween and then dip into your stockpile throughout the year.

“Buy it in-season and then store in a freezer,” said Gregory Ziegler, a professor of food science at Penn State University. “Store it in a nice sealed container and that will prevent all these bad things from happening.”

Melted or not, thanks to modern production technology and innovative shipping, candy corn will always be there when we need it most, even if that time isn’t during Halloween. 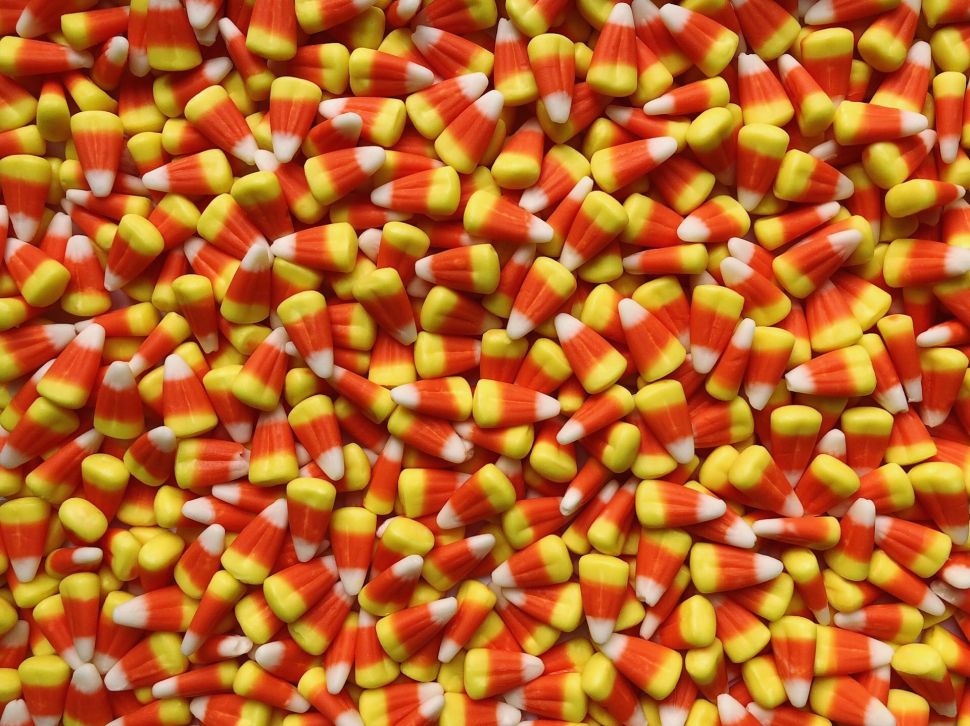