There is a conspiracy theory percolating throughout the right-wing ecosystem that Christine Blasey Ford was hypnotized into believing Supreme Court Justice nominee Brett Kavanaugh assaulted her as a teenager.

“I’ve never seen so many repressed memory cases in my life, especially against one guy,” Fox News anchor Jeanine Pirro said of Kavanaugh’s accusers on-air last week. “My question is, if there’s something awry going on, was there hypnosis, are they using confabulation?”

This explanation was given new life on Tuesday after Margot Cleveland—a freelance writer for The Federalist, National Review, Townhall and Washington Examiner—unearthed a research paper Ford coauthored alongside 11 other researchers titled “Meditation with Yoga, Group Therapy with Hypnosis, a Psychoeducation for Long-Term Depressed Mood: A Randomized Pilot Trial.” Cleveland pointed to the fact that participants in the trial “were taught self hypnosis” to “create artificial situations” as evidence that Ford may have constructed fake memories.

The tweet has since racked up over 6,000 retweets and was promoted on The Gateway Pundit.

But professional mentalists are calling the conspiracy theory “hogwash.”

BREAKING: This is HUGE (waiting for permission to h/t): One of Christine Ford Blasey's research articles in 2008 included a study in which participants were TAUGHT SELF-HYPNOSIS & noted hypnosis is used to retrieve important memories "AND CREATE ARTIFICAL SITUATIONS." pic.twitter.com/11n1JVnArM

The new MAGA Twitter claim about Blasey Ford is that she somehow self-hypnotized herself into believing the assault was real.

“You can’t hypnotize yourself into believing a lie,” Eli Bosnick, a mentalist and skeptical lecturer, told Observer. “You can relax with hypnosis, there are even studies showing it helps with chronic pain, but the idea that you can alter the sub or conscious mind is largely debunked pseudoscience.”

“My own position is that there is absolutely no shred of evidence on the face of the earth that hypnotism can create false memories,” added mentalist George Kresge (AKA the Amazing Kreskin).

As the inspiration behind the 2008 Tom Hanks movie The Great Buck Howard, Kresge currently offers $100,000 to anyone who can scientifically prove that hypnotic trances exist, and has called sensationalism surrounding the practice “mumbo jumbo.” Although the mentalist refuted any correlation between hypnosis and false memories, he did stress that memories can be planted through suggestion.

“A person often becomes highly susceptible when their emotions are aroused,” continued Kresge. “It tends to contaminate memory. It’s purely the power of suggestion.”

This is Fox News

The practice of resurfacing memories, both real and imagined, most closely resembles recovered memory therapy. But this method is also controversial, and unlikely applies to Ford.

“She never said she went through recovered memory therapy when she first went to couple’s counseling with her husband in 2012. Those are well-known pseudosciences by then,” explained Bosnick. “The chances of a therapist using that are like a therapist using trepanning.”

“It tends not to happen with mentally-well adults,” added Bosnick on how often patients construct false memories. “Also, Ford as a psychology professor would be well aware of ‘Michelle Remembers’ and the Satanic Panic.”

As a largely discredited psychology practice that does not even appear in the DSM IV, recovered memory therapy was mainstreamed throughout the ’80s following the publication of Michelle Remembers—a literary hoax which sparked a Satanic panic over its depiction of memory recollection. But it is the ensuing hysteria, rather than easily discredited science, that is applicable to Ford’s accusations.

“Pizzagate, QAnon, all that modern craziness that we feel like sprang from the internet is church panic retrofitted for the internet,” said Bosnick.

“When they’re propagating these theories, we have a new factor in our culture. We have mass suggestibility,” explained Kresge. “And the internet reinforces things. We have the power now to make things so contagious they can get out of control.” 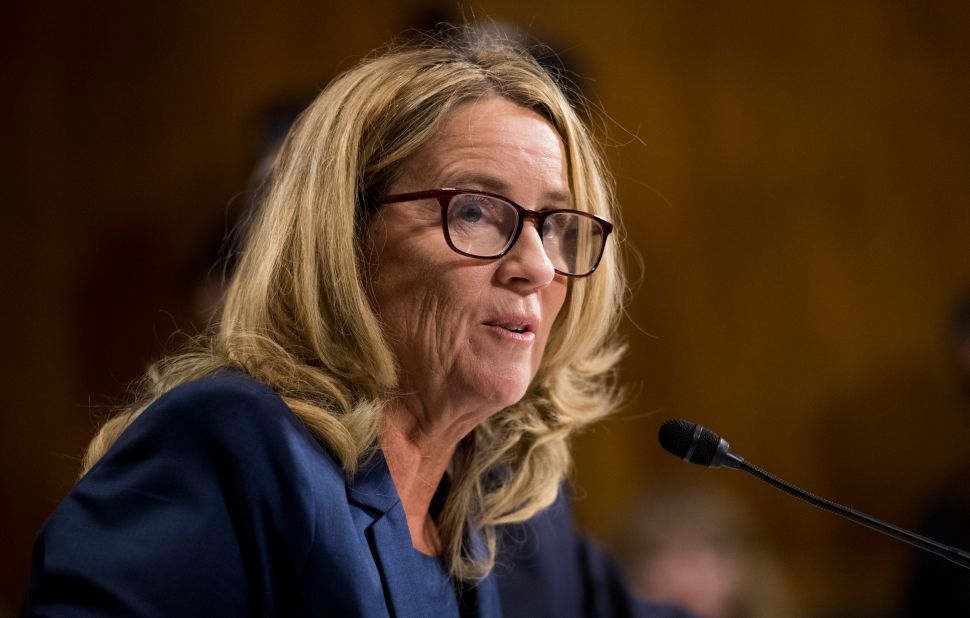