Though usually set in modern times, the Coen brothers’ films have often drawn heavily from old Westerns. In their newest, The Ballad of Buster Scruggs, the Coens return to their source of inspiration, presenting an eclectic and at times wildly entertaining film, but one that ultimately feels toothless—paling in comparison to its predecessors.

After premiering at Venice in August, Buster Scruggs is having its second outing at the 56th New York Film Festival. Before it even begins, the first image to appear on screen makes it clear this is not your usual Coen brothers film—it’s the vibrant red N of the all-consuming You Know Who, marking the brothers as the next in the line of celebrated indie filmmakers to jump into bed with streaming services. But though it might not be the Coens’ best, make no mistake, this is nothing but a win for Netflix as it further sets its sights on conquering cinema.

As for the film itself, the title might deceive you: The Ballad of Buster Scruggs isn’t really about its titular character. Rather, that story about a  singin’, gunslingin’ outlaw charmingly portrayed by Tim Blake Nelson is only one in a total of six stand-alone stories. The brothers initially paired with Netflix for an anthology series, but somehow wound up with a movie instead. Yet since the streamer is rumored to be aggressively readjusting its film division’s approach, we don’t think they lost any sleep over nabbing a feature-length picture from a pair of four-time Oscar winners.

Each chapter adapts a classic tale from the Wild West. One follows the aforementioned Buster discovering a gun faster than his own. Another stars James Franco as a bandit in a bank robbery gone horribly wrong, and yet another features Liam Neeson as a weary and desperate traveling showman.

They say a chain is only as strong as its weakest link, and that’s certainly true for anthology films. Fortunately, every story manages to be interesting, and not a single one stands out as the rotten apple of the bunch. A central law of Coen brothers’ films also holds true in Buster Scruggs: Punishment is frequent, but reward is rare.

The tone tends to sway a little, though. Some stories are downright comedies, others outright tragedies. A change in genre brings a drastic change in expectations, often faster than the audience can adjust. The result is a bit jarring, but also keeps you engaged from story to story, and the effect can be potent. The cruel, unexpected hand of fate strikes in every story, and even if some chapters don’t fully connect, viewers can easily take it in bits thanks to the episodic structure. It really is the best kind of movie for a streaming service—perfectly suited to be watched in interruptible viewing chunks.

But while the Coen brothers turn the inconsistency of tone to their advantage, the same can’t be said for pacing. The first two stories, those headlined by Nelson and Franco, are the most lighthearted and action-packed. The next four, on the other hand, are dark and serious—hardly a single gun fired.

The amount of dialogue dips as well, especially during the third and fourth stories. One of the two is about a lonely (and a little delusional) prospector, so that’s understandable. The other, however, is about the fascinating bond between Neeson’s showman and his limbless performer (Harry Melling), a dynamic that would have benefitted from further exploration through conversation. Thankfully, the pacing picks back up in the fifth story, which is (or rather, felt like) the longest of the six. It had an incredibly slow-build up, but the result was worth it: a well-executed, tense, and emotionally charged climax that’s easily the highlight of the entire film.

Buster Scruggs works best when it’s not compared with the classic Westerns it parodies, but against other contemporary adaptations that try to remove all the unrealistic romanticism embedded in the source material.

Like HBO’s Westworld, for example, Buster Scruggs stacks up a collection of stunning vistas of prairies, deserts and valleys that bring the Wild West of our imagination to life, only to kill it right in front of our eyes. Westworld does this by dousing the proceedings in sci-fi trappings; the Coen brothers do it through their trademark existential storytelling. Their characters are not invincible, moral Cowboys; they’re imperfect and at times dishonest people, completely at the mercy of the world they live in.

Many of the Coen brothers’ films don’t really go anywhere, in the end. The Dude (Jeff Bridges) scatters his friend’s ashes after he’s been shot and killed in a random shootout; killer Anton Chigurh (Javier Bardem) limps out of frame after he being severely injured in an incidental car crash. The message is the same in Buster Scruggs: It’s about the journey, not the destination, because there is no destination. (Sounds a lot like the endless journey of streamer-surfing, doesn’t it?) But it can’t be denied, the impression lasts far longer when you’ve spent two hours with a character, rather than 20 minutes.

The Ballad of Buster Scruggs will be available on Netflix on November 16. 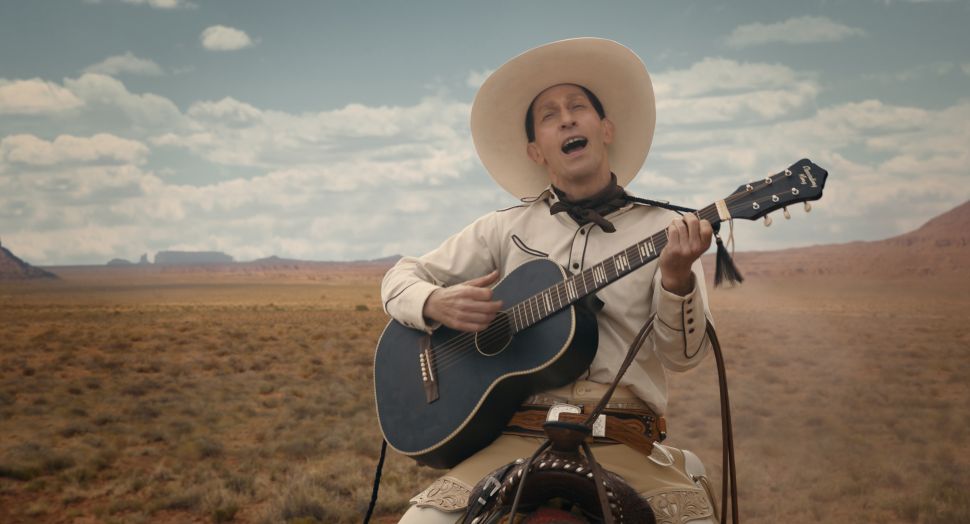