In more than 50 years as a professional critic, journalist and novelist, I have learned to dread three things: writer’s block, last-ditch up-all-night deadlines, and fact-checkers. All three nightmares play a part in the new Broadway play The Lifespan of a Fact. My reaction to the finished product, like the troubled magazine essay the play is about, is that the product will never be finished. But the finesse of Leigh Silverman’s direction and the polished comic timing of the three glorious stars onstage at Studio 54 guarantee a helluva good time.

Based on a real incident, here’s the simple outline. In 2002, John D’Agata (dynamic Bobby Cannavale), a writer stationed in Nevada, was assigned a magazine piece about the suicide of a teenager who leaped to his death from the roof of a hotel-casino in Las Vegas. The delicate, detailed essay he turned in was declared a literary masterpiece that would not only save the magazine from extinction (an unlikely prospect since the magazine was Harper’s) but instantly elevate the writer to the status of a Norman Mailer.

The piece was eventually turned down, but found its way to the pages of a classy but obscure publication called The Believer. Then the editor (fictitiously called Emily Penrose and played to authoritative perfection by the great Cherry Jones) assigned an inexperienced intern named Jim Fingal (Daniel Radcliffe), who majored in computer nerdism at Harvard but knew nothing about writing, to fact-check the piece. She gave him one weekend to do it. By his Monday morning deadline, an inexperienced but ambitious kid green as split pea soup had flown to Vegas, come to blows with the famous writer, turned the magazine upside down, driven both the author and the editor to a nerve-shattering state bordering on insanity, and turned a 15-page essay into 130 pages of questions alleging errors, artistic license and downright lies.

Outraged, the harassed writer refused to answer the fact checker’s phone calls, so Fingal flew to Vegas and showed up at his house, reducing a calm and self-assured writer to violence. He got off to a bad start by calling the essay an “article,” but the questions that followed, demanding clarifications to every fact, began on the first sentence of the first paragraph on Page One and continued in red pencil through a stack of notes and objections higher than ten years of old Sears Roebuck catalogues.

By the time the editor flies to Vegas herself on the next plane to straighten out the mess, we’ve waded through every minute detail of the fact-checking process, which is not especially interesting because the task of copy editing itself has never been interesting. Pedantic, irritating and a royal Pain in the you-know-what, Daniel Radcliffe (bearded, toned and looking nothing like Harry Potter) is very funny as the marauding ant at the exasperated writer’s picnic, challenging every detail, from the time of death to the details on a bottle of Tabasco sauce. Bobby Cannavale is laugh-out-loud funny as the poor writer at his mercy. And Cherry Jones is delightful in a lighter role than usual, caught in the middle, trying to achieve some balance and get her magazine out on time.

Was the hotel-casino really 1,149 feet high? Prove it. Are there 34 strip clubs in Vegas, as the author claims, or only 31? Were the brick walls red or brown? The tug of war between creative writing and the rules in the dog-eared Associated Press style book used by many editorial staffs to this day provide food for thought. Ask any writer and we’ll tell you: the facts define the truth, but the truth changes daily. Fact checkers can lead you to a glass of arsenic in record time, wrecking your style, rhythm and impact. But in an age when a sitting president runs an entire country with a stupid Twitter account, nobody knows what to believe. If an author is not allowed to translate basic facts into literary human theatre, replete with imagined dialogue, then Truman Capote’s masterpiece In Cold Blood  would never have made history.

Fact checkers are a necessary evil, I guess, but I never heard of a rookie fact checker on the bottom rung of a notoriously low-paying magazine flying from New York to Nevada at his own expense to find out the correct number of traffic lanes leading to a casino entrance. The exaggerated fact checking in this saga took seven years. Both sides of the argument joined forces to co-author a book in 2012 from which this 90-minute play without intermission is based. The result is both valid and tiresome. You are left with the uneasy impression that the three playwrights—Jeremy Kareken, David Murrell and Gordon Farrell—are still fact-checking each other. 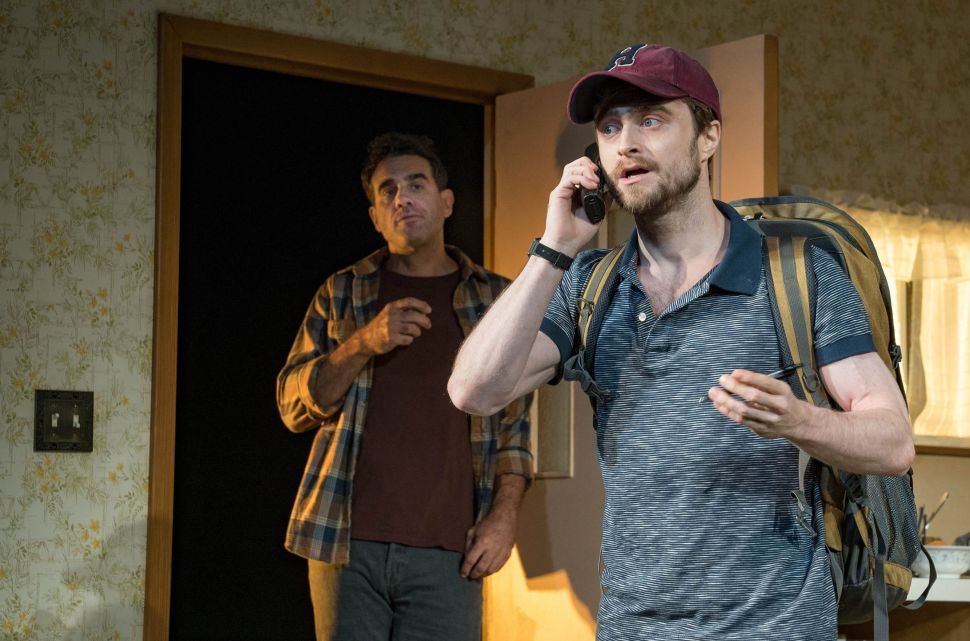