The Federal Bureau of Investigation occupies an exalted and somewhat awkward position in American society. It’s simultaneously our lead federal law enforcement agency, with a broad remit, and our main domestic intelligence agency. The FBI catches Mafiosi, bank robbers, spies and terrorists, among other duties. Its national security activities are protected by a steep wall of classification. Although it rankles the FBI and its defenders, using the term “secret police” to describe the storied Bureau is not inaccurate.

One of the FBI’s missions, which is little understood by the public, is its role in conducting background investigations of senior executive branch officials. Supreme Court nominee Brett Kavanaugh, currently besieged by allegations of sexual misconduct, successfully passed no less than six FBI “BIs” (as they’re called in the trade) during his federal career in Washington, which stretches back to the early 1990s.

Since such BIs include a comprehensive look at the applicant’s personal and professional life, to include finances, foreign contacts, illegal activities, addictions, and even mental fitness, how someone as manifestly unfit as Judge Kavanaugh—if you believe the evolving Democratic accusations against him—could have passed FBI muster six times does seem more than a little odd.

However, there’s no shock at all among those who understand how such checks are done. To start, an applicant’s youthful drinking habits are not much discussed, unless they resulted in rehab, arrests or expulsion from school. While the FBI does track down and talk to the applicant’s friends and colleagues, they do not hunt down every person who may have something derogatory to say, going back several decades.

If the applicant has led a legally clean life—no major arrests, no repeat bankruptcies, no court-ordered treatment programs—he or she is likely to meet Bureau standards. The BI system is rigorous but imperfect, and it can’t be flawless unless the FBI is charged henceforth with undertaking Stasi-like examinations of people’s entire lives back to childhood (which is something nobody sane wants, least of all members of Congress, who possess more messy secrets, per capita, than the rest of the country).

Now, however, since the Senate Judiciary Committee can’t figure out what to do with Kavanaugh’s increasingly shambolic nomination, the FBI has been charged with sorting it out. Last Friday, dissident Republican Sen. Jeff Flake of Arizona, a bitter opponent of President Trump, said he wanted the Bureau to look at the judge one more time, as Democrats had demanded, and the FBI follows orders. Under White House guidance, the Bureau has spent the last several days trying to unravel the sexually-related accusations which have been hurled at the judge in recent weeks.

The White House has limited this inquiry, as it is allowed to do, and as of now there are reports that neither Judge Kavanaugh nor his main accuser, Dr. Christine Blasey Ford, have been interviewed by the FBI. This may be less nefarious than it sounds. After all, what more would Bureau agents glean from talking to Kavanaugh and Ford than they have already provided to the Senate Judiciary Committee orally and in writing?

Certainly, interviews with Kavanaugh and Ford might offer the FBI a chance to trip them up, to catch them in inconsistencies and perhaps even lies—but does anybody on either side of the aisle want to risk that with their “star” witness, at this late date in Kavanaugh’s confirmation process? We can be certain that the FBI has been busy the last few days interviewing people who may be able to shed light on Judge Kavanaugh’s personal habits. Whether they have uncovered much of anything is another matter.

The FBI’s supplemental report on Kavanaugh is likely to be based on nothing more than a collection of interview summaries, called 302s in the trade, from people recalling long-ago events. These are statements, offered without FBI comment or editorial. It is to be expected that some of these 302s will contradict each other—slightly or even significantly. Sorting them out will fall back on the Senate, and that promises to be just as nasty as everything about the Kavanaugh nomination has been on Capitol Hill.

There won’t be much more to go on. Since Dr. Ford can’t be sure of the year or the location of her alleged assault at the hands of Brett Kavanaugh and his friend Mark Judge, then an admittedly boozy teenager, there’s nothing for the FBI to do except hope they find someone with new information. While that’s certainly possible, partisans on both sides should not expect bombshells to resolve this political morass for them. Investigations aren’t magic and FBI agents, though highly skilled, aren’t magicians.

Then there’s the tricky spot which the Kavanaugh conundrum places the FBI in. Nobody sensible in the Bureau wants anything to do with this highly charged mess. No matter what the FBI discovers, half the country is pre-programmed to dislike and probably reject it, facts be damned. And if the Bureau doesn’t uncover much of anything substantive—a serious risk, given the short timeline it has—it looks bad to everyone.

The FBI entered this scandal enjoying a terrible relationship with the White House, one that’s entirely of President Trump’s creation. Since his first week in office, he’s pilloried the Intelligence Community generally and the FBI especially as nefarious agents of the (entirely mythical) “deep state,” which, according to Trumpist true-believers, has been out to overturn the 2016 election by any means necessary. Many have been the ugly tweets emanating from Donald Trump and his “Modern Presidential” feed. That the Bureau is a hotbed of liberals, much less fans of Hillary Clinton, would be news to anyone who’s ever been near the FBI, but facts seem not to matter to Team Trump.

Now the FBI is facing heat from Democrats, too. Already some on the Left are making worrying statements that the Bureau isn’t doing its job properly, that it’s insufficiently rigorous in its pursuit of “the truth” about Judge Kavanaugh, even decrying the new inquiry as “a farce.” How times change. Ever since Donald Trump took the oath of office 21 months ago, Democrats have hailed the FBI and its leadership as defenders of truth and democracy against the White House and its nefarious, Kremlin-linked minions. How happy liberals will be with the FBI if it fails to uncover any “smoking gun” about Brett Kavanaugh is an important question that we may soon have have an answer to.

Whatever the FBI finds, Republicans and Democrats alike would serve the country well by stepping back and not reflexively attacking the Bureau. The FBI and its agents are not the cause of the deep partisanship that is tearing apart our nation’s capital and our politics. Neither can they be expected over one week to remedy these terrible challenges, which are decades in the making. Our failed political class should look elsewhere for scapegoats for the Kavanaugh mess; a glance in the mirror would be a good start. Let the Bureau do its job and accept its findings, whatever they may be. 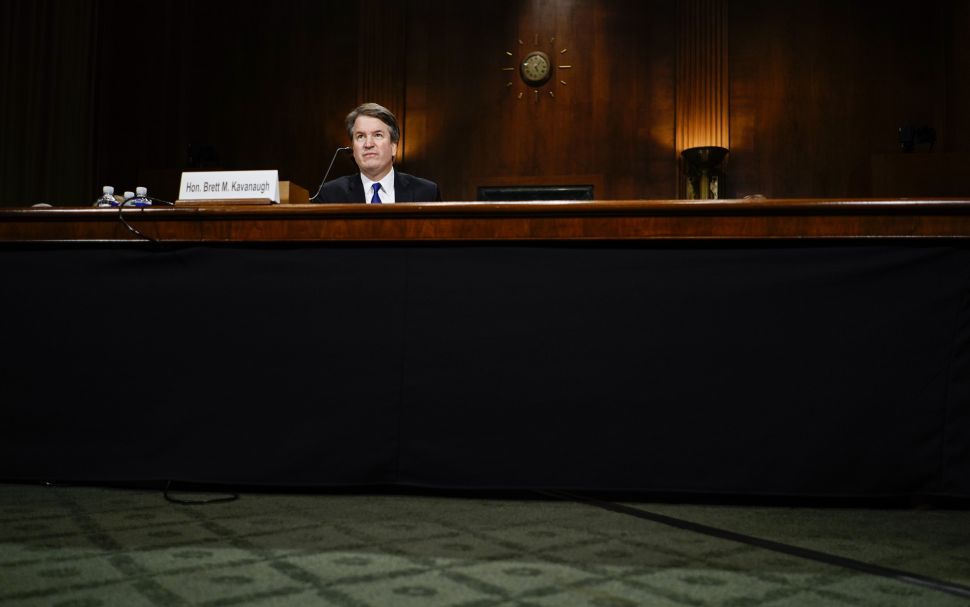