Dario Argento’s Suspiria is considered one of the greatest horror films of all time, and rightfully so. It is shot in stunningly rich colors, packed with haunting imagery and its classic score by the Italian band Goblin remains intoxicating to this day. But it is also pure Argento pulp, a moody slasher that’s mechanically driven by the allure of mystery. And while it’s backed up by thematic flourishes and a rich lore, it’s still largely grounded in his usual broad archetypes. So with such a distinct filmmaking voice, how do you even go about remaking such a movie? Well, if you’re Luca Guadagnino, you apparently dispense with all the aesthetic hallmarks and turn your version of Suspiria into one of the most visceral and thematically dense films of the year.

We feel this density from the onset. Guadagnino takes us directly back to the 1977 of the original only this time we’re thrown into the complex political era of the “German Autumn.” A rocky political time when the young and disenfranchised leftists of Germany were rising up to fight the lingering and resurgent influence of Nazism, it serves as more than just a paranoid backdrop. We’re talking about one of the easiest historical metaphors in the world with a city that’s literally divided. But that’s not to ignore the fact that the era was even more twisted in knots with Germany’s generational history, not to mention the Soviet Union’s influence on the situation. In short, it was a time of facing horror and revealing and unleashing more horror in the process. It’s also worth noting that one of the leaders in this tumultuous time was a young woman named Ulrike Meinhof, and you can sense the importance of this spirit seeping into the fabric of a movie driven by the spectrum of female personhood.

Because, back in the killer ballet school, we get a full view of the coven at work. There is no real mystery being played. We listen to Madame Blanc (Tilda Swinton) and her fellow witches discuss the torture of students as they sit and read newspapers, a gesture so hilariously casual, but also peppered with strange amounts of empathy for the same students. It’s almost like they’re playing favorites with victims and inductees. As for the symbolism of their actions, Britt Hayes at Screen Crush lays out the ideas more brilliantly than I ever could, from insights into the coven’s dynamics and the connections to Argento’s The Three Mothers Trilogy, to the feminist implications of Klemperer’s doubts of women’s pain and why he was being chosen as a “witness.” But I specifically loved the way she noticed that the film played into four distinct archetypes outlined by Carl Jung, “rebirth, mother, spirit and trickster.” For this piece, I want to talk about the intersection with one of Jung’s other major ideas, the notion of the “shadow self.”

The shadow self is a Jungian archetype that deals with the subconscious. Or, as Mateo Sol explains on Loner Wolf, that which “forms part of the unconscious mind and is composed of repressed ideas, instincts, impulses, weaknesses, desires, perversions and embarrassing fears. This archetype is often described as the darker side of the psyche, representing wildness, chaos and the unknown.” We first get a clear sense of this through the main character, Susie.

Initially she seems just a fresh-faced girl from Ohio, eager to make strides into this esteemed dance company. But her shadow self is soon awoken, which we are meant to fear. Susie unleashes her libido as the rapturous demon below claws at the floor. She turns deeply sexual, almost becoming carnal as she writhes to the ground. The connection is made all the more explicit in a flashback when we see Susie’s mother punishing her for masturbating, a clear illustration of her repressed sexual drive. But the shadow self always manifests in some way, with unintended consequences. This is made terrifyingly literal when Susie is hexed and her dance moves contort and kill another girl a floor below.

But the members of the coven are largely ignoring their shadow selves too. Sure, they go on with their fun, irreverent ways, but the hidden realities soon break through. For instance, there’s a young woman in glasses who consorts with the coven, but she almost seems a hexed slave—a literal pair of eyes used for the coven’s own observation. But when she gets a sudden moment of free will during a dinner? She immediately grabs the closest knife and stabs herself in the neck. The rest of the witches scream and despair about how they just slipped for a second, but it’s all part of the internal push-pull with the thing they are not facing. Their nonchalance is part of their sublimation. But Madame Blanc’s shadow self is different, because the thing that clearly stirs within her is a deep desire for—and also to protect—Susie, which ultimately costs her. And it fits her, too. Sure, Blanc is committed to being a witch and servant of Mother Suspiria (also called Mater Suspiriorum), but she is also the most unsure about the mysterious plans of Mother Markos, the original founder of the school.

When we eventually meet Mother Markos at the final ceremony, we come face to face with the matriarch who wants to achieve the transcendence of godliness—to become like and take her place as one of the three mothers of lore. But her “pure” wish is actually that of pure selfishness. It’s the very essence of Greek drama, in that she is challenging the fates (and that does not often go well). To explain with Judeo-Christian rhetoric, it’s breaking the commandment of “Thou shalt have no other gods before me” and all that. And thus, Mother Markos and all her most loyal pay for their crimes when Susie’s big reveal comes.

Yes, Susie is somehow Mother Suspiria. I’m sure the more logically-driven will try to figure out exactly how this was clued in from the pieces of the story, and whether it was all planned or instinctual, but the thematic point of this reveal is all the same. After all, it’s no accident that we see a literal shadow monster of the black demon emerging from below while she boldly proclaims “It is I.” This her symbiosis with her shadow self—the one that’s been hiding below. It also represents her acceptance of who and what she is. And in a world where everyone is contorting and justifying and hiding, no one is facing what’s really driving them, nor understanding what they do or not deserve. Which is likely why Susie spends the head-splattering finale going around asking the girls who they worship and what they really wish for. This is the expunging catharsis.

Which brings us to one of most interesting details of the movie: the reveal of Klemperer’s shadow self. For much of the movie, we spend time with Klemperer watching how he mourns his wife, remembering their history and hopelessly searching to find out what really happened to her (she was Jewish and trying to escape just as things started to get really bad in Germany). But even now, he lives in the ruins of their life together, going back to their old house, always touching an innocent heart written on the side of their first home. But when he’s pulled into the school comes the reveal (while the witches castigate him) that his wife warned him they should leave Germany, but he never listened. Just as he never listened to his female patients who were telling him the truth. Just as men never listen when women tell them things that are true. This shadow truth, the idea that Klemperer did not heed her warnings, is the guilt that drives everything about him.

But Susie ends up sparing him not just once, but twice. First when he leaves and then again, in his bed, when she reveals to Klemperer that his wife died soon after in the camps, being supported by other women who were there. He writhes and cries, finally hearing the terrible words he’s longed to hear confirmed. It’s a heartbreaking moment, an approximation of everything the film’s unleashed so far. But then? Susie makes him forget it all, uttering the words “we need shame and guilt, but not yours.” There is a way of looking at this gesture, in light of the decades and decades that he’s been unable to let go, in a positive way. It speaks to the healing notion of learning to forgive yourself and finally evolve beyond traumas, even ones that are self-inflicted. And Susie also makes it clear we know shame and guilt are powerful, we even saw it motivate Blanc’s hesitance at the ending ceremony. (Which costs her her life…sort of. That last comic beat of her head coming back on is amazing.) But in a negative light? I can’t help but worry about this ending gesture quite a bit.

To the point that it’s still on my mind a week later. Because when Klemperer begins the story, he’s still doubting his patients. He’s still not listening. And now, after all of it, he has been made to forget all that he has learned. Forgiven, he can now move tranquilly—in peace. Meanwhile, all the women’s bodies lie torn to pieces and obliterated and there’s hardly any forgiveness in sight. And I can’t help but wonder, is this a confused message or what was really trying to be said? Or is it part of the horror of the narrative? Would a female storyteller have made this choice? Or is forgiveness O.K. as long as those who are forgiven finally come to understand? Or maybe the film has equal venom and forgiveness for all. Or perhaps I merely projected my own need to approximate my lingering personal guilt into the movie. I could go on with a million questions, but I think the deeper nature of my worry is the timing.

Because we live in a current state in America where no one is remembering the lessons of America’s ugly underside. And I’m not talking about the naked hate of far-right fascists. I’m talking about those who, like Klemperer, “didn’t realize Trump would be this bad.” And even now, many older white people still fail to grasp the horrific gravity of the situation or stare the horrors of our current day in the face. So when I think about the German Autumn and what it means to cinema in 2018, I don’t think about a wall, nor do I think of forgiveness. I think about an ouroboros, ever coiling and trapping us in the same horrors we keep forgetting. In America, we constantly fail to reckon with our greater shadow self. And it’s a notion that paints the final image of the film in an entirely different light. What could seem like the fading heart etched on the wall, a mere fading relic of bygone era, instead feels like a haunting sign. Because life went on, but here we are again at the doorway of horror.

So whose shame and guilt do we really need? 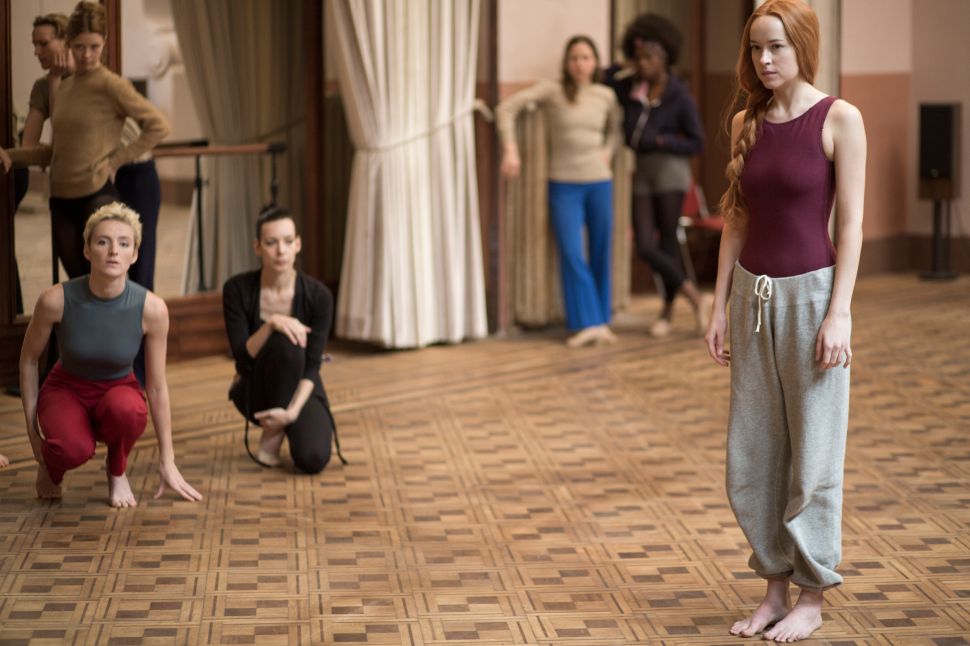