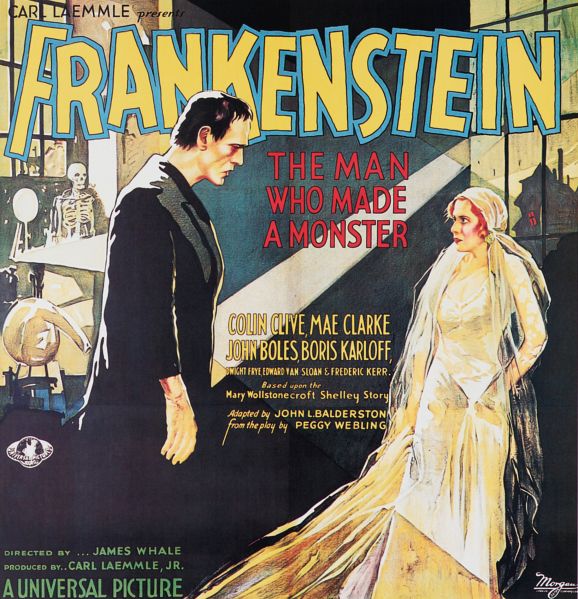 Carl Laemmle Presents Frankenstein: The Man Who Made a Monster, 1931 poster. The Morgan Library and Museum

Mary Shelley was only 20 in 1818 when she published her novel Frankenstein, about a scientist who brings a corpse back to life. “It’s Alive, a Visual History of Frankenstein” at the Morgan Library and Museum (through January 27, 2019) follows that tale through its conception to afterlives on stage and screen, telling of its many adaptations through illustrations, comics and movie memorabilia.

Today everyone knows Frankenstein, or perhaps we just think we do. Here are some aspects of the myth and its many apparitions that you may not have known.

The story of Frankenstein was entirely invented by its author.

Unlike Dracula (which had folkloric antecedents) or just about any other classic wild tale, like Moby Dick (which built on its author’s adventures at sea), Frankenstein had no existing sources for its tale of reviving a monster found under arctic ice. “That’s the thing…she really made it up,” said the show’s co-curator and catalogue author Elizabeth Campbell Denlinger.

Since then, Mary Shelley’s novel has been dissected and borrowed from and infused into media and merchandise ad nauseam. To set the mood that spawned this classic, curators at the Morgan stir up the miasma of gothic tales and ghoulish imagery that were all the rage at the time, and which Mary Shelley may well have known. On view is Henry Fuseli’s painting, The Nightmare, 1781, an exquisite female figure sprawled in sleep with a demon-like creature sitting atop her that introduces a macabre tone. “Fuseli was everywhere then. Mary Shelley would have seen that image,” said Denlinger. 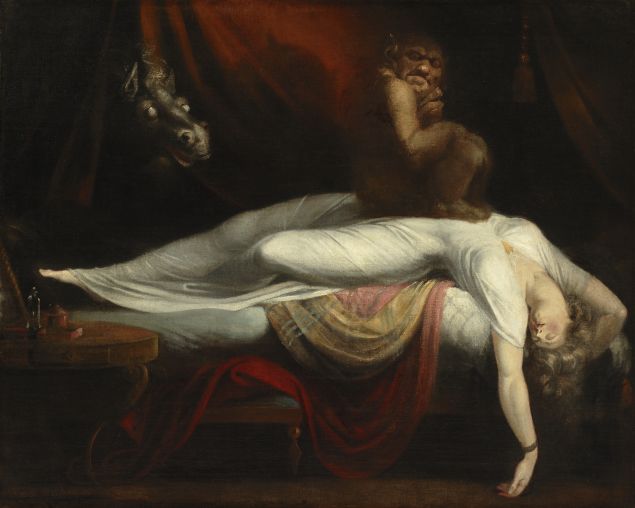 After Mary Godwin, later Mary Shelley, took up with her future husband, the poet Percy Bysshe Shelley, Mary’s step-sister, Claire Clairmont, decided that she needed a poet in her life too. In 1816, she seduced Lord Byron, not a man to turn anyone away, who then departed for Switzerland with his personal physician.

Claire and the Shelleys followed, staying in two houses on Lake Geneva. The two couples entertained themselves by reading aloud from a volume of gothic tales. When Byron suggested a contest to write their own ghost stories, Mary wanted to find a story that would, as she later wrote in the into to her novel, “curdle the blood and quicken the beatings of the heart.” Eventually an idea came to her. “I saw—with shut eyes, but acute mental vision—I saw the pale student of unhallowed arts kneeling beside the thing he had put together,” she recalled. She left for England with Frankenstein in her head. Claire, on the other hand, returned pregnant with Byron’s child.

London of the 1820s was obsessed with this story. 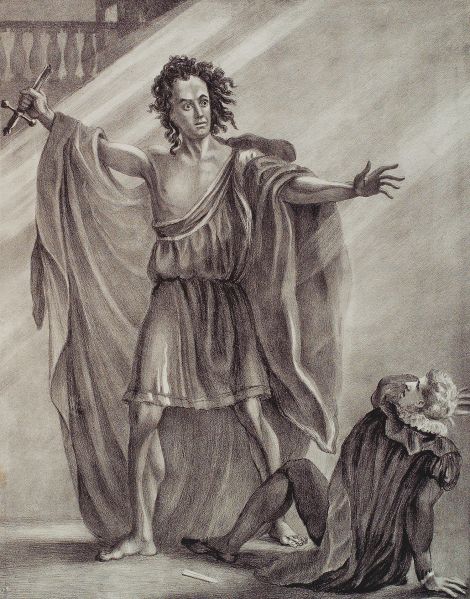 N. Whittock, Mr. T. P. Cooke, of the Theatre Royal Covent Garden, in the character of the monster in the dramatic romance of Frankenstein
between 1832 and 1834, Lithograph. The Carl H. Pforzheimer Collection of Shelley and His Circle, The New York Public Library, Astor, Lenox and Tilden Foundations

We’re most familiar with the story of Frankenstein through Mary Shelley’s 1818 novel and the classic 1931 film directed by James Whales, starring Boris Karloff. Yet it first really reached what was then considered a mass audience on the London stage in the 1820s, most notably in a production in which Thomas Potter Cooke, a star at the time, painted himself blue and played a mute monster in pantomime. His was one of at least 15 theater productions that played in London from 1823 to 1826.

Copyright laws in Britain then did not protect Mary Shelley’s work from anyone who wanted to stage it. Versions of Frankenstein also played in theaters in Paris. A women’s fan offered as a souvenir by a French theater in 1861—on view in the exhibition—is an early example of Frankenstein merchandise. 25,000 fans were given out over the run of the play.

Despite his iconic portrayal, Boris Karloff was not director James Whale’s first choice to play the monster in his 1931 film. 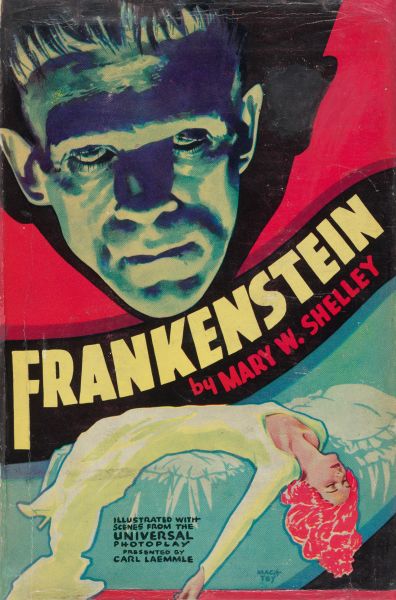 Karloff (born William Henry Pratt in England) established the template for the Frankenstein monster on the big screen and beyond. Even Herman Munster (played by Fred Gwynn) in the 1960s’ television satire The Munsters was a Karloff knock-off. But Lon Chaney Sr., legendary for his monster roles in the silent era, was Whales’ first choice to play Dr. Frankenstein’s ghastly creature. But Chaney died in 1930, leaving the job open, and Karloff got the role (and the look) that made him part of film history.

His daughter, Sara Karloff, had a jaundiced and much-repeated observation on her father’s belated emergence as a star: “Frankenstein was his 81st film, and hardly anyone had seen the first 80.” Boris Karloff would create the role of The Mummy a year later.

A 1960s “sequel” updated the story with a monster brought to life by radiation from the atomic bomb that was dropped on Hiroshima.

The 1931 Frankenstein movie launched endless sequels, but none wilder than the Japanese saga Frankenstein Conquers the World, 1965, starring the American actor Nick Adams, known for his role in the TV series The Rebel. 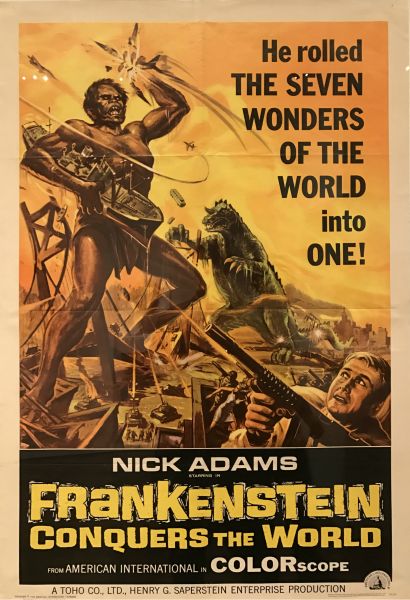 Things get started when the monster’s immortal heart (taken from a scientist’s lab in Germany) is passed from a Nazi U-boat to a Japanese submarine, which takes it to Hiroshima, the target for one of two U.S. atomic attacks that led to the Japanese surrender. The action jumps 15 years ahead, when a 20-foot humanoid creature is found roaming Hiroshima, preying on small animals. An American scientist (Nick Adams, dubbed into Japanese) takes a compassionate view of the humongous teenager as a victim of radiation, but the giant boy dies in a battle with a monster (modeled on Godzilla, another creature deformed by radiation) that rises from beneath the earth. The film opened in Japan on August 8, 1965, to mark the twentieth anniversary of the bombing of Hiroshima. It was released in the U.S. the following year, dubbed into English, with Adams speaking in his own voice. The film then had its own sequel, The War of the Gargantuas, 1966.

Frankenstein comics published during the Cold War led to a censorship campaign.

By the late 1940s and early 1950s, as the Frankenstein story found its way into comics, the Frankenstein monster, along with werewolves and vampires like Dracula, also soon found themselves in the spotlight of Cold War paranoia. It was argued that these characters could undermine the morals of youth or divert their attention from healthy topics—kids’ pastimes, it was thought, should ultimately contribute to the effort of building a resistance to Russian maneuvers to spy on or otherwise weaken America. 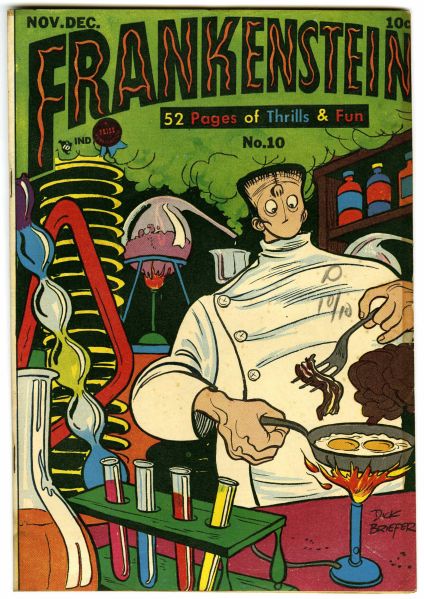 In 1954, the institution of the Comics Code forced publishers to tone down the grotesquery, brutality and criminality in their stories directed toward young comics readers. In 1934, three years after the first screen version of Frankenstein, the Production Code Administration established by the major film studios followed suit, requiring that all films submit to a Motion Picture Production Code for official approval. Extreme violence and overt sexual content would be suppressed for decades.

The 1994 Frankenstein movie had a creepily accurate model of Robert De Niro as the monster hanging around on set. 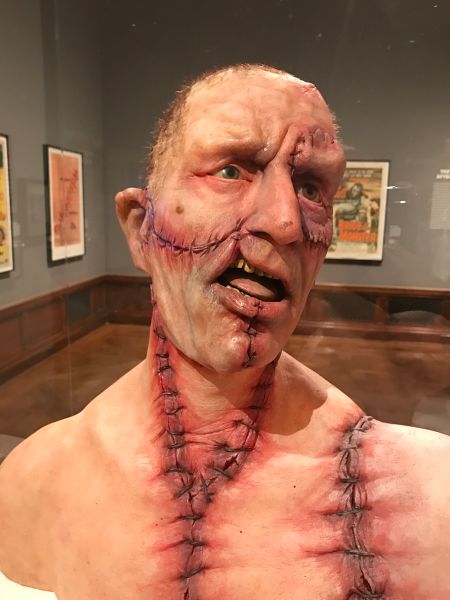 Torso model of Robert De Niro’s makeup for his role as the creature in Frankenstein, 1994. University of Texas at Austin

Makeup artists and sculptors stitched together a life-sized model of Robert De Niro’s head and torso when the actor played the lead in Kenneth Branagh’s 1994 Frankenstein. The actor played the role with a shaved head and crude stitches on his back and head to replicate the skin of a corpse assembled from body parts. “They made [the model] so they could consult it for continuity purposes,” said co-curator Denlinger, “It’s like an aide-memoire.”

Strikingly realistic, the grimacing model resembles the grotesquely tactile contemporary sculpture of Ron Mueck and Evan Penny. The figure on view at the Morgan comes from a donation of De Niro’s film memorabilia that the actor made to the University of Texas. In this case, “it’s alive” feels like more than a slogan. “It’s the scariest thing in the show. It brings home, more than anything else the whole idea of making a monster,” said Denlinger. 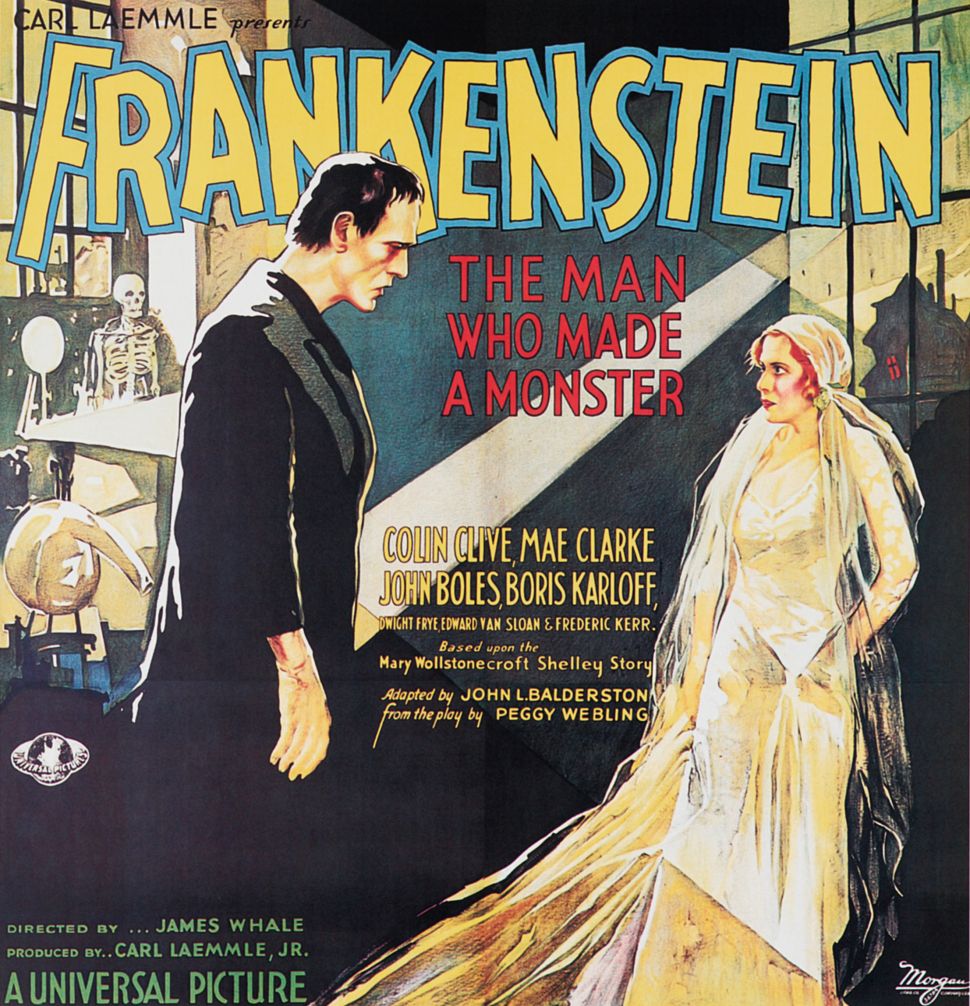