“My sitter still isn’t here,” my friend texted, six minutes before we were scheduled to meet at a museum event uptown. We’re both Manhattan moms and lawyers whose lives are planned to the minute, so any delay can tank a whole evening. Honestly though, I wasn’t annoyed. Time alone thrills me.

I sat down outside the museum, disproportionately overjoyed by a plastic cup of wine and 20 found minutes, and opened my Observer notebook. I needed to finish whatever column-in-progress was due in July, and since it was already late August, it was a particularly challenging task.

That’s when I found the last written words in my notebook: “Colum Ideas.” There was no “n,” and there were no ideas.

At first I thought it was a funny multitasking fail. Was that the day my baby tried to climb the wine rack?!

But as I looked at that blank space—void of ideas, opinions, independent thought of any kind—my own haggard reflection looked back. The page that said nothing said it all.

When I become a mother last fall, I vowed to make time for myself. I refused to live in a two-dimensional world where my only options were mother or lawyer, uptown or downtown, diaper bag or work bag. So, I kept my world big.

“I’m going to see Mean Girls with Beth!” I said, dressed in pink.

“I’m going to a work gala with my colleagues!” I said, dressed in black.

“We’re going to Aruba!” I said, dressed in a one-piece bathing suit.

The one-piece bathing suit aside, I actually felt proud—I thought I was having it all while raising a smart, happy kid to boot.

But the blank page was tangible evidence that I hadn’t really made time for myself. After giving 98 percent to my child and my job, I invested the crumbs that remained in my friends, network and husband. What experiences had been truly for me besides some very unsatisfying dental work? How many of the 7,368 hours since I gave birth had been utterly, selfishly, mine?

I was so busy being all things to all people, racing around Manhattan overbooked and under slept, I didn’t notice that the introspective, creative human I once was had started morphing into a machine. I was becoming a well-programmed mombot, doing it all with mindless efficiency on a five-hour charge per night. My job performance was solid; my parenting game was strong; my marriage was intact; my friendships were nurtured; but my pages—real and metaphorical—were blank.

Don’t let my occasional night out fool you; having a small child and demanding career means my time is no longer my own. I constantly make sacrifices to spend time with my boy, and still I miss him so much I cry in my office. So then I give up some more. I hide my un-pedicured toes. I live without my lapsed Equinox membership. I accept that the loose Oreo crumbling in my Kate Spade purse will live there for eternity. The time for such luxuries now belongs to my son.

But some things are too valuable to sacrifice, like the time and space for critical thought. Am I making the best choices for my child? Am I giving too much to my job? Is my marriage going to survive this? Am I going to survive this? I’ve asked myself none of these questions, and have therefore given no thought to the answers. If I don’t allow myself to process my experiences and reflect on life’s toughest problems, how will they get any better? And won’t it only get worse from here? Today I lack critical thought; tomorrow I’m incapable of conversation deeper than the respective benefits of the Diaper Genie versus the Diaper Champ.

And besides all that heavy analysis, don’t I need time to just think? And feel? And exist? Time to be neither a mother nor a lawyer nor a wife nor a friend, but just to be?

This is about more than a columnist without an idea, or a lack of thoughtful writing. It’s about a lack of thoughtful living. It’s about the mothers who do so much—too much—that we lose the emotional complexity that makes us human women instead of mindless mombots. Thoughtful living requires thought. Thought requires time. And that was perhaps the only thing not on my to-do list. Even if I “had it all”—which, let’s face it, was a delinquent column, a grueling job, a complicated marriage, an exhausting child and fizzling friendships—I had no meaningful thoughts about any of it.

What I needed more than two Jet Blue tickets to an island was a table for one at a coffee shop. What I wanted more than orchestra seats to a musical was a seat on an empty bench at the Central Park turtle pond. I longed to reclaim days, hours, even minutes for myself. Those of us who try to have it all and do it all often give it all as well. And besides the personal sacrifice, it’s not even good for our husbands or our kids. Marriages don’t thrive when one participant has less emotional depth than Siri, and children will learn more valuable lessons about life if their mother isn’t dead inside.

Perhaps I’m particularly attuned to this issue because, somewhere in my late mother’s basement, you might still find the blank canvases she never painted after she had children. You will definitely still find sterile, hospital-white walls in every room of her house, untouched by color or creativity of any kind. A former artist and art teacher, she let it all slip away, then literally surrounded herself with floor-to-ceiling blank canvases, probably oblivious to the symbolism. But not me. After that breakthrough with my full cup and empty lines—on my mother’s birthday outside an art museum!—I started making some changes. I refused to accept my blank page.

First, I boarded a train and left town, alone. Forty-four weekends had passed since my son was born; I decided to give the 45th to myself.

Next, with my dark eye circles gone and my battery recharged to a human level, I started a weekly to-do list: Go out to lunch alone, because I deserve a quiet, civilized meal once a week where I’m not dropping kale on my legal briefs. Take a spin through the park between day care drop-off and my first conference call, because although it feels like I never stop running, I rarely do so with my legs. Read The New York Times for a half hour at night instead of dropping it directly into the recycle bin, because I can benefit from those who have ideas and opinions even when I don’t. I’m discovering pockets of found time when I look for and reclaim them. And if you think it sounds silly to write this all down, then you clearly don’t understand the power of unchecked boxes on a type-A woman’s to-do list.

This morning, just one month after I stared down that blank page, I changed, fed and played with my baby, then handed him off to my visiting sister. “I’m going for a run!” I said, then ran away from my guilt and toward that turtle pond like my survival depended on it.

As I sat alone on a bench, I was drawn to some turtles sprawled out on the rocks. They looked so relaxed, so at peace—I almost felt jealous.

But did I really have a reason to envy those turtles? I too felt relaxed and at peace, while deprogramming in the sun and creating the mental space I need to survive this. Little by little, it’s working, and I have tangible evidence to prove it—my pages are no longer blank. And neither am I. 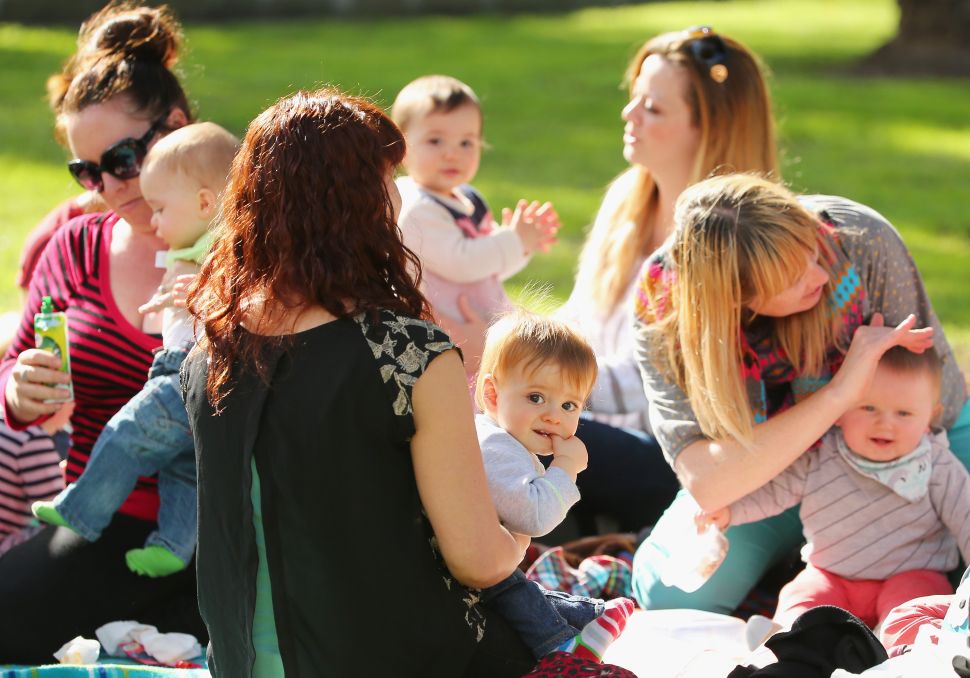