Princess Eugenie’s big day finally came, and it was a relatively drama-free affair. The biggest issue at her and Jack Brooksbank’s wedding appeared to be the aggressively windy weather, which meant guests were left to clutch their fascinators for dear life.

The couple’s ceremony took place at St. George’s Chapel, and the question of Princess Eugenie’s attire was finally answered: It was a custom gown by Peter Pilotto. She worked with Pilotto and Christopher De Vos on the design for months, and specifically requested the low back and lengthy train in order to show her scar from a surgery she had at 12 to correct her scoliosis—also, no veil.

The gown featured a corseted top, shoulder-showing long sleeves and a full skirt, with specific symbols that are meaningful to the Princess and Brooksbank. As Marie Claire‘s royal wedding expert pointed out, “The symbols are a Thistle for Scotland acknowledging the couple’s fondness for Balmoral, a Shamrock for Ireland as a nod to the Bride’s Ferguson family, the York Rose and ivy representing the couple’s home.”

It also seems that both Megan Markle and Kate Middleton were feeling sentimental and nostalgic for their own wedding days. Both the Duchess of Sussex and the Duchess of Cambridge chose dresses by the very same designers who created their wedding looks.

Markle selected a dress by British-born designer Clare Waight Keller for Givenchy for her big day. (We still think Markle’s dress could have used a good steaming and fitting, but yes, it was very pretty.)

She stuck with the same designer for Princess Eugenie’s ceremony (the erstwhile Suits actress frequently wears Keller’s creations), though she selected a navy blue Givenchy coat dress that bears a resemblance to Middleton’s choice for Markle’s wedding. Markle topped her look with a Noel Stewart headpiece and finished it off with Manolo Blahnik navy suede BB pumps.

Kate Middleton famously wore a long-sleeved, lace-covered gown designed by Sarah Burton for Alexander McQueen for her wedding to Prince William. Her nuptials took place at Westminster Abbey, because of that whole future King of England thing. This was just as the Kate Effect was blowing up, when Middleton’s fashion choices were being carefully followed and replicated to the point that her sartorial choices frequently sold out. Middleton has sported many Alexander McQueen ensembles since, including the light yellow coat dress she wore to Prince Harry and Markle’s wedding (it was her third time wearing the outfit).

She also chose Sarah Burton for Alexander McQueen for Princess Eugenie’s nuptials, though the look was surprisingly not neutral. Instead, Middleton opted for a fuchsia pink dress, paired with a matching Phillip Treacy fascinator and the same velvet heels she wore to the opening of the Photography Centre at the Victoria & Albert Museum earlier this week. Apparently, monochromatic frocks were the way to go.

While everyone’s attire was, for the most part, truly regal, we’re a little disappointed in the maid of honor, Princess Beatrice. It’s not that her royal blue Ralph & Russo dress wasn’t nice—we were just hoping for some serious headgear game. Instead, we got a…headband? Sure, it’s different, but there’s not a sea creature-y topper in sight.

At least Sarah Ferguson brought her A game. She donned a wide-brimmed green bonnet that reminded many of The Golden Snitch and Wonder Woman. Thank you, Fergie, for giving us this beauty. 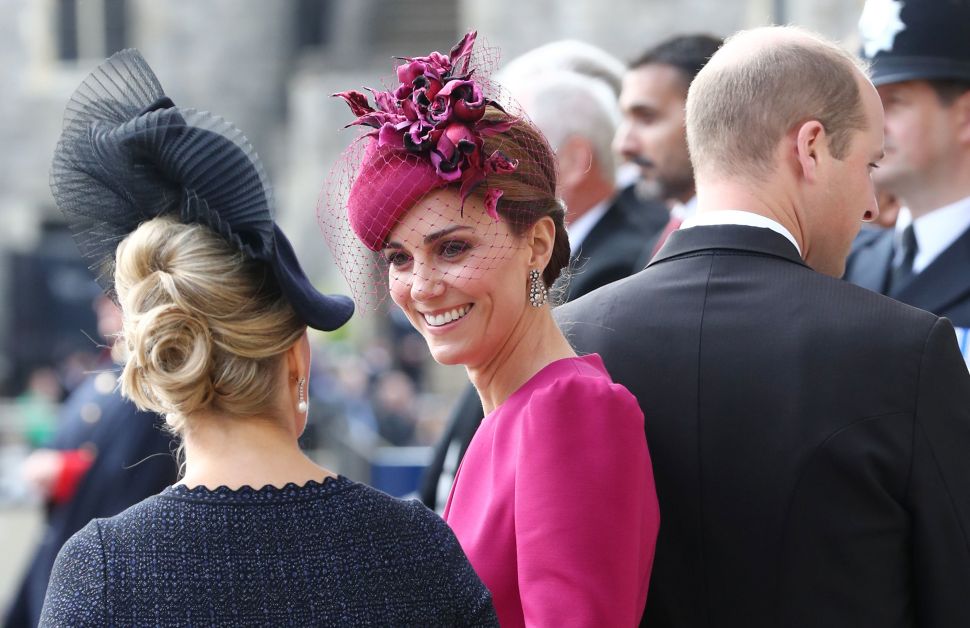