I don’t know if Can You Ever Forgive Me? irrevocably restores my faith in movies, but it certainly revives my belief in miracles. The miracle is Melissa McCarthy, whose tortured portrait of disgraced celebrity author and convicted forger Lee Israel is the consummate performance of her career and the crowning achievement of her life. I have seen Can You Ever Forgive Me? twice, rubbing my eyes with astonishment and discovering something new and wonderful each time. This is my favorite film of 2018.

The title could be the big question plaguing the star herself. Melissa McCarthy has made so many bad movies that her need to be taken seriously by fans and critics alike is understandable. So is the lavish praise she deserves for this one. She doesn’t waste a single moment in it.

I knew Lee Israel and both Ms. McCarthy’s stamp on the character and the revealing details uncovered about the woman in the tight, economical and colorful screenplay by Nicole Holofcener and Jeff Whitty is as accurate as DNA.  Without a lot of superfluous background details, the movie hits the ground running.

Once a distinguished and respected author of celebrity profiles who published well-received biographies of Tallulah Bankhead and Dorothy Kilgallen, she hit a blank wall. By 1991, she found herself so out of sync with the new wave of trashy tell-all bestsellers that her new book about Estée Lauder was a bomb and her cold, business-like agent (a great bitchy turn by Jane Curtin) wouldn’t even return her calls.

Facing a mid-life career crisis fueled by writer’s block and the kind of boredom that drove her to a pattern of professional suicide, Lee was a drunk, a lesbian without love, and a cat lover who lived in filth without so much as a litter box for the droppings that piled up under her bed. Lonely and deeply in debt, with no tolerance for people, all of her old bridges burned behind her and no other skills to make a living, she starts going to parties to steal everything from rolls of toilet paper in the guest bathrooms to winter coats in the check room. Suddenly a new light dawns. Swigging down scotch, she finds herself tracing the signature of Noël Coward at the library to pass the time.

Capitalizing on the public’s superficial obsession with fame, she extends her talent to composing witty letters on a variety of ancient typewriters, signing them Marlene Dietrich, Dorothy Parker, Fanny Brice and Fred Astaire, and selling them to book stores as literary artifacts to pay her bills. Business is so good that she takes on a “partner” named Jack Hock (a funny and masterful Richard E. Grant), an eccentric gay accomplice recently released from prison for armed robbery. This dubious pair hits pay dirt. Until, that is, there’s a knock on the door from the FBI.

It is impossible to either under-or-over-estimate the ability with which Melissa McCarthy establishes squatters’ rights on this film. She completely disappears into the character and personality of Lee Israel—age, stringy masculine hair, sardonic grimace, reading glasses and all—with a range I never dreamed possible.

Caustic, acerbic, resourceful and adroitly guided by director Marielle Heller (Diary of a Teenage Girl), the star eschews every temptation to insert her usual brand of sitcom humor to reveal varied aspects of a complex personality with intelligence and an astounding truthfulness. Here is a woman wounded by a lack of affection masquerading behind a calloused exterior. The crude language, the mischievous sneer at authority and discipline, the genuine grief when her beloved cat dies—it’s all here in a great piece of acting both meticulous and troubling.

The movie that surrounds her is pretty terrific, too. Crisply and gorgeously photographed to show New York the way it really looks in rain and snow, every detail is faultless, from the gay bars of Greenwich Village to the dusty feel of the secondhand bookshops and the lush source music of the day by Jeri Southern, Blossom Dearie, Chet Baker, Peggy Lee and others.

The Lee Israel I knew was bitter about the commercial failure of her book on Estée Lauder and frustrated by the work on her next project, a planned biography of jazz singer Chris Connor, which she abandoned midway. She was tough, funny, smart and unprincipled, but I found her fascinating—until she started trying to borrow money. I had no idea she had secretly embarked on a new criminal career of treachery and deceit, filching the letters of literary icons from libraries and archives, forging duplicates, and selling them to collectors for huge profits. Convicted of multiple felonies but ironically sentenced to five years of probation and community service at, of all places, the New York Public Library, she had one last success when she bravely turned her larcenous experiences into the tell-all memoir Can You Ever Forgive Me?, which provided the source material for this remarkable film.

Lee Israel died in 2014 at age 75, but I’m willing to bet she would have genuflected at the feet of Melissa McCarthy for her ability to demonstrate her tension, anguish and shabby lifestyle with so much disturbing three-dimensional feeling and ambience. You can safely call Can You Ever Forgive Me? the kind of rare, real-deal masterpiece that comes along once in a blue moon—and mean it. 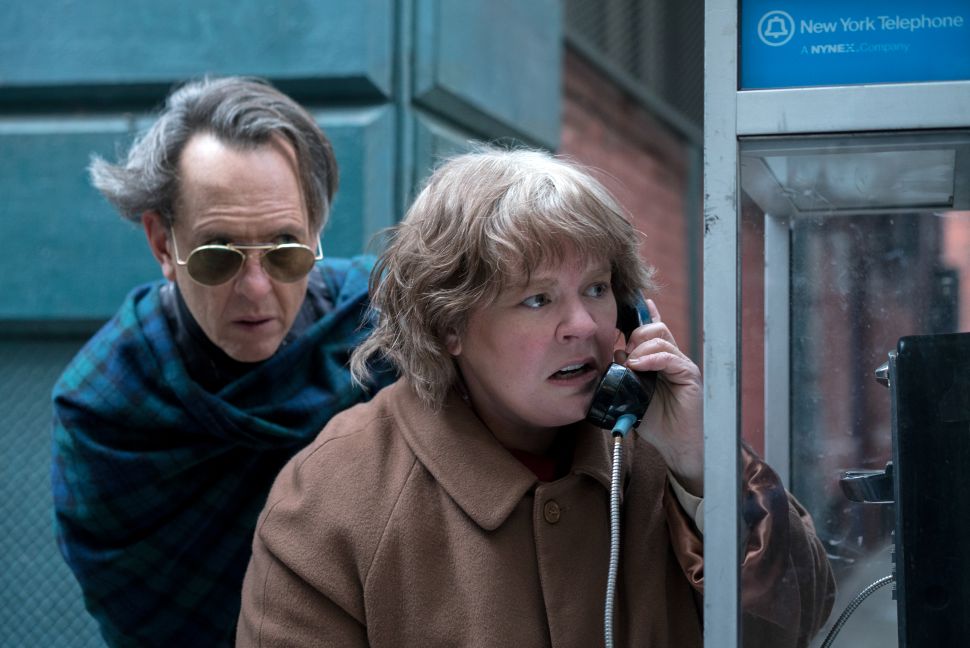