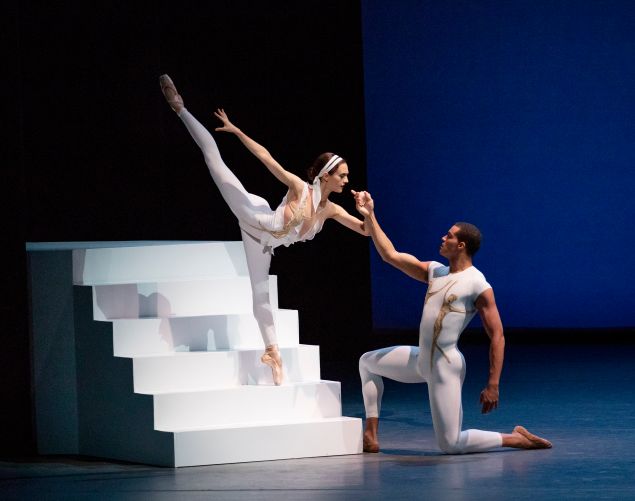 The other night we had the annual “Choreography & Couture” event at City Ballet—yes, another gala celebrating the relationship between those two phenomena and (I hope) making a pile of money for the company. What other excuse could there be? Because, let’s face it, it’s very rare that choreography and couture do each other favors, and for a simple reason: couture is there to be looked at, whereas costumes are there to help us look at the dancers.

There were three new ballets on the program, and first of all, let me thank all concerned for presenting them one after another—boom, boom, boom—with no intermissions between them, only very short pauses. No, things were not arranged this way as a favor to tired old critics but rather as a way of getting rich patrons upstairs to their dinner as quickly as possible. Nonetheless, we are grateful.

First came The Exchange by Matthew Noonan, an experienced dance-maker whose work has always seemed to me capable and polished but cautious, and The Exchange was no exception. Noonan deployed many of the company’s finest talents—Maria Kowroski and Tiler Peck among them—but the individual dancers barely registered due to the dominating heavy red skirts (by Gareth Pugh) that the women were wearing, all the better to whirl and twirl in. Perhaps if Mark Stanley’s lighting hadn’t been so hostilely dark I would have seen more in this piece than I was able to see. What is Mark Stanley’s problem? The music was charming, though—waltzes and bits of string quartets by Dvorak. As far as I could tell, Noonan’s ballet was carefully organized and fluent…and superfluous. Maybe if I understood what the title meant—what “Exchange”? and between whom?—but I was struggling too hard to penetrate the physical gloom to think clearly. 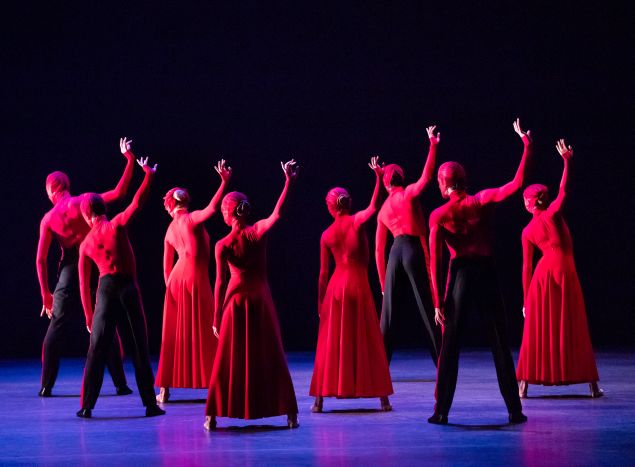 Next up was Judah, by the very young woman, Gianna Reisen, who excited just about everybody last year with her first piece for the company, Composer’s Holiday, which I found “inventive, sparky, confident—and witty.” Its music was a surprisingly dancey piece by Lukas Foss, and Reisen knew what to do with it. For this new work, she’s chosen a piece by John Adams called Judah—hence the title. It didn’t arrive with the excitement we feel when a first-time choreographer makes a real impression, but it certainly didn’t detract from the interest Reisen generated first time round. It was light, crisp, expertly constructed, with a lead couple in blazing white unitards (Lauren Lovette and Preston Chamblee), three women in a lovely shade of salmon/coral, and in a lovely light blue, Harrison Ball, who more and more seems to me a young man who might one day anchor the male contingent. He has a splendid look and strong technique—I just hope he gets over flinging his head back and looking soulfully up to the skies.

There were also a dozen dancers, mostly women, in a kind of olive/gold/pea-green color that was less than lovely. (The designer was Alberta Ferretti, who actually understands what costumes are for.) On both sides of the stage there were white stairs leading up to a platform that Reisen used effectively. Lovette and Chamblee danced cleanly and sharply—beautiful lifts, among other things. All in all, this seemed like a successful holding operation: not another breakthrough, but—hey!—Reisen is only nineteen. 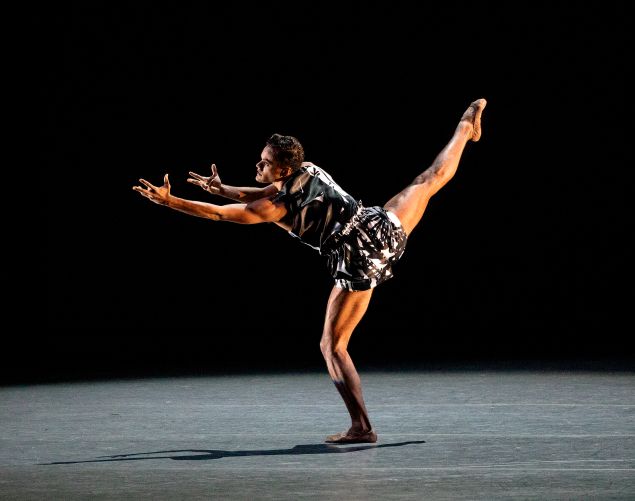 Taylor Stanley in The Runaway.

Finally, the Big One—City Ballet rapping! Kyle Abraham, who’s had every conceivable award for his modern dance efforts, has slummed up to ballet, if such a thing is possible. The music is a mix of trendy Nico Muhly piano and the art of Jay-Z, James Blake and Kanye West (who, I gather, is changing his name to Ye). To him we owe such lines, repeated over and over, as “I love myself way more than I love you.” Once was enough, Ye. The costumes (by Giles Deacon) were black and white, and in a number of cases successfully kept us from identifying the dancers—not only were their bodies distorted (deformed?) by the shapes of what they wore, but elaborate head pieces hid faces. The audience (and some of the critics) were in raptures—at last City Ballet has joined the crowd and forgotten its roots!—but I say to Kyle Abraham, “I love City Ballet way more than I love you.” This ballet should have been called The Runway rather than The Runaway.

But. Everything is forgiven in light of the very long and utterly absorbing solo—to Muhly’s piano music—that Abraham has made for Taylor Stanley, who has been emerging these past few years as the deepest male artist on the roster. Not only does he pull off the most extraordinary balances I can remember seeing anywhere, ever, but his intensity and integrity never flag. I would actually undergo this piece again for the sake of watching him. 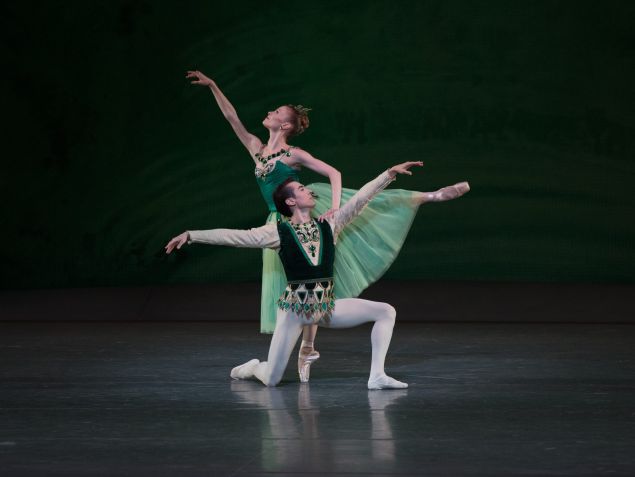 For the audience, clearly, the most important part of the evening was its start. With the entire company on the stage, Teresa Reichlin read aloud a stirring declaration of principle written by herself and Adrian Danchig-Waring but expressing the ideas and ideals of all those gathered behind her. In essence, it was—in the context of the dreadful recent scandals that have rocked the company and the dance world—a testament to the moral and ethical foundations on which many of us believe ballet is built. We learned this from George Balanchine and Lincoln Kirstein, and Reichlin invoked them movingly. In the absence of an artistic director and, given the non-appearance of a board of directors that seems rudderless, it was the dancers who spoke out.

And they have spoken out in other important ways. These first weeks of the fall season they have danced with what appears to be a unanimity of purpose and determination. There have been times through the years when the company has looked demoralized, but not now, with the chips down. If City Ballet survives—and of course it will—its survival will come from the dancers who save it through their passionate commitment. Yes, there have been problems: the loss of four male principles (including the estimable Joaquin De Luz, who is retiring, scandal-free) inevitably led to improvised casting that hasn’t always worked. But help is on the way. In fact, it’s already here, with Harrison Ball, Joseph Gordon, Preston Chamblee, Anthony Huxley, Russell Janzen, Roman Mejia and others evolving into first-level dancers.

There have been occasional misadventures, so let’s get them out of the way fast. Andrew Veyette was appalling in “Rubies.” The partnership of Sara Mearns with Joseph Gordon in “Diamonds” was technically successful—he’s an excellent partner—but ludicrous to look at: he is the definition of boyish and she is far from girlish. They reminded me of a nice kid escorting his favorite aunt to a show. Claire Kretzschmar, a terrific dancer, looks just right as the second “Rubies” girl—big, brassy, sympathetic, having fun—but she hasn’t mastered the signature deep, deep penchée arabesques that the role demands. And then there was the insanely long intermission before La Sylphide. Could someone have died backstage? No—it was only dopey programming. 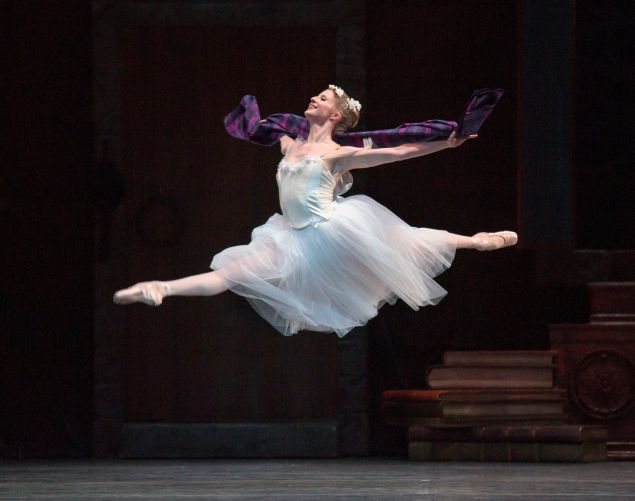 Here’s what we got in exchange. Taylor Stanley in The Runaway, to begin with. A ravishing Tiler Peck in Christopher Wheeldon’s Carousel (A Dance). Sterling Hyltin perfect in La Sylphide. A Sunday matinee cast of “Emeralds” clearly designed to reward somewhat neglected senior dancers and in which Lauren King, far too long kept waiting in the wings, gave a radiant performance of the great Violette Verdy role, which did Fauré, Verdy and Balanchine proud. I was, for once, in the blissful heaven that is “Emeralds.” And let’s not forget the pleasure of observing Maria Kowroski in her beautiful maturity. And the gratification of watching the corps rise to just about every occasion. We’re all breathlessly waiting for City Ballet’s next act, but meanwhile we can celebrate the current achievements of our beloved company. 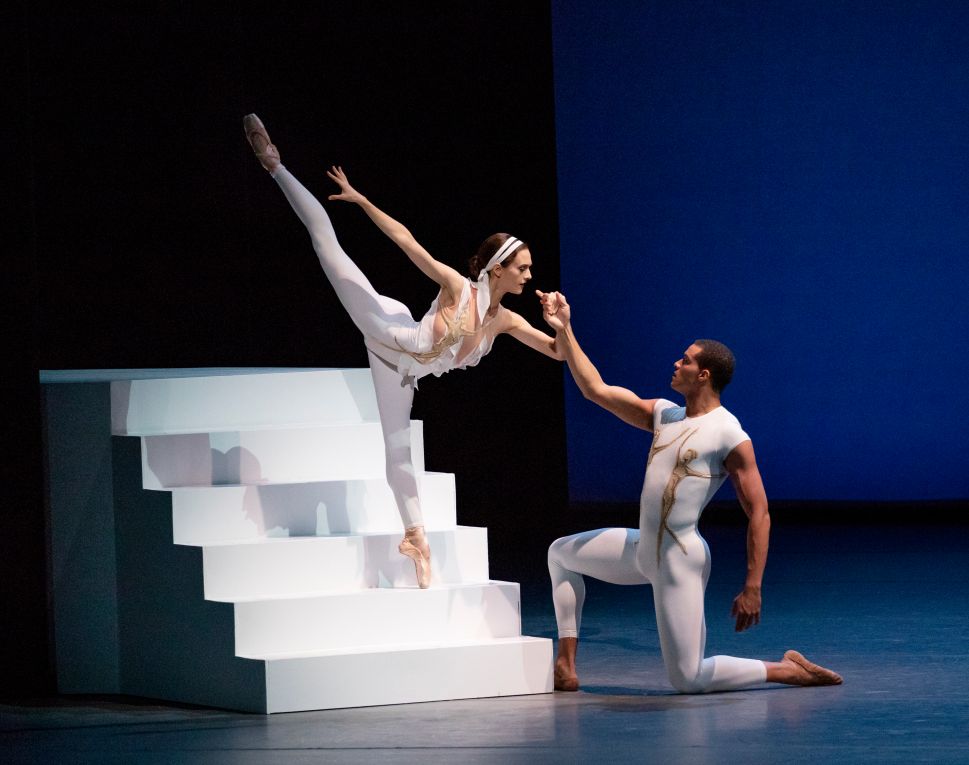