Written and directed by Theresa Rebeck, best known as creator of the TV series Fame, and set in the bucolic splendor of Vermont, with an impressive cast of heavyweights that includes Anjelica Huston, Bill Pullman, David Morse, Julia Stiles and Brian d’Arcy James, one has a right to expect much more from the film Trouble than this benign little bore ever delivers. Billed as a comedy, it’s never funny. Taken as a rural western drama about sibling rivalry, it does not take place in the West and the drama never involves. The game cast is chock full of talent, but nothing percolates.

The feuding siblings are Ben (Pullman) and his widowed sister Maggie (Huston). Years ago, he gave up his interest in their father’s New England farm and sold his shares to Maggie, who has lived there ever since. Now he shows up with a bulldozer, falsely claiming the land was stolen, and wants it back. Ben will stop at nothing to get the property and build an ugly modern house on it, and Maggie will stop at nothing to stop the brother she never liked in the first place.

The endless talk is occasionally muted by flashbacks to the pair as children. It doesn’t help to see how the farm meant more to them then than it does now. The movie drags on.

Ben wins by coercing a ditzy friend (Julia Stiles) who works for the Bureau of Land Management (whatever that is) to falsify sales records. Maggie, incensed beyond mere rage, grabs a rifle and shoots her brother. This is a comedy? The actors toil admirably, but the characters are pure cardboard. Motivations are dubious. Laughs are lazy. Taken as a rural drama, it never reaches much of a dramatic crescendo.

As a writer, Rebeck is capable of occasional pungent dialogue, but there’s not much evidence here. As a director, she doesn’t have a clue about rhythm, thrust, or narrative focus—not to mention logic. David Morse is wasted as an old friend with a lifelong crush on Maggie, and Julia Stiles barely ratchets up a notch as the spaced out file clerk.

Movies that have no reason to exist seem to be opening on a weekly basis. On its way to home video, Trouble, I’m sorry to say, is one of them. 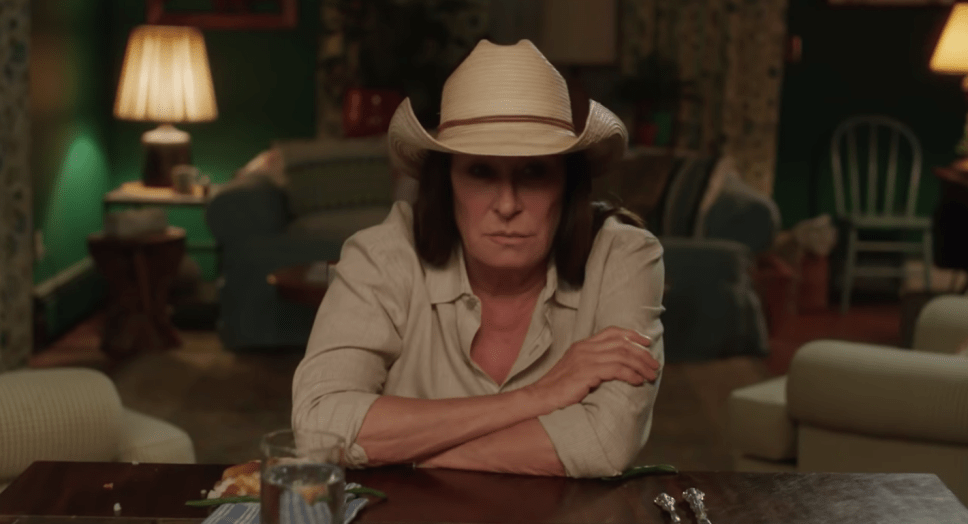