Last week was Bach week up and down the town—or least at the City Center and the Park Avenue Armory. It was also the first week of Fall for Dance, the ultra-popular dance-fest City Center presents annually, which opened its first of five programs with a new work by Jorma Elo, the resident dance-maker of the Boston Ballet. It was called Bach Cello Suites, and in contrast to Elo’s usual busy, busy, busy approach, it was in Good Taste—bland, empty, pointless. It may have been danced to Bach’s Cello Suites but it wasn’t Bach.

Next up, on the second program, was Pam Tanowitz’s New Work for Goldberg Variations (excerpt). Tanowitz has won all the awards, and it makes sense: with Merce Cunningham gone, his disciples are grateful even for watered-down Merce like hers. And here it was—willed, careful, worthy, and dull. However: at the piano, located smack in the middle of the stage, Simone Dinnerstein played the Goldbergs superbly. Following Balanchine’s dictum to close your eyes and listen to the music if you don’t like what you’re seeing, I did just that and was in Bach heaven.

And on the same program was Paul Taylor’s Promethean Fire, only weeks after his deeply mourned death. Bach plus Stokowski, and needless to say, deeply moving. More about these three works in my Fall for Dance round-up next time round.

The big event, up at the Armory, was Anne Teresa De Keersmaeker’s new The Six Brandenburg Concertos. I’m sorry that several of my colleagues didn’t appreciate it, but I found it a magnificent experience, grounded in the choreographer’s profound investigation into Bach’s glorious music. I’m not enough of a musicologist to be able to analyze her step-by-step translation of it into fascinating dance, but I know the real thing when I see it.

Each of the six concerti was introduced by a young man—always in new colors—calmly crossing to center stage, holding up a white placard announcing which concerto we were about to see, and strolling off in the opposite direction. There were sixteen dancers, twelve men and four women, from Rosas, De Keersmaeker’s company—plus, briefly, a scene-stealing small white dog. Nine of the twelve guys have neat beards or mustaches or both. (We’re in Europe.) Dancers and dog go unidentified in the program, though all of them deserved to be named. We are told that the group represents three generations of her dancers, information that no doubt means more to her than it can to us.

At the start, it’s all walking—the company, everyone in black, composedly walking to the front of the great white disc that provides the playing area, then back to the back. It’s all in unison—except when it isn’t. The movement ripples out, individual dancers are spotlighted, they group and regroup, some shoes and jackets are removed and carefully placed on the lip of the stage, the action builds. The concentration is total, yet relaxed.

Each concerto is different, yet they cohere. There are powerful solos, small groups, occasional duets, then passages where everybody is running full tilt around and around the stage—it’s a marathon which everybody wins. Most of all, it’s propulsive—like Bach. (In this regard, I was reminded again and again of Paul Taylor, but of course he’s very much on my mind these days.) Once you accustom yourself to De Keersmaeker’s vocabulary and pacing, these Brandenburgs are pure joy—but then I’ve always admired her work. Let’s hope we get to see this two-hour, intermissionless piece again someday—it’s perfectly suited to the Armory’s unconventional dimensions. Only the playing of the B’Rock Orchestra was less than thrilling.

Bach week would have been sublime if City Ballet had been performing the greatest of all Bach ballets, Concerto Barocco, and Taylor’s company had given us Esplanade. But you can’t have everything, we’re told, although I’ve never really understood why. 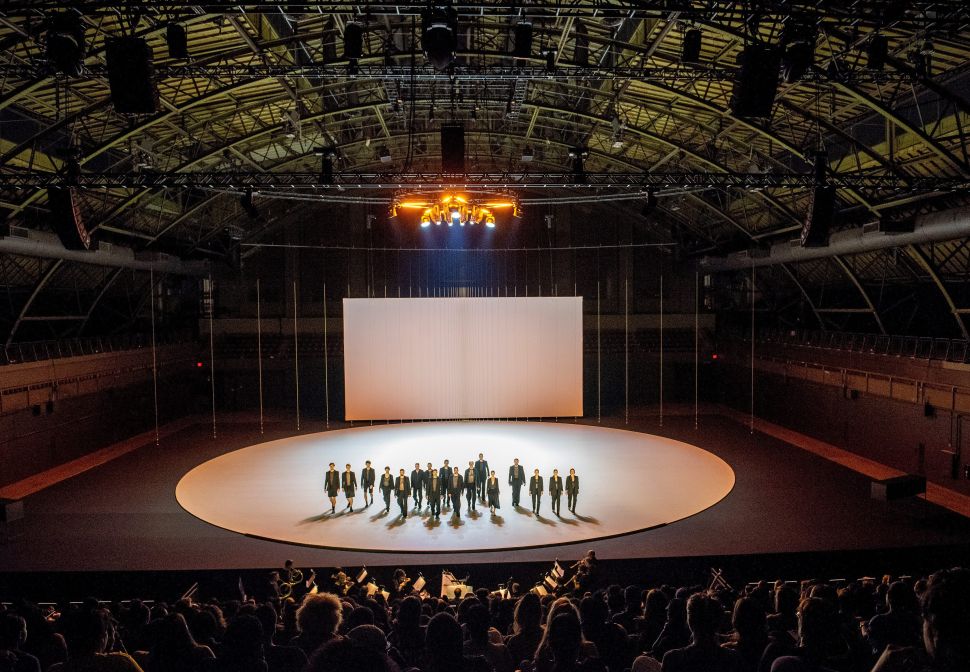