On Sunday night, two men in Cambridge, Mass. were arrested for the crime of skateboarding in a skate park after dark. Although, whether or not that’s actually a crime (or what the term “after dark” means in this case) is up for debate.

Videos of the incident, which were shared widely on social media among the skating community, show Derek Hanlon, a 27-year-old from Boston, being violently thrown to the ground by a Massachusetts State Police officer. A second man—24-year-old Askia Burns, also of Boston—was arrested while attempting to retrieve his belonging from the park after the group of skaters was instructed to leave.

“As the trooper attempted to place Hanlon into custody, the defendant continually resisted while approximately 30 other skaters began to move closer,” according to a statement from the police. “The trooper then took necessary action to overcome the defendant’s resistance and make the arrest quickly before the situation escalated further. Fortunately, neither the trooper, nor the defendant, nor any bystanders were injured by the defendant’s refusal to comply with the trooper’s directive.”

But a video taken of the arrest shared with Observer by witnesses shows Massachusetts State Trooper Ziad Kamel using excessive force in his attempt to detain Hanlon, who was speaking calmly with the officer before being tackled and assaulted.

In the video, Hanlon can be heard repeatedly asking what he is being arrested for and noting that he had donated money to have the lights installed in the park.

The incident seems to have stemmed from confusion over what the exact hours of the Lynch Family Skate Park were on that particular day. The police maintain that, like many of the other public parks in the state, it is open only until dusk. But the installation of lights in recent months, which were turned on for the first time last week, gave skaters the impression that the park would remain open until 9 p.m. going forward.

In fact, language on the website of the Charles River Conservancy (CRC), which had operated the park before turning it over to the Massachusetts Department of Conservation and Recreation (DCR), reads: “The park is open from dawn to 9:00 p.m. Lights were installed during the fall of 2018 to allow for park operation past dusk through a partnership between the City of Cambridge and DCR.”

A post from the CRC in August announced the installation of the lights saying that skaters would be able to stay after dark.

The lights at Lynch Family Skate Park are officially up and running, thanks to @CambMA and @MassDCR!! As the days get shorter this fall, skaters will get to skate into the evening. pic.twitter.com/BepaVL7gIX

Since the park was opened in 2015, it has been touted as a great success for the city which hoped it would serve as an attraction for locals and visitors alike. Pro skateboarders Tony Alva, Ray Barbee and Andy Macdonald are among the well-known names to have skated there since.

Local skaters have expressed frustration over the lack of clarity regarding the hours of the park once the lights were up and running, and wondered why the lights were turned on if they weren’t supposed to be taking advantage of them.

“People got excited and word spread. You guys, the lights are on!” Matt Richards, a local skater and witness to Hanlon’s arrest, said of the atmosphere around the park this past weekend. “Obviously, the lights are shining on at the park, they’re there for a reason. The lights were put in for the skate park.”

The arresting officer has been a frequent presence at the park, Richards said, often hassling skaters and threatening arrest. On Sunday, he arrived around 8:25 p.m. and began instructing the skaters to leave from the speaker in his car, according to Richards.

“He comes on his speaker and says everyone has five minutes to get your stuff together or you’re going to be arrested.” Richards explained. “People were like, ‘Why are we being threatened when the lights are on?'”

State officials were seen installing signs on Monday morning after the arrests indicating that the park would close at dark, although they’ve also said in a statement that the park will, in fact, stay open until 9 p.m. as soon as they get signs made saying as much.

It appears Hanlon was caught in a sort of closing time crossover limbo, the natural response to which, of course, is police violence and arrest.

State police installing a brand new sign at the park the day AFTER the arrest took place (10/1/2018). To the best of my knowledge, this skatepark is owned by the Charles River Conservancy @charlesrivercrc and operated by the Department of Conservation and Recreation @massdcr so what are the mass state police doing here? To me it seems like they are trying to cover their tracks and create a false narrative against Derek in their press release. On August 17, 2018, the DCR Tweeted "The lights at Lynch Family Skate Park are officially up and running, thanks to @CambMA and @MassDCR!! As the days get shorter this fall, skaters will get to skate into the evening." The lights were activated for the first time within the last week. Obviously the intent was to keep the park open until the scheduled light shut-off time at 9:00PM. If there were any signs that noted otherwise, clearly they were installed when the park was first built in 2015, and are no longer applicable. They should have been taken down when the lights were turned on for the first time, but I'm sure nobody could have predicted the outrageous incident that occured. If the officer had come to kick everyone out at 9:00, that would have been understandable, and there would be no issue. However, Kamel #814 showed up around 8:15, when the lights were still on and we all had every right to be at the park. Video by @youngchocolate

There was no sign present in the park indicating that it closed at dark on Sunday night, Richards and other skaters on social media have said.

“I know skateboarders have always had a bad rap or whatever, but Derek is an introvert,” Richards said. “He was in a situation where the officer approached him, and Derek was like ‘I work throughout the day, why are we being kicked out of a skate park?’ It’s not like anybody was being rude; it was like ‘Why can’t we have a conversation about this, then go home knowing a reason why?’ They arrested him for trespassing. Never told him he was under arrest for anything.”

Richards said the second man, Burns, was arrested for returning to retrieve a bottle after a group of police had arrived and instructed the skaters to disperse.

The two men were arraigned on Monday morning, facing charges of trespassing and resisting arrest in Hanlon’s case. Reached via direct message on Monday night, Hanlon said he had checked himself into a hospital for injuries sustained during the arrest to his arm and his neck after being choked and further assaulted by the officer in his police car. 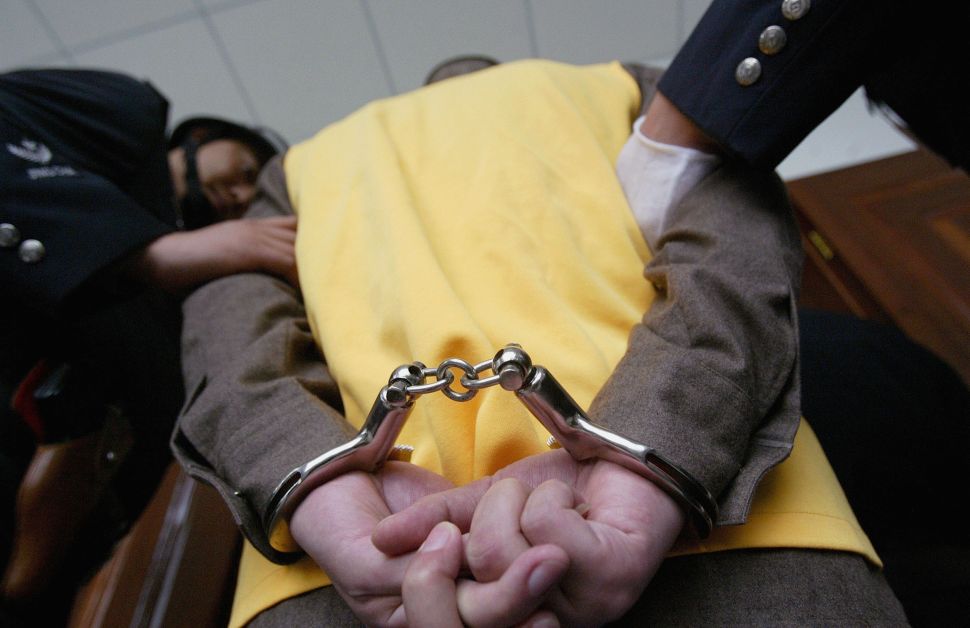