Neal—author, editor, satirist, curmudgeonly dad: I had a pass to the Austin City Limits Festival, weekend one. My experience could be summed up as: I skipped one day, and when I did go, I spent as much time as possible in the press tent because there was free pizza, couches, Topo Chico and nice air-conditioned bathrooms. I like live music, but usually in small settings with obscure costume-wearing bands playing dumb punk rock. Or 1960s-style soul music or maybe some rockabilly. The ACL Festival featured none of that, plus no comedy and no movies. Those are all part of South By Southwest, which I greatly prefer. Instead, I walked around the hot fields miserably, sucking on the tube of my CamelBak like a baby goat.

For my 15-year-old son, Elijah, who still has energy and enthusiasm for life, it was a very different experience. He partied his ass off, sober (I think). On Monday morning, he staggered out of his bedroom, groggy and sore. There was no school that day because of some stupid teacher in-service. He told me about his weekend. It sounded to me like hell on Earth, but he seemed happy.

Elijah—Neal’s 15-year-old son: I get there and I’m hanging out with my friends. I thought I’d drank a lot of that day, but I was very, very wrong. We were sitting on the ground but I was sweating profusely. I’m like, Oh God. I start drinking , and I’m feeling really bad. I stand up to walk away but I get light-headed and I feel like I’m going to fall down. I walk over somewhere and lie down in the shade for a bit. I don’t fall asleep but I’m really light-headed. So my friends bring the medic people over to me.

They seemed to think it was way worse than it actually was. They sent me to the main medical tent to have my vitals checked. They take me over there on a golf cart. I’m like, this is way too much, but whatever. They take my pulse like three times. And they had to prick my finger to check my blood sugar. I’m like, please don’t prick my finger, come on. But they did. And at some point I was really thirsty and I needed some . I got up to get some and four people yelled at me ‘You can’t stand up, sit down!’ I was like, ‘I’m fine, I just need some . The reason I’m in here is because I didn’t drink enough and you’re getting mad at me for getting more. What the hell?’ Everyone was really worried for me but I thought it was pretty funny.

Finally, my friend comes and gets me. But first they had to call mom so she could confirm that it was OK for me to keep going. So embarrassing.

Neal: My wife and I were at home when we got the text.

“Elijah says the medics are going to call us from ACL,” she said.

“He says he passed out.”

They called. He was fine. Apparently, he had a cut on his head. Either he’d hit it while laying down or someone had stepped on his head. The medic seemed to think he could keep going at ACL.

“Are you heading down there?” my wife asked.

“Maybe after we finish this episode of Chopped,” I said.

Elijah: Then my friends and I watched Paul McCartney. We just sat down and listened to it. He was amazing. He’s one of the most famous musicians of all time, right? I was talking with this one girl about it on Saturday, and she said, ‘what songs has he made?’ Nope, not even going to answer that. ‘Who’s Paul McCartney?’ people kept asking me. That is not an acceptable question. It was really good. Really, really good. Like surprisingly amazing.

Probably, I would have gone. But I was scheduled to teach a yoga class at 5:30. Nobody showed up, as usual. I wonder why, I’m such a cheery presence. After that, I had a choice to either get in my car and drive downtown or go home and watch the Dodger game. I chose the latter. So instead of getting there late and sitting by myself in the mud 40,000 people from the stage, I skipped day one entirely, and instead saw 175 Facebook posts about seeing Paul McCartney and judged everyone.

Elijah: On Saturday we were waiting for a show, there was this really tall guy who made me unable to see anything. I kept trying to move. He was wearing this big black thing over his head. He turned around at one point to talk to us. And was wearing a full bacon costume. Dressed as a giant piece of bacon. He was hanging out with another guy dressed as a giant pickle. I don’t know how they didn’t die of heat stroke. But I respect them a lot for wearing those costumes. I think that’s what everyone should do. It was so hilarious.

Neal: While Elijah did that, I glumly sat with some friends who got super stoned while watching The Wombats, a rock group from Liverpool who were perfectly fine but sounded like Oasis had gone through the copying machine from Multiplicity a few times. Then it was time for The Breeders, who filled the crowd with nostalgia but left me feeling dead inside, which is really just the inverse of nostalgia. What was wrong with me?

Nearly a year earlier, I’d gotten sober. While everyone around me horked joints and vape pens, I drank warm , trying not to die. I wandered away from The Breeders and saw a sign that read “Sober Tent.” Some people were sitting at a table, passing out literature. Apparently, there were now sober tents at ACL and Bonnaroo. A guy who used to be a DeadHead had started it for people who still wanted to go to music festivals without getting wasted.

It was 3:45. I found a friend. She and I talked about how our mothers had recently died. That was cheery. Then I went to a 12-Step meeting in the middle of the festival. About twenty of us passed around a yellow balloon—which functioned as a kind of talking stick—and confessed to our drug and alcohol and sex and whatever else addictions. It wasn’t exactly fun, but it’s always nice to know that there are other people out there as miserable as I am. While we were holding hands and saying The Serenity Prayer at the end of the meeting, I looked up and saw a guy in a pickle costume watching us. It was the only experience my son and I had in common that weekend.

Elijah: I went to see this group called San Holo. We get there and it’s under this tent. There were a ton of people. I had to take my shirt off because I was sweating so much. The music started and it was literally the craziest shit I’ve ever been in. People were falling down in groups. My friend’s sunglasses got completely crushed on his face. Everyone was just getting thrown around. There were crazy beat drops. I was really surprised at how crazy it was. With about 15 minutes left, I said, ‘I’m gonna die if I stay in here any longer.’ I didn’t have any bottles with me. It was the most exhausted I’ve ever been and it was amazing.

Neal: While Elijah was doing that, I met up with a friend. We went to see Metallica. She’d gotten a good spot right at the front of where the festival allowed people set up their chairs. I sat on the ground and drank some kind of gross strawberry mint while she sucked down two joints. The band started. All around me, people were wasted and getting into fights. Metallica is still loud and have a lot of energy for old millionaires. People around me rocked out hard. “These are my people!” my friend shouted. Not mine.

Elijah: On Sunday we were already exhausted. Travis Scott was playing that night. He’s literally my favorite artist, period. We got there five hours before he started. Girls were sitting down on the ground and people were pouring on them because they were sweating so much. No one had enough because we didn’t know how long we’d be standing there. At some point everyone was out of , and people were desperate.

Neal: The headliner Sunday was supposed to be Childish Gambino, who might have been interesting to see even though I would have spent the entire show being jealous about his career. Instead, replacing the injured Gambino, Travis Scott was the big name. I think his music is slow and boring and shallow. I stayed home. If I could have curled up under my desk, I would have done that. Better to leave the festivals to the young, who still believe that things are fun.

Elijah: Travis Scott finally gets up and after the first song, I lose all my friends. They get pushed back. I get pushed way to the front, and I’m like five behind the first row. Every time there was a big beat drop in a song, people would jump up and elbow one another. At one point, I was so squished between people, I couldn’t move my arms up. They were just down at my side. I was unable to move whatsoever. Every guy had his shirt off and was literally drenched in sweat. If you bumped up against someone, you felt like a seal slipping against them. It was like we were in a swimming pool full of sweat.

The entire concert was a mosh pit. It was insane. I was like ‘holy crap, how am I going to stay for the whole thing?’ And I did, somehow.

It was the most amazing time I’ve ever had in my life. 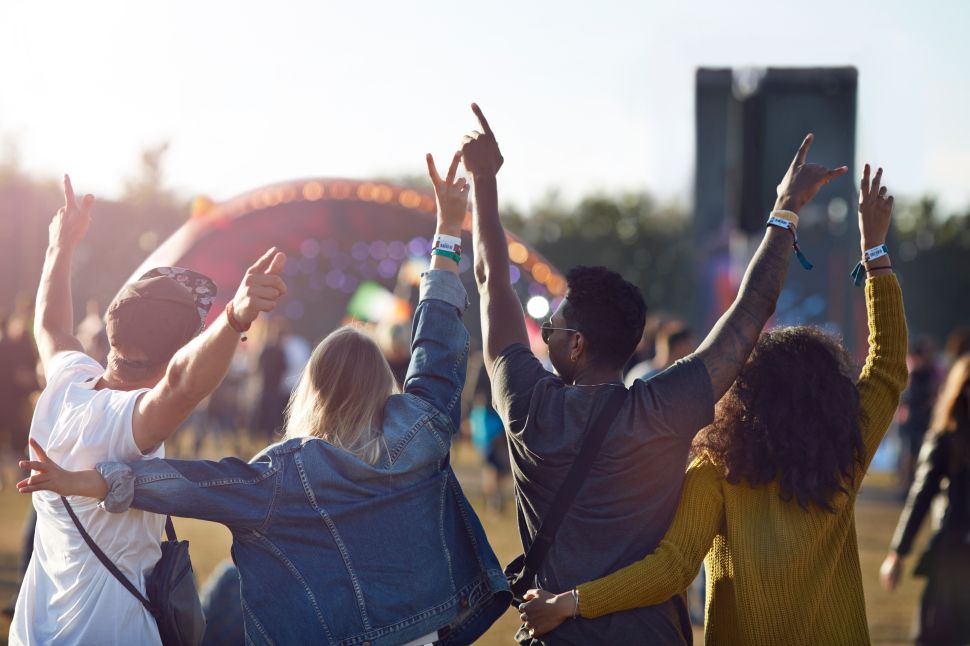