NBC’s family melodrama This Is Us isn’t so much an emotional roller coaster as it is an intergalactic wormhole-hopping quest of feelings. So cozy up and settle in for a good recap cry as we run through this week’s edition of the This Is Us Heartstrings Index, a comprehensive breakdown of which characters delivered the most gut-punching scenes.

“We Found Love in a Lonely Place”

Despite the fact that we know they end up together, nothing was more infuriating last week than seeing Jack (Milo Ventimiglia) drop by Rebecca’s (Mandy Moore) to return her jacket only to discover her canoodling with Blonde Mustache. It turns out Blonde Mustache was an old boyfriend who suddenly popped back up in Rebecca’s life to ask her to move to New York with him, because that’s not creepy at all. Though she was initially picking up what he was putting down, there was one thing holding her back: Jack.

So, in this week’s episode, “Katie Girls,” she did what any sensible rom-com lead would do: She hopped in her car and stalked him until she found him. (Sure, it’s cute when Rebecca does it, but when I do it, it’s “unlawful” and “in breach of the restraining order.”) Anyway, when that door swung open and Jack saw Rebecca standing there for him, our hearts exploded. Then, when they proved to be the only couple in history who could infuse dishwashing with that much freakin’ sexual tension, the aftershock of that explosion destroyed any emotional structures still standing in our hearts. And then, when Rebecca asked him to take a drive to Los Angeles and he immediately agreed, the radiation fallout from our heart explosions transformed our innards into an inhabitable wasteland.

Not all Heartstrings Index entries have to be sad! Jack and Rebecca are #RelationshipGoals personified.

Devastation Quotient: 5 out of 5

Inception: This Is Us Edition

A dream sequence, like leopard print, either works or it doesn’t. It’s a high-wire balancing act between ridiculous and enlightening, between fancy artsy-fartsy pretentiousness and a clever display of genuine emotional trauma. Last night’s dream sequence with Kate (Chrissy Metz)—in which she spent time in an ethereal plane with her teenage and child self plus Jack during her surgery—was a bit of both. On one hand [extremely Chandler Bing voice] can you BE anymore on the nose, This Is Us? On the other hand, we weren’t so much weeping during the scenes as shedding several pounds of weight via our tear ducts.

As Kate struggles to awaken from the anesthesia, we see her teenage self try to persuade her to stay with them, verbally accosting her for her desire to have a child. It’s a manifestation of all of Kate’s deepest fears, and given the flash-forward in the Season 3 premiere, we got really concerned at that moment about her staying under and possibly never regaining consciousness. But good news: Kate beat back her self-doubt and proudly told Ghost Jack she had to return to the land of the living.

“I know, Katie Girl,” Ghost Jack replies in a beautiful, soul-twisting coo. Kevin (Justin Hartley) was right: This dude really is a superhero.

Big ups to this week’s episode for delivering not one, but two happy Heartstrings Index entries.

Devastation Quotient: 4 out of 5 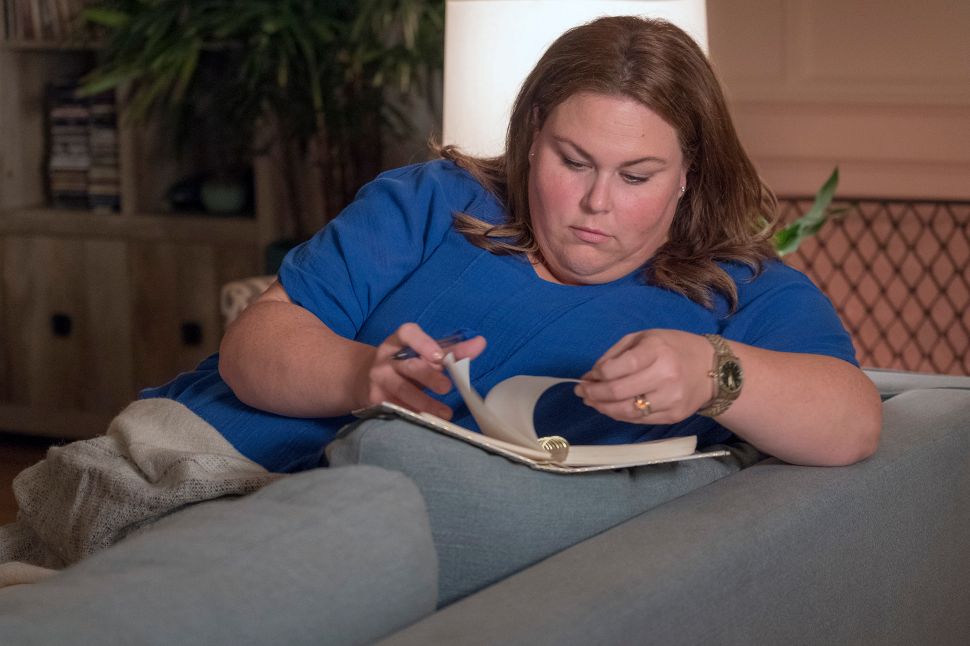