In a characteristically scatterbrained Sunday night interview with Lesley Stahl of 60 Minutes, President Trump gave the cameras a tour of the White House, which is when many viewers noticed a bizarre painting hanging on a wall there: a portrait of Trump seated at a table in a bar (or restaurant?) having drinks with none other than George H. W. Bush, Ronald Reagan, Dwight D. Eisenhower, Gerald R. Ford, Theodore Roosevelt, Calvin Coolidge (hovering in the background, looking cross), Richard Nixon, Abraham Lincoln, and George W. Bush. It’s called The Republican Club, and it’s hella weird.

Baffled? No worries. We’re here to break it all down.

Where exactly is this painting?

“My best guess after a few minutes of studying the West Wing floor plan would be that it’s hanging either in room off of the President’s secretary’s office, or in the secretary’s office itself,” wrote Jack Crosbie Sunday night for Splinter News. “If anyone knows for sure, let me know in the comments.” However, ArtNet reported Monday morning that it’s hanging in the presidential dining room.

It’s definitely…conceptual. But Trump evidently felt quite comfortable showing it off while talking to Stahl about climate change (“I don’t think it’s a hoax, I think there’s probably a difference. But I don’t know that it’s manmade”), whether he’ll shut down the Mueller investigation (“I don’t pledge anything. But I will tell you, I have no intention of doing that”) and his relationship with Kim Jong-un (“I have a good energy with him. I have a good chemistry with him. Look at the horrible threats that were made. No more threats.”).

The figures themselves are painted realistically. You’re supposed to take Lincoln and Nixon beaming at each other at face value, we guess. It’s sort of like C.M. Coolidge’s Dogs Playing Poker—absurdist realism.

Abraham Lincoln pounding drinks with Dick Nixon? Who in their right mind thought this was a good idea?

Andy Thomas did, apparently. The Missouri-based painter is an established professional artist who primarily makes oil paintings depicting classic Americana. According to his website’s “About” page, “In the past, Andy has painted many subjects from American History, a picnic by the river, kids playing sports to a brutal bear fight.”

Totally. Almost as terrifying as Trump’s wicked grin in this painting.

Right?! How did the artist create such a believable rendering of Trump? Did Trump pose for this?

No, and Thomas told Time that painting Trump in a flattering light posed a significant challenge. “Trump has that one thing where he sticks his chin up and smiles really big, and it’s great for a caricature but not necessarily flattering to him,” he said. “I had to find a photo where it looked like he’s actually heard something funny, so it looks like a genuine smile.”

Why is Trump drinking a Coke? Everyone else seems to have alcohol.

Trump’s iced soft drink is almost certainly a nod to his well-documented habit of drinking as many as 12 Diet Cokes per day.

So how did Trump get his hands on the painting?

Republican Rep. Darrell Issa of California had recently told Thomas that he’d be showing his work to Trump—so presumably, The Republican Club was a gift from Issa. Two weeks ago, Trump called Thomas to congratulate him on the quality of the painting and to ask Thomas if he thought he was doing a good job as president and what Thomas’ friends and family thought about him. Also, how did Thomas think the race between Senator Claire McCaskill and Republican challenger Josh Hawley would pan out?

Way to put a dude on the spot. What did he say?

Thomas said, “I’m thinking, ‘I’m a damn artist, what is he asking me about this for?'”

Makes sense. So, is the artist a Trump supporter? Seems like he’s really into him.

Well, we know this: Thomas was “ecstatic” to discover that The Donald was a fan of his work. “A lot of times gifts aren’t really hung up, they’re just pushed in a closet somewhere,” he told Time. “To find out it’s actually hanging is really a treat.” But Thomas isn’t exactly a right-wing zealot: He also has a painting for sale in the exact same format of the Trump painting, which features Democratic presidents instead.

OK, fine. So who’s that shadowy lady standing in the background?

The one who appears eager to join in with the laughing, powerful men? Thomas has an explanation for her, too.

Not quite. “That will be the first Republican female president and the first Democratic female president,” Thomas said, referring to the woman who appears in both versions. “As I was doing the painting, I was thinking that these guys are kind of intimidating in a way. That’s the kind of woman that will be our first woman president; she’ll walk right up to that table.” Wow. Inspiring stuff!

Any other intriguing White House paintings we should know about?

We’ll keep you posted. But you may recall that Trump was denied fine art from the Guggenheim and instead offered a gold toilet. 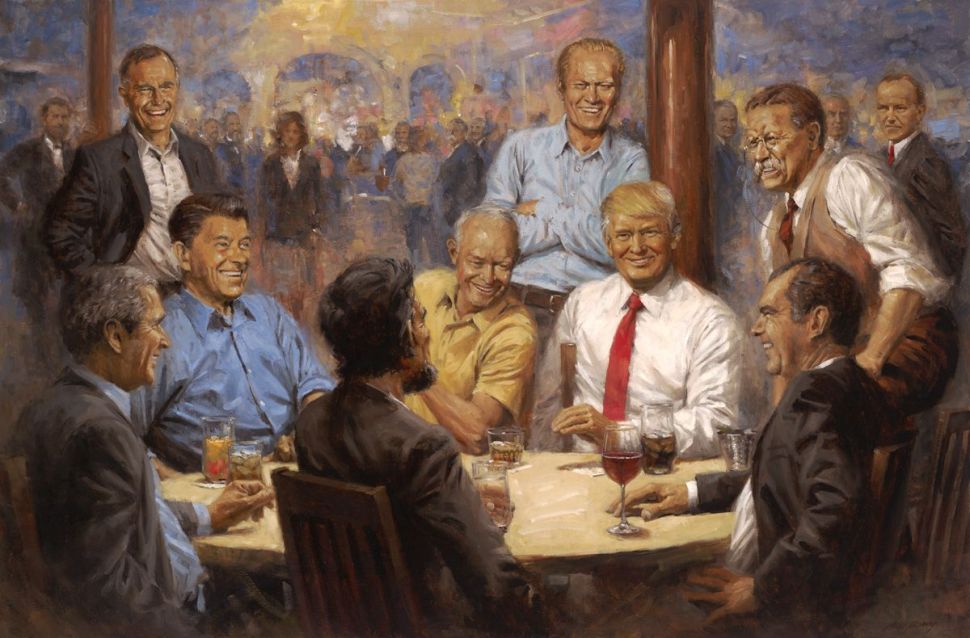