This week, he addressed an audience of business leaders at Fortune’s Most Powerful Women Summit in Laguna Niguel, California. By no definition is Khosrowshahi a “powerful woman,“ but to make him look more qualified for the event, the ride-hailing chief brought along his mother, Lili Khosrowshahi.

It was Lili Khosrowshahi’s first known media appearance in the U.S. She and Dara participated in an on-stage conversation with Fortune editor Pattie Sellers about their family’s dramatic story of immigrating from Iran to the U.S. in the 1970s.

Dara Khosrowshahi (learn how to pronounce his last name here) was born into a wealthy, prominent Muslim family in Iran in 1969 and was originally expected to inherit his family’s consumer product business. But in 1979, the family fled the country during the Iranian Revolution and left everything behind. They stayed in France for a brief period of time before settling down in America.

“We had very limited money,” Lili Khosrowshahi recalled of the family’s early days in the U.S. “I’d never worked before. I started working full-time, and every penny we earned was put in Dara [and two other son’s] education… and it was expensive. I remember at the time coffee was $0.15 [a cup], and I wouldn’t buy a cup of coffee for myself.”

“I buy her a cup of coffee nowadays,” Dara joked.

Thanks to his mother’s selfless support of his education, Dara Khosrowshahi got a degree from Brown University, started his career as an investment banker on Wall Street in the 1990s and later moved into the internet industry. Before joining Uber, he was CEO of travel booking site Expedia for 13 years.

Speaking of Uber, Dara Khosrowshahi’s main message at the event was that Uber is considering giving drivers health insurance and other benefits. Currently, Uber drivers are considered “partners,” or independent contractors in payroll terms, and don’t have the same benefits as full-time employees.

“For the first time, I think we are now listening to our drivers, and we are building out our services in concert with them,” he said. “If you’re going to call your drivers ‘partners,’ then treat them like partners, so that you don’t get this world where independent contractors are the ‘have-nots’ and full-time employees are the ‘haves.'”

Uber recently started providing healthcare insurance to drivers in the European Union, partly pressured by the region’s labor laws. Khosrowshahi is now considering extending the practice to all markets. “We have a long way to go, but at least in Europe we’ve gotten one step closer,” he said.

When Uber appointed Khosrowshahi as CEO a year ago, the company had high hopes for him to repair its squandered reputation left behind by founder Travis Kalanick.

No doubt he has taken the job seriously. Last month, he gave a recap of his first year at Uber at the TechCrunch Disrupt conference in San Francisco, along with his new chief diversity officer, Bo Young Lee; last week, he appeared at Bloomberg’s Global Business Forum in New York with Ford CEO James Hackett and Lyft president John Zimmer to announce an environmental collaboration with Bloomberg to help reduce carbon emissions in cities. A day later, he was back in San Francisco to speak about drivers’ benefits at Salesforce’s annual Dreamforce conference. 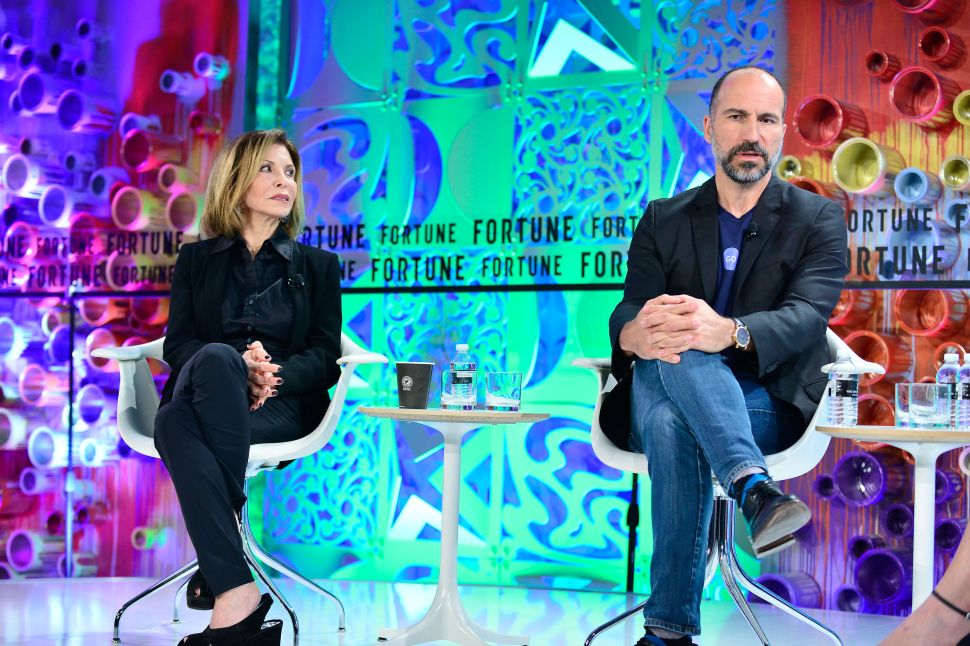