It has to be said that being “cash-poor”—meaning you’ve got a lot of assets, but very little wealth in spendable form—is, despite its negative connotations, a position of incredible privilege. Most often you’ll hear about it in relation to celebrities as the reason for a house flip or sale of a beloved Lamborghini. But surprising as it may seem, gallery owners, art collectors and even artists mind find themselves in that position as well. These are Jordan Tabach-Bank’s sort of people: “The kid’s tuition needs to be paid, the property tax is due, there is a divorce settlement…You don’t have the money, but you have that Picasso.”

Tabach-Bank is chief executive officer of The Loan Companies, which has offices in Beverly Hills, California, Chicago and right on 47th Street in Manhattan’s Diamond District. Along with jewelry and watches he specializes in giving quick cash for high-value works of art. Bring in that Picasso, walk out with a check.

Tabach-Bank is by no means the only pawnbroker—yep, even in the luxury world it’s still called pawnbroking—who lends cash against high-value artwork and, in fact, the past 20 years have seen a growing number of pawn shops around the country going upscale to capture a market that might best be described as the One Percent.

There are approximately 10,000 independent pawnbrokers in the United States, up 40 percent since 2007, according to the National Pawnbrokers Association, which has 1,700 members. A spokesperson for the association said that the majority of pawnbrokers are “mom and pop companies” whose loans tend to be in the $50-150 range. But Pawn shops that accept more high-end items as collateral have risen in number over the past decade, which may be attributable to the recession of the same time period. While artwork is not the largest area of luxury item used as collateral, it certainly represents a significant slice.

Leveraging tangible property for quick cash takes place for a wide variety of reasons, and pawnbrokers have heard all the reasons. “I usually don’t ask borrowers why they need the money, but they tell me anyway,” Tabach-Bank said. “Sometimes, I feel like a bartender.” On occasion, art dealers need money to pay the rent or make payroll; other times, individual artists with stories about needing to pay a foundry or who are short of cash between exhibitions, come in looking for a loan.

Dewey Burke, chief executive officer of the Denver-based Luxury Asset Capital, a high-end pawn shop that operates completely online, confirms that the relationship between broker and the broke is an odd one. “Clients volunteer personal information to us. We don’t ask.” But a lot of times it’s the same story: “divorce, tuition, vacations, vacation homes, maybe buy something else. Someone has a Ferrari but he sees another one for sale that he wants and has to get the money together quickly to buy it.” You know, the stuff we all go through.

The speed of obtaining a loan—for whatever reason—is the overriding factor in why owners of valuables go the high-end pawn shop route rather than applying for a loan from a bank. And not intending to part with an item in a definite way is why the cash-poor don’t go to auction. Pawn shops, high- and low-end, also don’t require credit checks, and there is no penalty for borrowers who prove unable to repay their loans: They simply lose the collateral to the pawnbroker.

Banks still may seem a more attractive source of borrowing for owners of art and other expensive objects. Interest rates are considerably lower at banks—usually between four and five percent per year, as opposed to between two and four percent per month (24-48 percent annually) at California and New York pawn shops—and private banking departments usually allow borrowers to maintain possession of their valuables, while pawn shops require the physical removal of items from the home or office of the person receiving the loan. Tabach-Bank claimed that a recent loan against a Christopher Wool painting involved moving the artwork from the borrower’s bin at a fine art storage facility to his company’s own bin at the same facility. One small step for art, one giant leap for high finance.

The term of a bank loan collateralized by art usually is longer than that of a pawn shop—between six and 24 months for the former, between one and four months for the latter—and if the money you need is in the range of millions, that’s more the purview of a bank. Pawnbrokers will rarely go that high. “I did loan up to $1 million once,” Burke said.

The loan-to-value percentage (how much cash you get in hand compared to the value of the asset) is often the same at banks and the high-end pawn shops, ranging from 30 to 70 percent. Yossi Dina, owner of The Dina Collection, a pawn shop in Beverly Hills, said that the amount he will loan to a prospective borrower depends upon “how much I can sell it for immediately, if the person defaults.” Checking auction sales records, he makes a quick determination on how strong an artist’s market is and how sought-after a particular artwork tends to be. In the contemporary field, “we look for artists with strong representation—a Gagosian or David Zwirner, for instance—and secondary market records,” said Tabach-Bank, adding that he will be more generous to a borrower with an artwork that never has been bought in at an auction. “I can move a Warhol Marilyn Monroe or Elizabeth Taylor, but I might not has as much luck with a Warhol Electric Chair,” he said.

The biggest risk in dealing in art for a pawnbroker? Fakes. Though the valuation process might be a bit less rigorous than at an auction house, the authentication process is not. The collector needs to provide proof of purchase, a certificate of authenticity and a history of the artwork’s ownership (known as provenance) from the time it left the artist’s studio to the present. “I can tell 80 percent of the time if a work is a fake,” Dina said, adding that he also relies on “a guy who knows a lot” about art and does some quick research. “I won’t take any Russian art. There are a lot of fakes there.” If Dina’s word is to be trusted, that guy must be good, as Dina claimed to have only lent money on fakes a few times over the years.

Sal Menjivar, manager of the San Francisco-based Buy Sell Loan that has six Bay Area locations, stated that his pawn shop has “never lent money against a fake” but added that “we’re pawnbrokers, not curators” and does little more research than checking online auction records. Because of this, the company only will lend up to 30 percent of the presumed value of the collateral.

With Luxury Asset Capital, which acquired the Internet pawnbroker Pawngo.com last year and operates completely online, collectors also need to submit photographs of the artworks on which they hope to borrow money. The receipt, provenance and photographs are sent to the Winston Art Group, an art advisory company with seven locations around the U.S., which will make a quick evaluation of the art object and send someone to the prospective borrower’s address to examine the piece in person. That process takes a few days, and the cost of its assessment, typically $2,500, is an additional fee that the borrower would pay to Luxury Asset Capital. If the loan is approved, the artwork is removed from the borrower’s home or office to a nearby fine art storage facility.

Burke noted that the company has “lost money on fake watches twice in our seven-year history” but never on works of art. The default rate at Luxury Asset Capital through all categories of objects is 1.5 percent, far lower than the 20-25 percent national average at local pawn shops that do not specialize in high-end items. “People don’t want to lose objects—a Ferrari, a Rolex, a Warhol—and they pay the loans and interest,” adding that 74 percent of the company’s business consists of repeat clients. “They borrow against something they own to buy something else, then repay the loan, and they come back to borrow again against that same object to buy something else, then repay that loan.”

When a loan is not repaid, then the collateral is put up for sale, sometimes at auction, sometimes through a dealer and sometimes at the pawnbrokers’ own place of business. On the walls of The Dina Collection are works by Marc Chagall, Salvador Dali, Amedeo Modigliani, Pablo Picasso, Ed Ruscha and Andy Warhol. “I sold more art last year than most galleries,” Dina boasted. 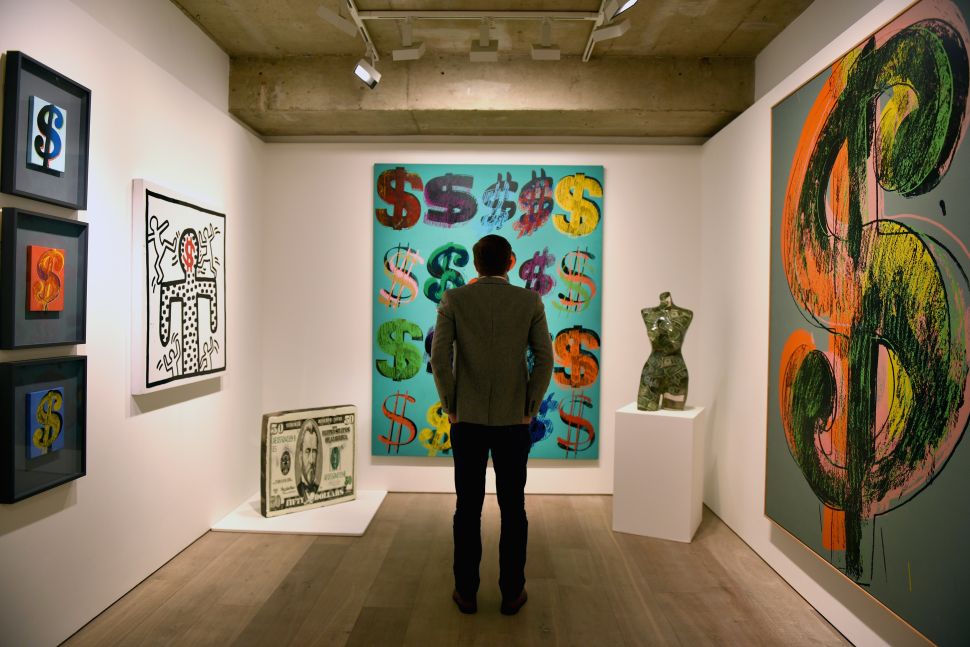