What does a female scientist have to do to get her own Wikipedia page? Literally win the Nobel Prize.

Dr. Donna Strickland, an associate professor at the University of Waterloo in Canada, won the Nobel Prize in Physics this week for her research on laser amplification. She shared the prize with her doctoral adviser Gérard Mourou. Strickland is only the third female Nobel laureate in physics, and the only living one (the others were Marie Curie and Marie Goeppert-Mayer).

The Royal Swedish Academy of Sciences said Strickland’s work had “revolutionized laser physics.” It also revolutionized her Wikipedia profile—previously she only had a passing mention in Mourou’s entry.

Strickland’s online encyclopedia page went live about 90 minutes after her win was announced. It included her complete biography, personal life and career accomplishments.

The page is fairly exhaustive given the speed with which it was seemingly created. That’s likely because some in the Wikipedia community have been actively trying to get Strickland on the site for months.

User Campbpt0 created a page for Strickland in May, which detailed all of her accolades and accomplishments to that point (it’s an impressive list even before the Nobel).

But an editor named Bradv declined the submission, saying its references didn’t show that Strickland qualified for a Wikipedia entry.

Well, that changed quickly on Tuesday. And now that Strickland is a Nobel laureate with a Wikipedia page, fans on social media said she should apply to become a full professor.

Today marks the first day in my lifetime that there's been a living recipient of the Nobel Prize in physics who is a woman-Donna Strickland. Although, her university hasn't promoted her to full professor and she didn't have a Wikipedia page until ~2 hours ago.

"I don't know, Donna, the APT committee here can be pretty picky about promotion to Full." pic.twitter.com/13qjI563SL

But others pointed out that Strickland’s internal issues with tenure and online issues with Wikipedia showed the continuing bias against women in science.

For those commenting on Nobel Laureate Donna Strickland not being full professor: on the BBC this morning, she said she’d never applied. It’s worth noting women tend to wait longer to go up for promotion because of internal and external biases.

Only 18 percent of Wikipedia biographies are about women. But to its credit, the site has is trying to combat this problem. Wikipedia’s “Women in Red” project is working to turn red links (which denote non-working pages) for women on the site into blue ones. Some editors are writing one to three Wikipedia entries for women in science every day. 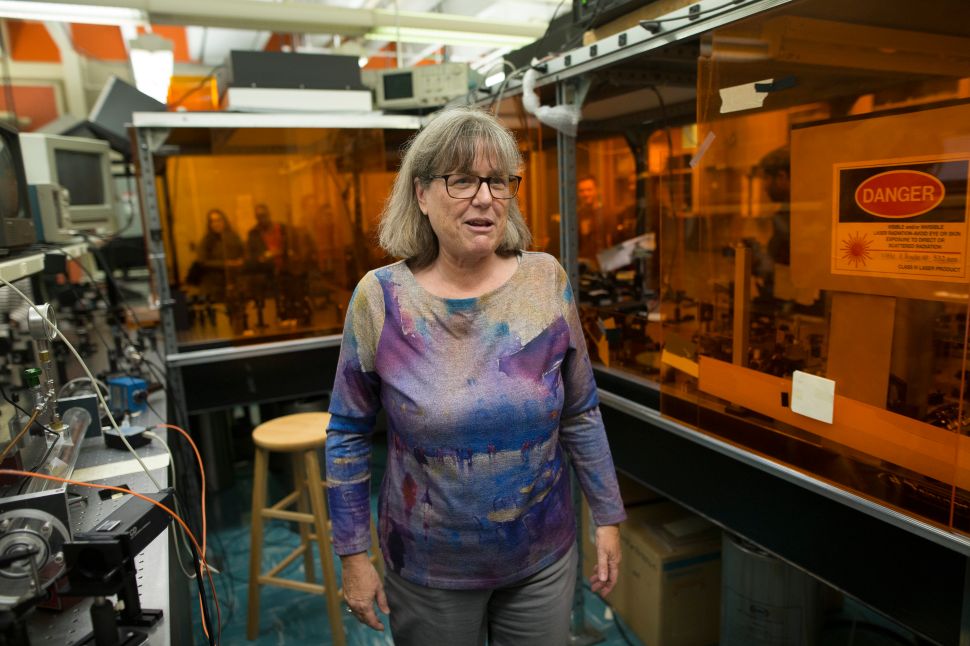