This month, contour queen Kim Kardashian and Kanye West headed to Uganda so that the MAGA hat–loving rapper could finish recording his upcoming Yandhi album in Africa. The couple made a few questionable decisions during the trip, but their choice of accommodations wasn’t one of them. The reality star and the Yeezy designer (along with their daughter, North) stayed at the Chobe Safari Lodge—by which we mean they rented out all 62 of its rooms.

The five-star retreat opened in the 1950s, but was destroyed and subsequently shut down in the following years amid political and military turmoil. Luckily, it was renovated and reopened in 2010. Located in the eastern part of the resplendent Murchison Falls National Park, it sits right on the banks of the Nile River.

Chobe’s accommodations include 30 standard rooms, eight luxury tents, seven deluxe tents and six “super deluxe tents,” the last of which are air-conditioned and boast en suite bathrooms, private balconies, separate seating areas and minibars. It’s sort of like the difference between the fancy and very fancy RVs at Burning Man, except instead of glitter-covered, feather boa–wearing ravers, guests will find rooms so close to the Nile, they’ll be able to hear the hippos at night.

Those looking for an extra-luxe experience can check into the two-bedroom Presidential Cottage, which comes with an oversize living room, a balcony, several terraces, a 24-7 private butler and a private lagoon frequented by buffalo and more hippos. It’s safe to assume this is where the Kardashian-West family unpacked; while the lodge wouldn’t confirm the cost to rent out the entire hotel, rates for the Presidential Cottage alone start at $962 a night.

The lodge has a three-tier swimming pool and an indoor-outdoor restaurant, but you’ll actually have to leave Chobe to sample its finest perks. They include a boat safari on the Nile and a guided nature walk where you’ll spot giraffes, elephants, and other animals frolicking about. It’s a true Instagram dream that Kardashian was sure to capture in one of her Stories.

Guests can also take a trip to Murchison Falls, which is about an hour away from the lodge. A drive along along the falls offers views of elephants, buffaloes and giraffes, and more adventurous travelers can hike to the top. But the best way to guarantee you get a solid peek at wildlife is to book a safari drive, where a special ranger will serve as your guide. Kimye went a step further, as Kimye does, and headed to Trackers Safari Lodge in southwestern Uganda for a gorilla trekking excursion.

The good news: Kardashian and West no longer have free rein over this little slice of paradise. They’ve come and gone, and even the three silver “domes” that the rapper installed for recording purposes at the lodge have been dismantled. His Twitter videos, however, will live on forever—or at least until he deletes his account again. 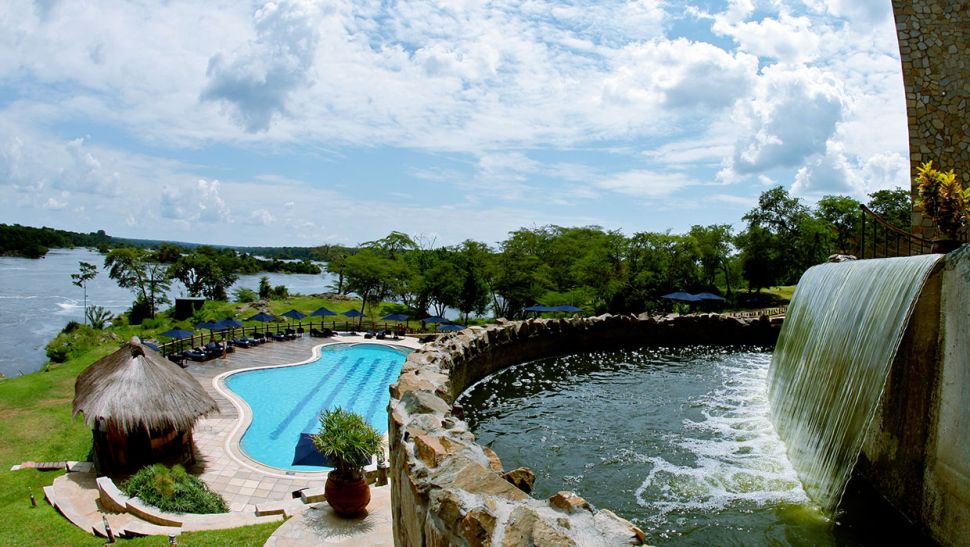