The opening scene of the new film Wobble Palace consists of the chronological history of a couple’s relationship told via text messages. We scroll all the way back to the beginning, where Eugene (Eugene Kotlyarenko) and Jane (Dasha Nekrasova) met while casting their votes in the 2012 election.

Four years pass. Love notes sour into squabbles over dishes, and romance eventually curdles into a mutual vehement dislike that leads the two to create a pact: They will split the time they spend in the home they share. Eugene will have the place to himself on Saturday, and Jane will take over on Sunday. This is all set up seamlessly with a sturdy plot structure, which is reinforced by the madcap specificity of the outrageous house in question (which boasts AstroTurf instead of a carpet).

Once Eugene is alone, he immediately begins to seek out casual hookups. His pathetic, desperate attempts at intimacy are only made worse by his truly repellant hairstyle, precariously perched on the crown of his bald patch. As Teo Bugbee wrote in The New York Times, “The coif is magnificent, an exposed ego of an updo that communicates all the shoestring pretensions of the world Eugene and Jane occupy together.”

Eugene (whose job is unclear or maybe nonexistent) is comically hamstrung by his own loneliness. His slapstick hijinks and borderline-misogynistic emotional barbarism are often funny, but the movie truly kicks into gear when Jane (an artist) gets the run of the house and assumes the role of narrator. Nekrasova and Kotlyarenko co-wrote the movie, and at a recent post-screening Q&A hosted by writer Kaitlin Phillips at New York’s Metrograph, they said they made Jane’s thoughts explicit via voiceover as a way to better endear the audience to her character.

The result could be called Woman on the Verge of a Nervous Breakup. We watch Jane, disgusted with her whirling dervish of a boyfriend, attempt to seduce a skater boy, trade platitudes with an art-world star and fuck an inconsiderate Trump supporter. All the while her stream of consciousness bubbles forth, revealing her concerns about her living arrangement and whether people think she’s “basic.”

Some of the best scenes in Wobble Palace are in Russian, the language the couple speaks when they’re alone together (or in front of a harried Uber driver). The connection that brought Jane and Eugene together is explicitly written as political—they flirted by bashing Romney, and Jane’s thoughts frequently turn to Bernie Sanders if he’d won the presidential election—but the characters aren’t radicals or activists. When Jane dons a (very cool) track jacket with “Russia” splashed across the back, it isn’t to communicate solidarity with her country of origin. She’s just trying to stay warm while she smokes a solitary cigarette outside.

At one point, Eugene wakes up from a nightmare in which he and Jane run gleefully into a polling place while wearing camouflage and Make America Great Again hats. It then becomes clear that the primal fear shared by Jane and Eugene, who are both witty and painfully anxious, is a fear of poorly communicating who they are—paradoxically, this need to be honest is the very thing that kept them (unhappily) together for such a long time.

A partnership between artists (or two artistic types) can often function as a series of escalating dares. Each person wants to test the other’s limits in the service of making (or just saying) something interesting. Jane and Eugene’s relationship used to be unpredictable and fun; voting was a form of foreplay. Now, in the quagmire of Trump’s America, everything is fractured and confusing, including, at times, the search for lasting love.

Wobble Palace is currently playing in limited theaters and will be available on Amazon Prime October 23. 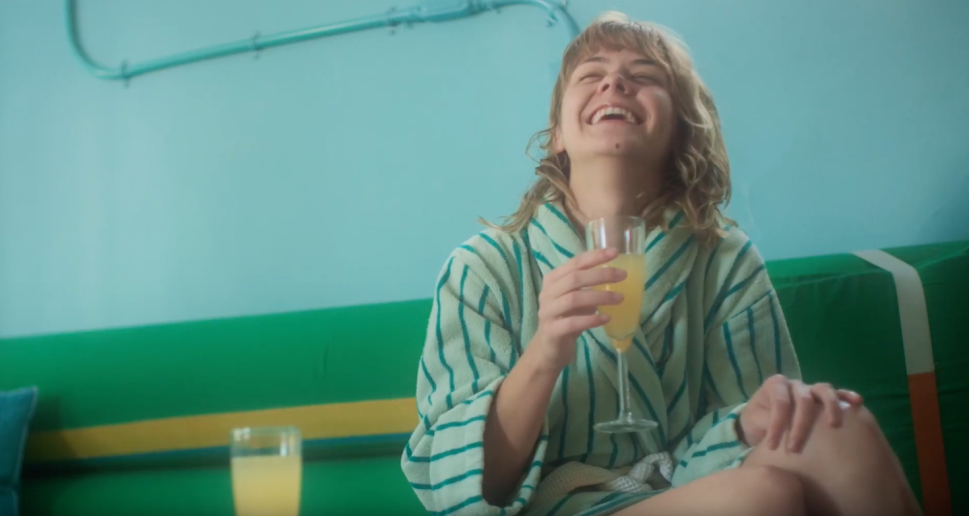