At a crucial time when journalists find themselves critically berated and unjustly attacked for no other reason than political ignorance, the timing is perfect for A Private War, a movie about the great war correspondent Marie Colvin, who dedicated her life to telling the truth about the consequences of the atrocities of war on innocent people everywhere, and the ultimate price she paid to do it. Because it concentrates on her professional risks and accomplishments at the expense of the personal conflicts that give the film its title, it’s not a perfect film, but Rosamund Pike is so good in it that she’s certain to be remembered when the 2018 awards season rolls around.

Directed by Matthew Heineman and based on a powerful piece of well-researched reportage in Vanity Fair by Marie Brenner, a first-rate journalist herself, A Private War chronicles the final ten years in the life of a brave, impassioned and self-sacrificing American working as a correspondent for The Sunday Times in London, from the attack that blinded her in Sri Lanka to the disastrous efforts to send a dispatch from the front lines in Homs, Syria that resulted in her death in 2012. Beautiful, patrician British cabbage rose Rosamund Pike plays the tough, rebellious writer from Oyster Bay, Long Island to the point of camouflage to present the raw mask of a woman ravaged by life on the front lines—chain smoking, scotch swigging, bluntly outspoken, gravelly voiced with a trademark black patch over one eye after it was blasted out of its socket by a hand grenade, tormented by nightmares and flashbacks to scenes of violence and death that haunted her to the last paragraph of her broken laptop—a woman who felt more at home in all the danger zones on the angry planet than in any of the fashionable restaurants in Mayfair.

She was a compassionate, stubborn and ethical reporter with an admirable sense of duty, but the glimpses into her personal life and her relationships with her cameraman Paul Conroy (Jamie Dornan, doing his best to rise above his reputation as a naked pretty boy in the Fifty Shades of Grey trilogy), her British editor Sean Ryan (Tom Hollander) and her lover, businessman Tony Shaw (Stanley Tucci), are stunted and sketchy. The men have little to do, and there are times in the movie when the character of Marie comes off like a driven, suicidal robot. Even her acceptance speech as Foreign Correspondent of the Year in 2001 is deleted for fear of making her sound too human. Instead, the viewer is whisked off to the Iraqi border, plunged into the desert trenches of Afghanistan and Libya, and saddened by the empty vodka bottles under her bed that attest to her growing Post Traumatic Stress Disorder affliction. She is shown suggesting to an ex-husband that they try again to have a child. “We tried that already,” he wiltingly retorts. But why did they fail? How could she watch slaughtered and starving children with a sober expression or stand up to a world dictator like her tense face-to-face with Syrian monster Colonel Gaddafi, yet drink and smoke until her teeth fall out to hide her inner feelings of failure as a woman?

A Private War is a movie of such idealism and purpose that it is well worth seeing, but personally, I would have preferred one less battle sequence (filmed in Jordan) of Marie Colvin dodging bullets and opted for one more revealing scene of Marie Colvin the human being torn between the fear of growing old and the dread of dying young. Still, this is a movie worth seeing—a noble effort to polish the image of a superior journalist hell-bent on bringing the truth to the world. 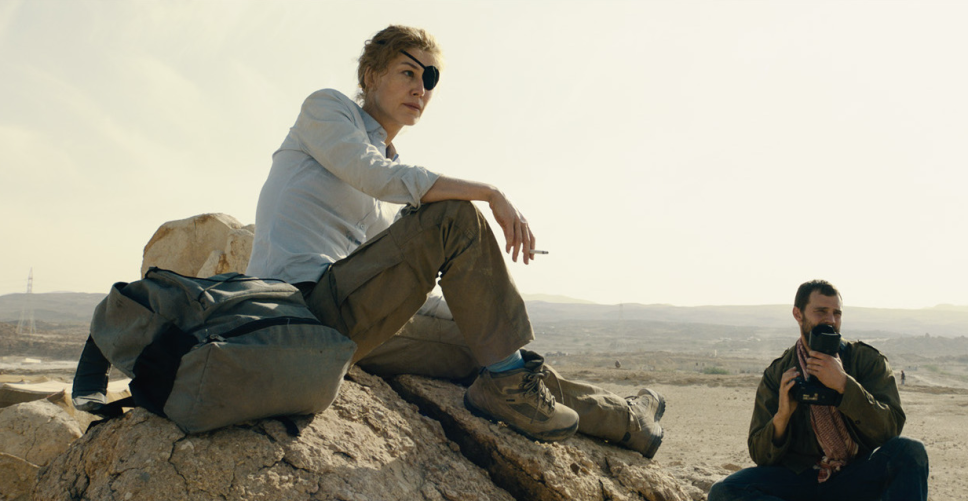