A Private War begins at the end. Or—more precisely—what looks like the world: in Homs, Syria, in the midst of that city’s three-year siege by Syrian President Bashar al-Assad.

The camera sweeps over the bleached bones of decimated buildings—the destroyed city appearing in 2012, less than year after the siege of the city began, every bit as decimated as it is today, some four years after it ended. If it wasn’t for the horror on display being our earth and in our time, it is the sort of epic shot you would expect to originate in one of Peter Jackson’s Middle-Earth fantasies.

This glimpse of the cost of war at an epic scale is immediately contrasted by something altogether more intimate. We see war correspondent Marie Colvin, played by Rosamund Pike, eleven years earlier, lounging on the bed of her London flat. Dressed in a black negligee, cigarette in hand, flirting with a husband she will drop like bad nickel before the end of the first act, Pike looks every bit as glamorous as a classic Hollywood starlet.

The film, directed by Matthew Heineman, the celebrated documentarian behind 2015’s Cartel Land, gets a lot of mileage out of the contrast. But this friction is dependent on Pike constructing a character that is at once larger than life—and able to be every bit as strong as the bombs exploding around her—but with enough psychological nuance for us to believe and be invested in her. It’s a star making part, the kind of role (gamine conflict zone correspondent who would be a hoot at a cocktail party) that in another era might have been played by Katherine Hepburn or Sigourney Weaver.

But to her credit, Pike, never lets Colvin’s outsized personality upstage the true focus of the film: the ruinous aftereffects of the wars she covers. Though in the beginning, it comes close.

With a loping gait and tenor voice, the vodka-swilling Colvin cuts a complex figure. Fearlessly—most would say recklessly—jetting off from one war to the other, she only occasionally stops in at the Sunday Times office to pick fights with her editor (Tom Hollander). It’s early on, while embedded with the Tamil Tigers in Sri Lanka, that she loses use of her left eye to a rocket-propelled grenade and acquires the eye patch for which she will become known, as well as lousy depth perception that makes pouring rosé into a wine glass a heroic feat.

In the hands of Pike, that favorite fashion statement of pirates becomes the least of Colvin’s affectations. From the almost violent intensity with which she drags on her ubiquitous cigarette (it would not be surprising if the Oscar-nominated Gone Girl star came away from the production with lungs befitting a Depression-era coal miner) to the way she savors the Long Island-born Colvin’s vowels as if they were the caramel inside a Rolo, Pike so fully commits to the surface aspects of her character that it risks becoming distracting.

This becomes especially true as the PTSD that Colvin refuses to acknowledge begins to eat away at her from the inside and her tics become even more pronounced. Indeed, as she begins to crack up—and her vodka habit starts to take hold of her—a performance that started as high wire act starts to resemble Philippe Petit’s stole between the towers at the World Trade Center.

But somewhat miraculously, Pike, ably supported by a subtle turn from Jamie Dornan as her longtime photographer Paul Conroy, ends up successfully building Colvin from the outside in, much in the manner of Meryl Streep. So much so that—by the end—you think less about her than about the increasingly gruesome and pointless wars from which she never allows herself to avert her eyes. From Iraq, where she breaks away from the military-sanctioned embeds to uncover a mass grave, to Afghanistan, to finally and most profoundly, Syria, the suffering of the ordinary people who Colvin made the focus of her dispatches comes to the fore and delivers a walloping emotional catharsis.

Indeed, by the time that Colvin, as one of the last reporters still in Homs during the assault by Assad’s forces, details and contextualizes her experience—live on air to Anderson Cooper—I completely lost it. It struck me in a raw, emotional way that documentaries on the subjects—including Talal Derki’s 2013 The Return to Homs and Heineman’s own take on the subject, 2017’s City of Ghosts—have not. I must have cried for a good twenty minutes after it was over, if not longer.

It wasn’t because this time it was this glamorous, witty white lady taking it on chin, I don’t think. Perhaps it had something to do with the week of terror that had just past, culminating with the slaughter of eleven people in a synagogue in Pittsburgh, Pennsylvania. Or maybe it was because, through the lens of Colvin’s personal journey, all of that unimaginable suffering she witnessed was placed in the devastating context of war after war after unending war.

But a large part of the credit goes to Pike, who is given the meatiest role of her career—perhaps the most complex one of the season—and absolutely crushes. But not to the extent that it takes away from the film’s, and Colvin’s mission: forcing us to bear witness, after years of trying to look away. For me at least, there is no better way than that to honor the legacy of Marie Colvin and all the people whose stories she told. 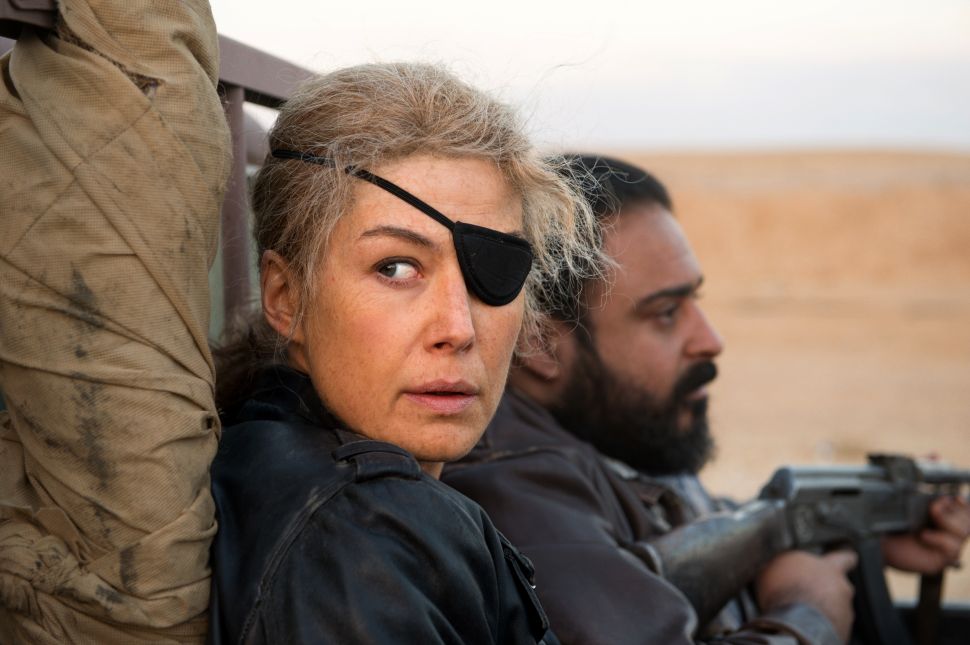