Every so often, there comes along a piece advertising that so aptly incapsulates the mood surrounding a bloodsucking corporate entity that you simply have to laugh. Such is the case with Amazon’s “Can You Feel It?” commercial, which is a minute-long endurance test of just how much hellish capitalist propaganda you can stand.

If you haven’t caught the holiday TV spot, it’s worth describing in intimate detail so that you never have to Google or watch it.

In a bizarrely ill-lit series of settings (think Paul Thomas Anderson meets Lars von Trier) that ranges from a cluttered office to a suburban home filled with children, ordinary citizens look on in shock and awe and gasp with freakish laughter as Amazon boxes containing hastily ordered last-minute presents break out in off-key song. The boxes’ mouths are the arrow swoosh omnipresent on every package shipped by the company.

Here’s the clip, if you feel like giving yourself a low-grade panic attack.

However, writer Omar Najam’s take on the commercial is much, much better, mostly because it’s about 20 times scarier. Najam swapped the spectacularly annoying jingle with composer Henry Jackman’s theme music from 2014’s Captain America: The Winter Soldier, which famously includes a distorted scream from Jackman himself.

Najam’s version is a lot more effective, to put it mildly.

I replaced the Amazon can you feel it commercial music with the theme from Winter Soldier pic.twitter.com/rXMcDGoWcJ

As frantic shoppers go about their daily routines, scrambling to cobble together gifts that their loved ones won’t disown them for buying, an ominous, Handel-esque choral voice hovers like a vengeful ghost over a droning synth bass note.

Timpani drums pound in the background as though hinting at a forthcoming ritual sacrifice. The Amazon boxes, their sinister mouths agape, smirk menacingly and mock us. The humans in the video smile as well, because frowning would reveal their genuine horror. The boxes have won. The boxes are our rulers now.

Amazon’s insidiousness has a ton to do with its convenience, and how easily its messaging convinces its customers that they are just too busy to plan anything in advance. Amazon positions itself as the only option, the last defense between just barely scraping by and utterly disappointing our family members.

Najam’s video exposes Amazon for what it truly is: a deceitful monster disguised as a smiling guardian angel. A creature this clever cannot be stopped. 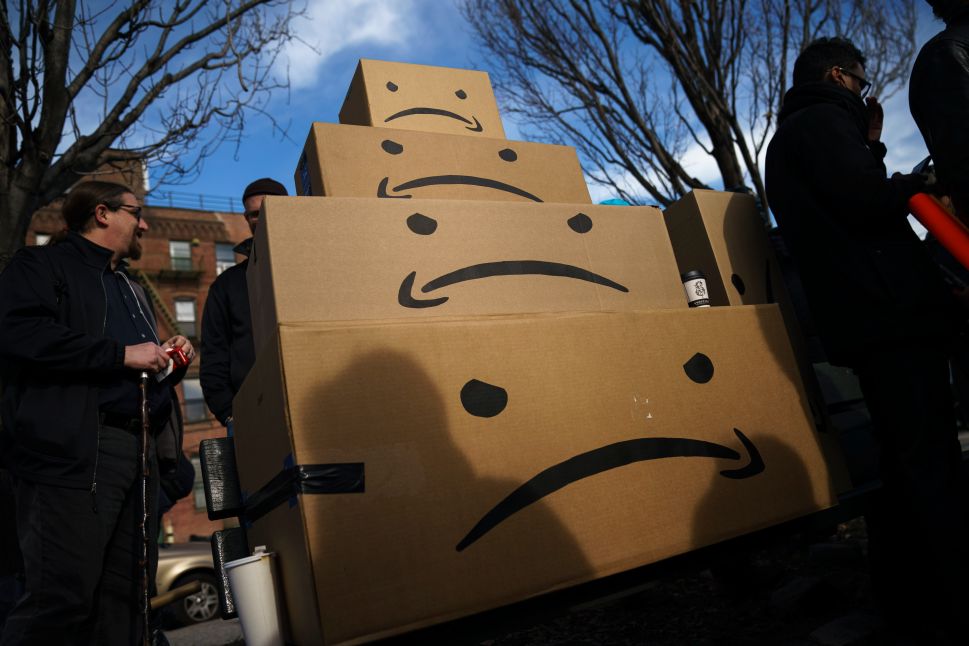