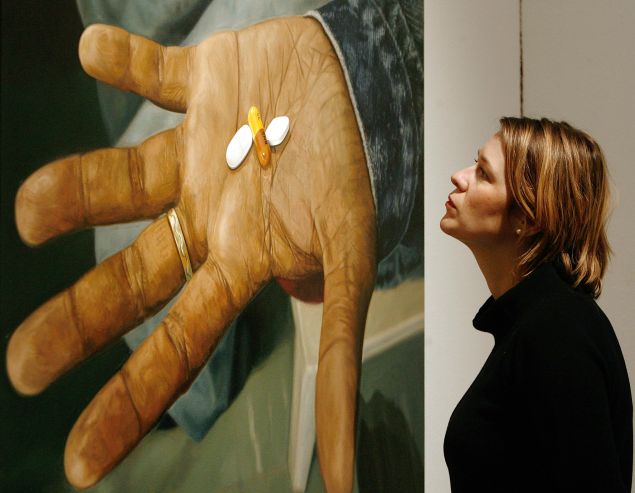 A viewer looks at a painting by Damien Hirst. Cate Gillon/Getty Images

Art museums offer quite a few side benefits for visitors—from a venue for classes, lectures, film screenings and concerts to a place to grab a meal, conduct academic research or shop for reliably odd presents in the gift store. But now, one might add to that list museums as a medical treatment for asthma, cancer, diabetes, dementia, eating disorders, heart disease and a number of other physical and cognitive ailments. The medicine, according to a number of doctors, is the art itself.

“Just being in a museum looking at art has real health benefits,” said Dr. Hélène Boyer, head of the family medicine group at the CLSC St-Louis-du-Parc in Montreal and vice-president of Médecins francophones du Canada. “People in pain, patients who have high blood pressure or high cholesterol or shortness of breath, or those who simply have so much stress from hearing a doctor’s diagnosis that they cannot follow the doctor’s orders—they can all benefit from going to an art museum.”

As a result, the 2,000 doctors who are members of Médecins francophones du Canada will be able to prescribe a trip to the Montreal Museum of Fine Arts in a new one-year pilot initiative that began on November 1. A doctor’s note makes the visit free for the patient, which includes the patient’s caregiver and three members of the patient’s family. The regular adult admission price is $23 (Canadian). Each physician will be permitted to write up to 50 prescriptions annually, sending their patients to the museum rather than just to the drug store.

The dose of a museum visit, which Dr. Boyer called a “museoprescription,” will not replace the more standard prescribed medicines, but it might change the dosage a doctor prescribes—the effect of taking in art has been found to aid in reducing pain or shortness of breath, slowing heart rate and improving mobility. One widely identified response can be tracked in a person’s levels of cortisol and serotonin. Serotonin, which is produced in the gastrointestinal tract, regulates mood, sleep and social behavior, while cortisol, which is secreted from the adrenal glands, helps to regulate blood pressure, reduce inflammation and boost energy.

“We have measured the levels of cortisol in the saliva of people just about to enter a museum and then 45 minutes later,” Dr. Boyer said. “The level of cortisol was lowered significantly, and that has a positive physiological effect.”

The potential medical benefits of experiencing works of art is not new, but the idea that doctors could prescribe a visit to an art museum was developed by Nathalie Bondil, director general and chief curator at the Montreal Museum of Fine Arts, who refers to the initiative as “museotherapy” and who presented this idea to Médecins francophones du Canada as a trial collaboration. The concept was not a stretch to the CLSC—they had already been researching the beneficial effects of cultural involvement on the sick. “I am convinced that art offers a biochemical impact on our emotional and physical health,” Bondil said, noting that the concept extends beyond works of art to music, dance and writing. “Culture is good for your health.”

The Montreal Museum of Fine Arts is the first institution anywhere to have set aside physical space and created a scientific committee dedicated to art and health, she added.

Many in the medical field understand the benefits of art, dance, music and writing on those suffering from cognitive and physical impairments and, in fact, a century’s worth of clinical research has been conducted on the benefits of the arts in healthcare, according to Naj Wikoff, a faculty member of Lesley University’s Institute for Arts & Health and vice-president of the San Diego-based National Organization for Arts & Health. “After the First World War, the military used music therapy and art therapy to help patients suffering from shell shock, what we now call PTSD,” he said. 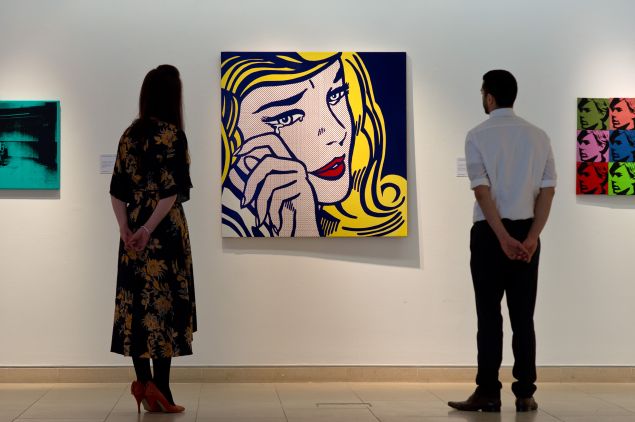 In the 1940s, New York’s Museum of Modern Art established a War Veterans Art Center with the goal of using “art to help veterans rehabilitate and re-enter civilian life,” said Francesca Rosenberg, director of the museum’s Community Access and School Program. More recently, MoMA created a free program to serve individuals suffering from dementia and Alzheimer’s Disease, as well their caregivers, through guided discussions of artworks in the museum’s collection and hands-on art projects. A New York University study of its program found that it “had a significant benefit to both the patients and their care partners,” she said, “helping nonverbal people express themselves in ways they were not able to before, lifting their spirits and making them feel more connected to other people and more connected with the works of art they see on our walls…These benefits lasted beyond the time they were at the museum.”

Dr. Boyer stated that art is not merely a distraction for the ill, nor is it a placebo that might make them feel better even if no medical treatments took place, although making patients feel better is important. “Hearing a diagnosis is a very stressful moment for a patient, and it can be very difficult for them to accept their condition,” she said. Looking at, and talking about, artwork enables patients “to be able to talk about what they are feeling with their family members and loved ones. Museoprescriptions along with medical prescriptions have helped patients to accept their conditions and to be willing to deal with their illness.”

The use of art in the treatment of patients with all manner of ailments is an integral element at the Cleveland Clinic in Ohio whose Arts in Medicine Institute has sought ways to alleviate pain, cancer, shortness of breath, high blood pressure, high cholesterol, eating disorders, heart ailments and pulmonary disease. Lisa Gallagher, research program manager at the Institute, told Observer “The arts haven’t cured anything, but they have helped people feel better and develop better coping skills that can be used outside the hospital. For instance, we have found that with oncology patients, especially those in palliative care, their mood has improved, their anxiety and pain lessened.”

The Cleveland Clinic also has sought to reduce patient stress by installing more artwork in waiting areas and hallways—the hospital owns a 6,500-work original art collection in addition to 15,000 art posters—and offering music and dance performances for patients. “Those who looked at the art on the walls or saw a performance feel better. It makes the time go more quickly and makes the overall experience of the hospital better. Hospitals can be very stressful places.”

A 17 year-old Manhattan-based nonprofit arts organization, RxArt commissions artists to produce site-specific artworks for pediatric hospitals around the country in order to bring the museum experience directly to children. At St. Mary’s Children’s Hospital in Bayside, Queens, for instance, is Dan Colen’s painting of falling confetti on the walls and ceiling of a 2,500-square-foot Activity Center. RxArt has completed over 40 projects in hospitals throughout the U.S., including St. Jude’s Children’s Research Hospital in Memphis, Tennessee, Children’s Hospital Los Angeles and Boston Children’s Hospital. Among the commissioned artists are Rob Pruitt, Jeff Koons, Laura Owens, Ed Ruscha and Kenny Scharf. Most of the projects take several years to complete and cost between $50,000 and $300,000 apiece, the funding coming primarily from individuals, as well as corporations and foundations. The hospitals themselves pay nothing.

Diane Brown, a former art dealer and curator and now executive director of RxArt, said that her aim is to make hospitals “less scary places for children and provide inspiration and comfort for families and staff.” She added that all patients need the benefits that artworks can provide but, as a practical matter, “we couldn’t do everything everywhere and decided to concentrate our efforts on pediatric hospitals.” Her own inspiration for RxArt came when she underwent a CatScan, entering an all-white room, “Afraid that the doctors would find what they were looking for, I was panicking, and the only way to get out of that room was through my imagination. I looked at that white ceiling and began to think about paintings,” imagining what the room would look like with the work of certain artists on the ceiling and walls.

If she were in a panic, what must children feel? Brown decided that works of art in a pediatric hospital would “distract and please” children. “It would take them out of the hospital in their imagination, even if for a few minutes.” She brought up the idea for RxArt “with various critics, collectors and curators I know, and everyone said I was crazy, except Agnes Gund”—a past president of the board of trustees of the Museum of Modern Art and current chair of MoMA PS1—“who told me ‘Go for it!’”

But though there are doubters about the ability of art to positively impact medical conditions, if the trial with the Montreal Museum of Fine Arts proves fruitful, that might change. Image if every cultural institution opened its doors for free to a person in need? With a note from their doctor, of course. 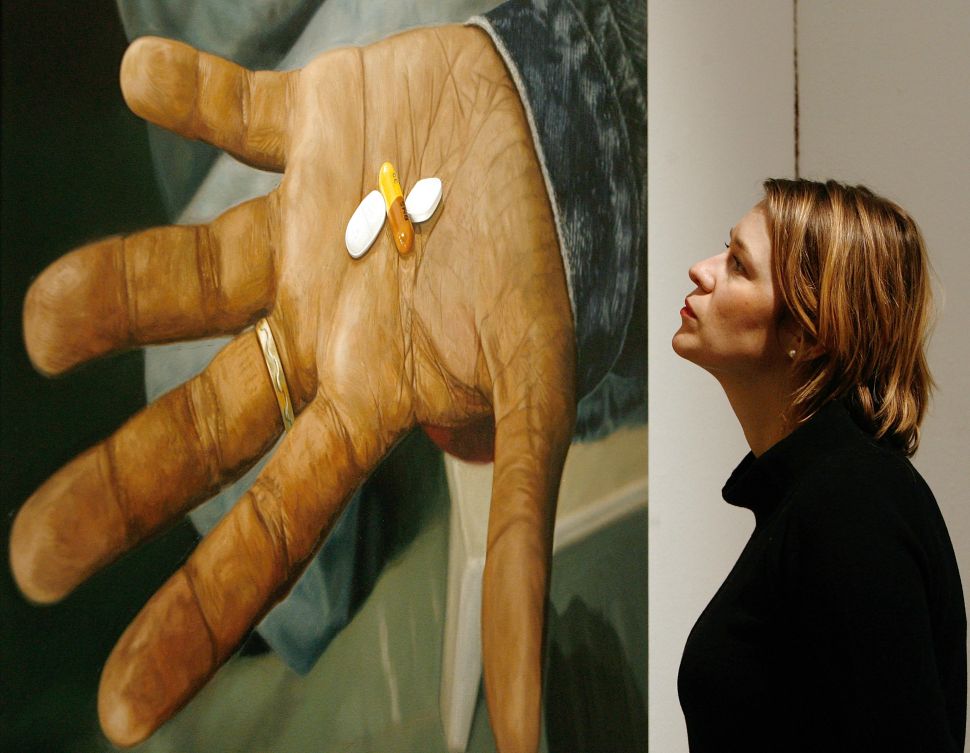