Neal—author, editor, satirist and car semi-enthusiast: From time to time, and sometimes all the time, I get cars delivered to the house to review. This has been going on for a few years. I prefer wimpy cars, or comfortable ones. I’m known as a go-to guy for pretty much any hybrid that exists, and I’ve rarely met a snoozy Lexus I didn’t like. Mostly, though, I sit around and pray for the day when self-driving electric cars become the norm so I don’t have to worry anymore.

But even I can’t resist a Hellcat.

The other day, there was a Dodge Challenger Hellcat parked in front of my house. But it wasn’t just a Hellcat, it was a Hellcat “Redeye.” This is a new version of the Hellcat that Dodge has concocted for 2018. They basically slotted the drivetrain of the Dodge Demon under the Hellcat’s massive world-eating hood. In the Demon, it gets more than 800 horsepower. In the Hellcat, it only gets 797 because the car’s hood is so large it needs its own parking space.

“Redeye,” I assume, refers to red eye gravy, semi-popular in the South. It’s made of ham drippings and ground coffee. Like the car, it’s very tasty and also kind of disgusting. It fills you with regret but also the desire to plunge in again.

This Hellcat, a killer-looking “Octane Red,” basically an angry maroon, just begged me to take it out for a spin. And spin it I did, all $88,900 of it, around the neighborhood and beyond. The speedometer tops out at 204. I think I may have tapped the gas a few times and gotten it to 90. It roared me throughout the suburbs. I felt like a real tough guy.

“You definitely know when it’s you coming down the block,” my wife said.

But the Hellcat Redeye offered me an opportunity beyond just doing peelouts on DK Ranch road. It gave me a chance, possibly the last one, to have my 16-year-old son Elijah think I’m cool. On Saturday, Elijah cleared his calendar for an hour and agreed to go for a ride with me. He’s just started driving. But he’s not driving anything like this. Here’s what he thought:

Elijah—Neal’s 16-year-old son: It was fucking awesome. I sat in the car, my dad drove out into the street, he pressed this “Launch” button, stepped on the gas, and it was like taking off on a rocketship. Going to 25 miles an hour feels like starting on a roller-coaster ride. The zero to 60 feels like literally no time at all. One second, you’re sitting there in a completely-still vehicle, the next second you’re blasting down the street at 90 miles an hour.

We went on this windy, curvy backroad. It handled the turns so well. It didn’t skid at all or anything. It felt so smooth. The acceleration was insane. You could feel that you were going fast in it, you know. I love it when you can really feel the car. It’s not one of those cars that’s designed not to feel.

It looks badass. If I had that, I’d drive downtown in it. Make some new friends, get some money. Drive up to prom in a top-model Hellcat? Hell yeah! If you’re in high school and you owned a Hellcat, I’m sure you could afford to rent a limo. But why bother doing that when you own a badass-looking Hellcat?

Neal: This isn’t a car for normal people who want a safe trip. The car fishtailed, and then corrected itself, on an average turn. It squealed. It smoked. My son had been duly impressed. Now I wanted to share the experience with more teenage boys. After all, the Hellcat Redeye was designed for them, or for people who think like them. We pulled up to a townhouse and a bunch of bros piled into the car, like normcore clowns.

Elijah: We pick up three of my friends. They were completely blown away. They were all like, this is the fastest car I’ve ever been in. They loved it. They kept talking about it for the rest of the day.

We drove around on this super-curvy backroad in our neighborhood. It’s like this narrow road with all these trees around it. In this canyon. It’s beautiful scenery. We were zooming down the street. We could really feel the car moving. See all the trees just whoosh by. Listen to music. Roll down the windows.

It was almost Halloween so we were listening to “Helloween,” by the band Halloween. It was like a 25-minute song. The whole time were in the car we had that song on. I swear to God. And it was a pretty awesome sound system. After that we listened to Ozzy’s Boneyard on Sirius XM, which is probably the best station to listen to in the Hellcat. 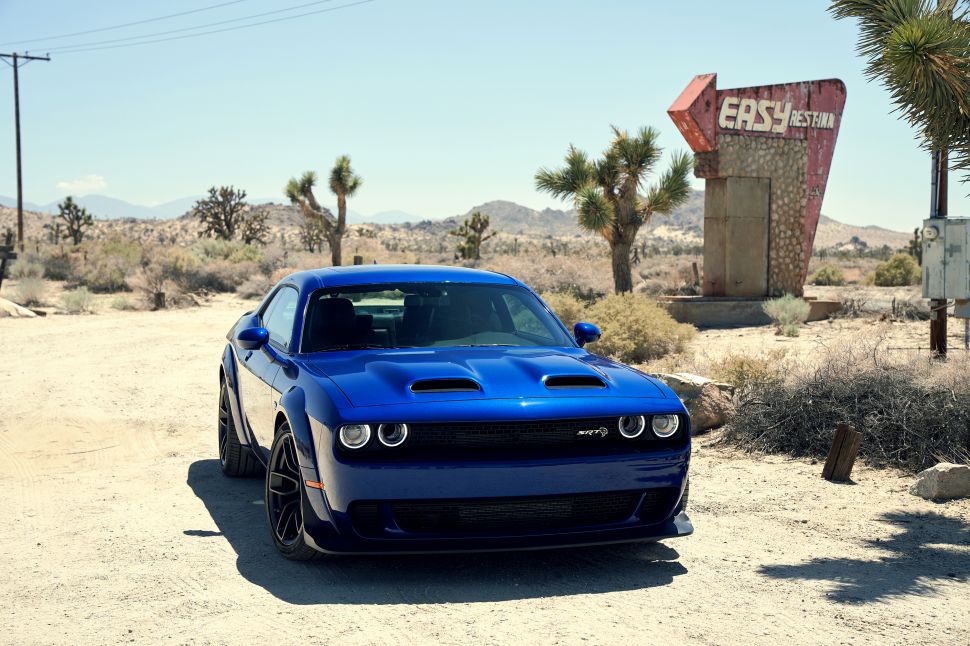