The estimable talents of Tyne Daly and her handsome, versatile brother Tim Daly have been enjoyed in various projects for years by fans and followers alike, but in a new play in New York entitled Downstairs, the two siblings are joining forces onstage for the first time. What’s more, they’re playing siblings. It’s a dark, talky, somber evening by uneven, prolific playwright Theresa Rebeck that will not please anyone seeking a coherent, well-written play in a naturalistic style, but the performances by the Dalys (and their co-star, veteran actor John Procaccino) are well worth a trip to the Cherry Lane Theatre in Greenwich Village.

Lasting one hour and 45 minutes without the interruption of an intermission, Downstairs takes place in the setting described in the title—the cluttered basement beneath the suburban home of a woman named Irene. It’s dank and ugly and an obvious refuge from reality of the sunlit world on the outside—a perfect hideaway for Irene’s dysfunctional brother Teddy, who has arrived to camp out on the dilapidated sofa with no indication of departing. Since it’s a cellar space used by her husband Jerry, replete with a broken computer Irene is forbidden to use, she clearly wants to know how long her brother plans to hang around in his underwear, doing nothing.

In the conversations that occur, old wounds morph into open resentments. Unable to hold down a job, Teddy has nowhere to go and no money to go anywhere anyway. When their mother died, she left everything in her will to Irene. She used it to buy the house. Teddy has always felt unfairly cheated. To make matters worse, Irene’s gruff, domineering husband Jerry hates her brother and is capable of inflicting violent bodily harm if provoked. There doesn’t seem to be an easy answer to their problems.

So the siblings share a troubled history. Irene feels an obligation to her brother, but she’s afraid of her husband. Teddy sincerely believes he’s toxic because someone hostile at his last office job poisoned him  by stabbing him with an infected pencil. She’s a nervous wreck whose life has not worked out, so she spends her time baking cakes. He’s a neurotic hypochondriac who wants to withdraw from life and hide.  They both have a talent for babbling incessantly without ever really connecting with each other or making much sense to the audience.

It’s fascinating, but while you wait patiently, fitfully and fearfully for Jerry to descend the stairs, nothing much happens you could label “action.” In the interim, Teddy proves the broken computer Jerry has forbidden his wife to use is not really broken at all and convinces his sister she is married to a monster with a demon instead of a soul. When Jerry appears at last, he’s every inch the potential menace we expect. Teddy is ejected from the house, Irene opens up the computer, and the shock of what she finds inside drives her close to madness. John Procaccino looks like an ordinary fixture in any domestic drama, but beneath the calm mask and familiar pot belly of a typical suburban husband, the terror he hides is palpable.

When Teddy returns, like the mangy, flea-bitten rescue dogs she used to bring home that her husband killed behind her back and buried in the back yard, Irene surrenders to family dysfunction and agrees her brother has at last earned his place in the basement. In his absence, she confesses, she called the police. They took one look at the contents of the computer, sent Jerry away to prison, and threw away the key. So what is the secret in the basement computer? Child pornography? Author Theresa Rebeck enjoys secrets and isn’t about to give any away just to satisfy a frustrated audience. We are left to our own imaginations.

Meanwhile, the Dalys fill their characters’ flawed personality constructs with nuance, observation and self-control. She tries to camouflage her desperation with good deeds and an unwavering smile. He blinks a lot like he’s trying to adjust to the dark, shifting his legs back and forth as though he’s lost his equilibrium. Directed with balance and vision by Adrienne Campbell-Holt, Downstairs doesn’t add up to much, but what’s there is riveting and suspenseful. The siblings are free at last to take care of each other, welcoming the safe embrace of the dark…downstairs. 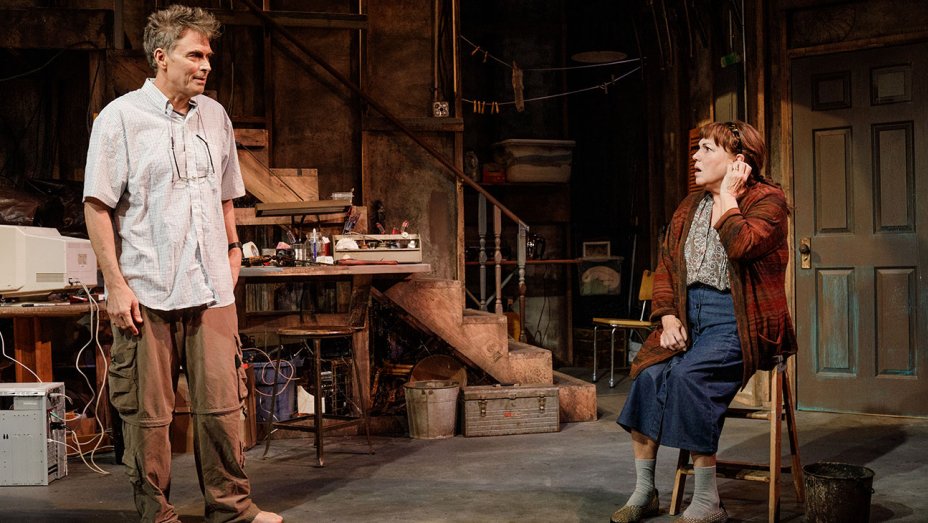