I’ve watched every episode of the six seasons of Downton Abbey. But I have to admit, after a certain point, the only character that kept me watching was not any ladies or lords, but the magnificent mansion in which all the Crawley family’s drama unfolded located on the TV series’ fictional Yorkshire country estate.

Last week, the real owners of the Downton Abbey castle, George Herbert and his wife Fiona, the eighth Earl and Countess of Carnarvon—who at first sight bore a striking resemblance to the Crawley couple in the TV show—appeared in New York City for the release of Highclere Castle Gin, a spirit named after their now world-famous home in North Hampshire, England.

The Highclere Castle Gin is the second brand partnership the Carnarvon family has formed with entrepreneur Adam von Gootkin since last year’s Highclere Castle Cigar. Lord Carnarvan said the gin, inspired by botanicals from the castle’s herb gardens such as juniper, lime flower, orange peel and lavender, was a form of paying homage to the rich history of farming and entertaining at his family’s 339-year-old estate.

Downton Abbey is a story about how an old-money aristocratic family struggles to cope in the modern age. And the real story of Highclere Castle is similar in a sense.

In an interview with Observer, Lord Carnarvon likened running his family heritage to “running a small business.” “You have to work hard and make things happen,” he said.

The Highclere Castle we see today has been the home for the Carnarvon family since 1842. The changing of times from the Industrial Revolution’s 19th century to the war-embattled early 20th century has largely diminished the noble family’s wealth. But the 6,000-acre ancestry estate, with a 300-room manor in the center, still costs a fortune to maintain. According to a 2013 New York Times article, the castle alone costs $1.5 million to run every year, and that doesn’t include any major renovations or repairs.

Today, besides the family-branded gin and cigars, Lord and Lady Carnavon’s most important business is hospitality on the Highclere estate itself.

On most days, Highclere Castle accepts over 1,000 visitors coming from all over the world who pay a minimum entry fee of £25 for a tour of the real-life “Downton Abbey.” Special visits of more private areas, like the kitchen and bedrooms, as well as seasonal tours, can be purchased for extra fees.

“England is very specially lucky for its glorious heritage of large country houses. But they are meant to be enjoyed by a number of people. They are meant for parties and gatherings, indoors and outdoors. That’s the whole part of the Highclere life, really,” said Lord Carnarvon.

Pressured by the need to balance income and expenses, Highclere has been open to public visitors since the 1990s (back then, tickets were £5 each). And unsurprisingly, tourism interest skyrocketed after Downton Abbey became a global television sensation.

In the wake of the show’s massive success, Lady Carnarvon even started a blog to document her day-to-day life on the estate in the form of videos, personal essays and recipes. (Fun fact: Lord and Lady Carnarvon lived in the castle throughout the filming of Downton Abbey. The castle was used for exterior and most of the interior filming of the show, but the kitchen and bedroom scenes were shot in a film studio.)

Over the past eight years, Lady Carnarvon has also authored three books, two on the history of the Highclere estate and one on modern-day life inside the castle. Today, aside from the hospitality business, a majority of her time is spent running the blog, promoting her books and managing the social media and other marketing channels around them, as well as dealing with frequent visits by reporters and TV crews, who come into the castle on a weekly basis.

Asked what the biggest misconception Americans have about the British aristocracy: “That we sit around doing nothing!” Lady Carnarvon answered with a laugh.

“Through the blog, I try to communicate that, there is a glamorous side, but underneath it, we are a hardworking couple,” she added. “We have to be a modern business in spirit, even if we have older traditions in other ways.” 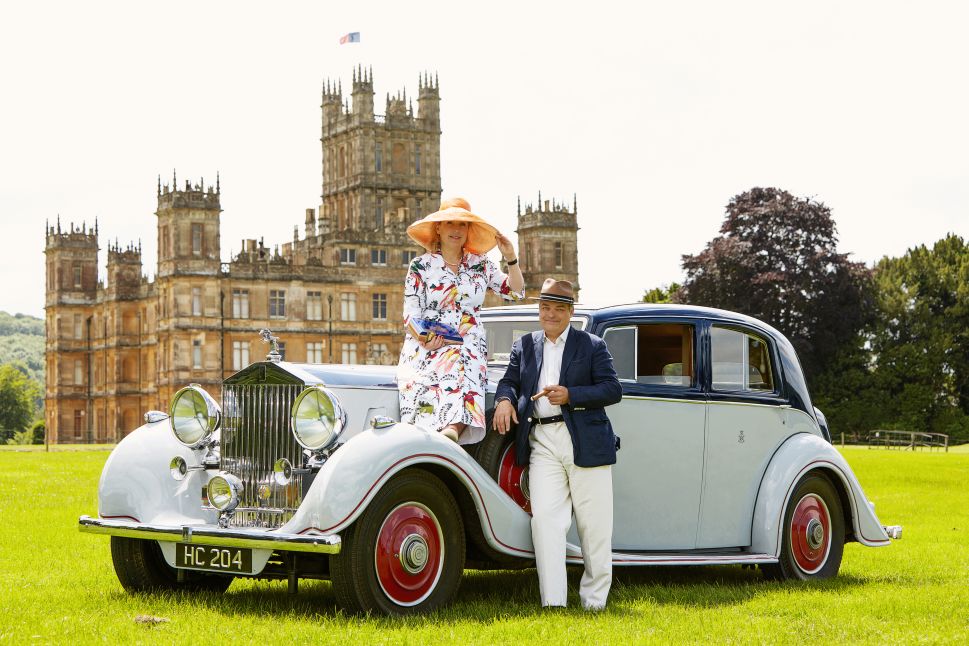