Before I saw Fantastic Beasts: The Crimes of Grindelwald in an upscale mall in Los Angeles, two of the films stars, Eddie Redmayne and Jude Law, appeared in a clip on screen. They were there to introduce the film, a la Alistair Cooke, and to share footage of characters from past movies set in J.K. Rowling’s beloved Wizarding World. (This was proceeded by a commercial for the Harry Potter attraction up the road at Universal Studios, which was offering a buy one day, get one day free during the Christmas season, blackout dates apply).

After a few words from Redmayne—who reprises his role as Newt Scamander, the charmingly off-kilter Magizoologist with a New Wave hairstyle from 2016’s Fantastic Beasts and Where to Find Them—Law, who in this film does a disaffected bachelor take on the esteemed Professor Dumbledore, spoke about the endlessly rich world that Rowling had created.

He speaks the truth, of course, but not in the way he meant it. The world Rowling dreamt up during the Tony Blair era is getting no richer after this installment, but its creator and various producers certainly will be.

The latest iteration feels less like a journey to the magical land that exists just beyond our own than an extended slideshow of someone else’s vacation there long ago, followed by extensive citations and footnotes. The story is of the late 1920s rise of the dark wizard Gellert Grindelwald, played by Johnny Depp, riding the fader between Billy Idol and James Mason. He is gearing up for a war to shatter the well-settled peace between wizards and the rest of us Normies, which they variously call Muggles or No-Majs.

On the other side, there’s Grindelwald’s former friend Dumbledore, desperate to keep the peace but—for various reasons that are extremely significant—unable to confront Grindelwald directly. So Dumbledore enlists his former student Scamander to have a go at him. Along with the various titular creatures he keeps in his briefcase, Scamander gets assistance from the American Auror (that’s a good wizard who officially gets to tussle with the dark wizards) Tina Goldstein (Katherine Waterston) as well as his Muggle buddy Jacob Kowalski (Dan Fogler), who is meant to provide comic relief.

Grindelwald is trying to sell wizards—especially the Pure-bloods—on the idea that these tremendously privileged folk are actually the ones being repressed. (Sound familiar?) Along with the always-attractive sets and costumes, the film’s portrayal of the rise of this all-too-real fantasy fascism is one of the few things that gives the busy and incrementally plotted film any heat.

While the presence of both Law and Depp is a little distracting—the film could also be called The Proxy War of the Long in the Tooth Former Hotties—the acting is generally strong. But here the film’s best assets are also criminally underused. This is especially true of the alluring Ezra Miller’s Credence Barebone. While the character’s true identity and position in the world’s mythos is central to the story; the actor is barely in the movie. It’s as if Harry Potter spent all eight of his films trapped under the Dursleys’ staircase.

Of course, someone making the film could have noticed this and mentioned it to Rowling, who wrote the script herself. She would benefit from having push back from an equally strong artistic voice, reminding her to luxuriate in her world rather than jump to another reveal, and she arguably hasn’t had that since Alfonso Cuarón directed 2004’s Harry Potter and the Prisoner of Azkaban. By comparison, director David Yates, directing his sixth film set in the Wizarding World, is more of a functionary.

At the screening, we were all given buttons that said #ProtectTheSecrets, likely meant as a not particularly well-veiled threat to critics not to spoil any of the film’s precious plot revelations. (The…”Or We Won’t Invite You to These Screenings” was assumed and did not need to be hashtagged.) The buttons were emblematic of the problem with this era of Rowling’s miraculous and now (sadly) never-ending story: plot is all that’s on offer. It should supply wondrous experiences—a new shop to explore in Diagon Alley or a thrilling Snitch chase in a Quidditch match—and not just plot points for a story in which we are becoming increasingly less invested.

Divorced of the sense of discovery that has been Rowling’s stock and trade since the first Harry Potter book was published 21 years ago, those story points become nothing more than little trinkets that get dropped into the bottom of a drawer, eventually to be forgotten. 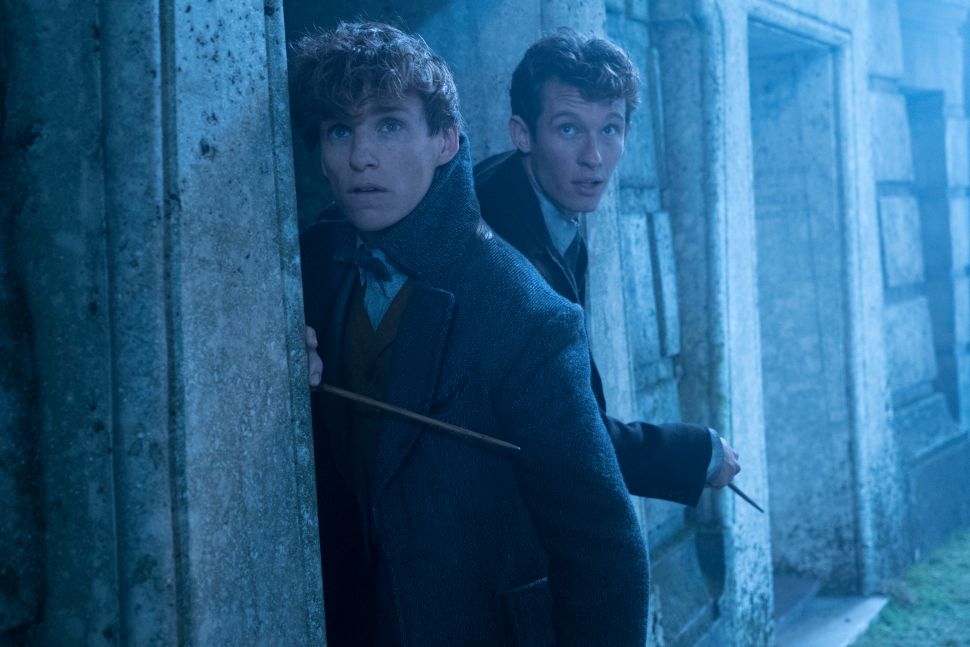