Not simply a worthy addition to David Fincher’s vastly under-appreciated The Girl with the Dragon Tattoo franchise (they’re calling it a “soft reboot,” but there’s nothing soft about it), The Girl in the Spider’s Web is also a top-shelf Batman movie. For good measure, it kicks the butt of the last few Bourne installments too.

While its visual style and the sheer variety of its muscular set pieces make it several slices above most action thrillers, what truly sets the film from Uruguayan director Fede Álvarez (2016’s Don’t Breathe) apart is its thematic intensity. Yes, it boasts a formidable and diabolically evil “Big Bad” to face off with the movie’s protagonist Lisbeth Salander (Claire Foy, taking the reins from Rooney Mara), but this film makes its real target clear from its opening frames: the tyranny of institutional misogyny. With a singular fury it shares with its hero, Spider’s Web takes aim at this diabolical force in a way that is not only deeply satisfying considering the current political and social climate, but also fiendishly entertaining.

Given the deep and icy blues and grays that infuse every frame with a heavy Nordic feel, the series—based on characters created by Stieg Larsson (from the fourth book, written after Larsson’s death by David Lagercrantz)—feels like it’s not just a film franchise but also an Instagram filter. But the film’s precisely calibrated frozen industrial style belies the red hot anger that courses through its veins, typified by an early sequence where Salander, disguised within a statue of angel, emerges to exact vengeance and extort money from a businessman who likes to beat up prostitutes.

But being an avenging angel who prefers to dress in black (including underwear) is just one of the many ways Salander represents a fresh spin on the Batman mythos. Like Gotham’s Caped Crusader, her powers and purpose are born of childhood trauma. (Her’s was caused by her father rather than inflicted on him by outside forces, as was the case with Bruce Wayne). In addition, she seems to have an endless supply of gadgets that she uses not just to zap the bad guys but also to hack the apparatus of a corrupt or clueless state and use it against them. Both on its surface and below it, the film carries a powerful theme about the twin webs of technology and emotional anguish and how they weave together to sometimes empower us, but more often keep us entrapped.

To that end, the central plot involves a computer program, FireFall, created for the NSA by a disillusioned programmer (longtime Ricky Gervais collaborator Stephen Merchant) that can breach most online missile defense systems worldwide. When the programmer becomes distrustful of Americans having that much power, he asks Salander to steal and destroy it, an act that puts her in the crosshairs of a onetime hacker turned intelligence agent (Sorry to Bother You’s Lakeith Stanfield) and a vicious criminal gang, the Spiders, who have a direct connection to her troubled past.

While Rooney Mara was excellent in the original, Foy carries Salander’s mantle with even more confidence and authority. Here, she’s less skittish waif and more straight up ass kicker. The Crown actor is able to convey so much with little more than a shift of her eyes—such as Salander’s special connection with children (the key to accessing FireFall rests with a child savant played by Christopher Convery). Of the three men that eventually aid her, both Stanfield’s unconventional agent and a hacker named Plague played by Cameron Britton (Ed Kemper in Netflix’s Mindhunter) register more fully than Mikael Blomkvist (Sverrir Gudnason taking over for Daniel Craig). A costar in the original film, Blomkvist has been demoted to Lisbeth’s assistant, though a subplot about how he has built his journalistic career on the back of Lisbeth plays nicely into the film’s assault on patriarchy in all forms.

And that is exactly what makes The Girl in the Spider’s Web—chockablock with action and violence but never chaotic or overstuffed—such an unexpected pleasure. While we patiently wait for Brie Larson in next year’s Captain Marvel, touted as the rare superhero film fronted by a woman, this film shows that day has already arrived. Not only is the terse Lisbeth endlessly powerful—she overcomes a bullet wound with little more than superglue and a stapler—but her strength comes directly from her feminine identity, which makes The Girl in the Spider’s Web the most unique and uniquely gratifying action film this year. 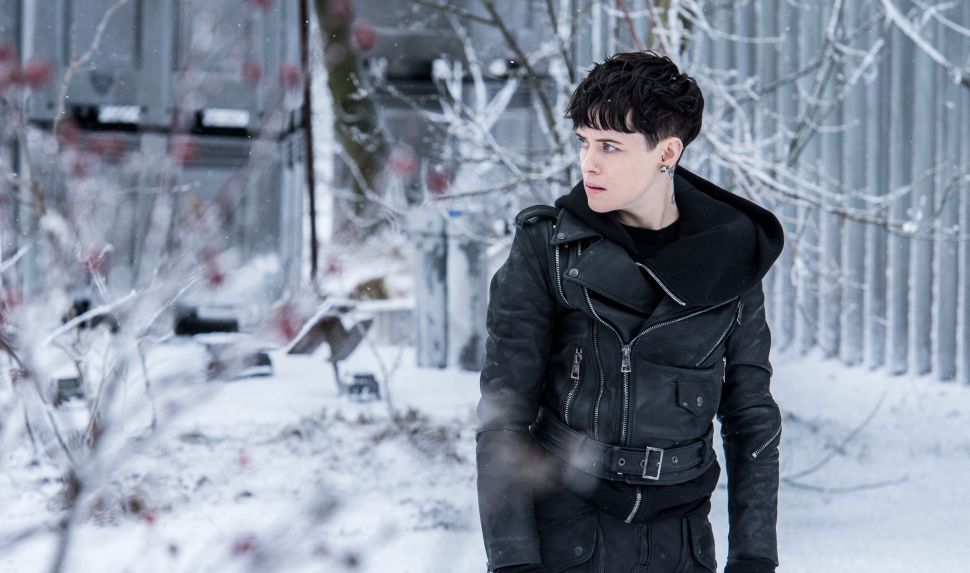