During its third-quarter earnings report last month, General Motors said it had benefited over $150 million in tax savings so far in 2018 from the GOP tax reform legislation passed last year. But this huge tax break has failed to save thousands of GM workers from cruel layoffs.

On Monday, GM announced that it planned to cut 14,000 blue-collar and salaried jobs, or 15 percent of its total workforce, and halt production at five factories (four in the U.S. and one in Canada) next year in a bid to reduce costs amid slowing sales and changing consumer tastes.

The affected plants include three car factories—one in Lordstown, Ohio, one in Detroit, Mich. and the other in Oshawa, Ontario—and two transmission factories in Baltimore and Warren, Mich.

“We are taking this action now while the company and the economy are strong to keep ahead of changing market conditions,” General Motors CEO Mary Barra said during a conference call on Monday.

But the news has stirred up a storm of anger and criticism on social media across politics and business.

“This is a bad combination of greedy corporations and policy makers with no understanding of economic development,” said Congressman Tim Ryan, who represents Ohio’s 13th district, where the Lordstown plant is located, reacting to the news with a series of tweets criticizing GM’s plan and urging Trump to save the lost jobs. “Corporations and the President himself are the only ones benefiting from this economy—an economy rigged against workers who are playing by the rules but still not getting ahead.”

Thousands of families have sacrificed to build GM into what it is today. And in return, GM has turned its back on us when we need them the most. This is a bad combination of greedy corporations and policy makers with no understanding of economic development. (3/8)

Corporations like General Motors and the President himself are the only ones benefiting from this economy—an economy rigged against workers who are playing by the rules but still not getting ahead. (7/8)

Canada’s Prime Minister Justin Trudeau said he was deeply disappointed about the closing of the Oshawa plant and that his government is looking at measures to help the affected workers “get back on their feet.”

“I grew up in a town where General Motors was the largest employer. I know how devastating layoffs at the plant are for the whole community. But it’s so much worse knowing that today’s closings are the result of unnecessary tariffs and White House political stunting,” billionaire venture capitalist Chris Sacca posted on Twitter following Monday’s news.

I grew up in a town where General Motors was the largest employer. I know how devastating layoffs at the plant are for the whole community. But it's so much worse knowing that today's closings are the result of unnecessary tariffs and White House political stunting.

However, many factors are at play for GM. Internally, the 100-year-old automaker is undergoing a major shift from mass-producing gasoline cars to exploring futuristic endeavors like self-driving and electric cars. In the meantime, external forces—particularly, China, GM’s largest market—have dented GM’s bottom line, wiping out much of the company’s savings from the GOP tax reform.

Hit by the one-two punch of China’s slowing automobile demand and the Trump administration’s ongoing trade disputes with the country, GM saw a 15 percent drop in third-quarter sales compared to a year ago. It was also the first dip in quarterly sales GM has posted in a year.

And GM was far from the only automaker damaged by tariffs, both on China imports and metal imports from other countries. Ford, whose third-quarter sales in China dropped 43 percent from a year ago, estimated that the tariffs would cost the company at least $1 billion in lost profits by the end of 2019.

In GM’s third-quarter earnings call with investors, CEO Barra said the decline in sales was not a direct result of tariffs. But the layoffs might be. In June, before Trump dropped another wave of tariffs on Chinese imports, GM warned the White House that the threatened tariffs could lead to “less investment, fewer jobs and lower wages” for its employees.

Through the workforce downsizing and plant closures, GM expects to reduce total annual costs by $6 billion by the end of 2020. Some of the affected factories could resume production, depending on the outcome of the company’s contract negotiations with the United Auto Workers union next year. 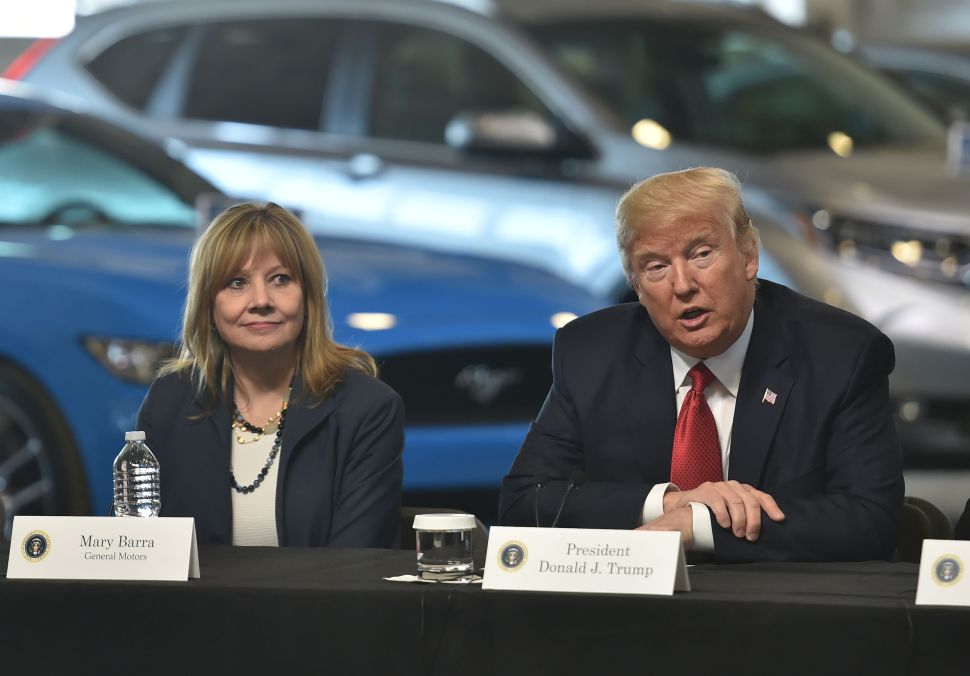