Oh, Robin Wright, you steely-spined wonder. You effortlessly enthralling power player. We could watch you verbally eviscerate the opposition with long-simmering rage and resentment until the end of time. No wonder you’re our top fancast to play Doctor Doom in the Marvel Cinematic Universe. But for now, you’ll have to settle for the often entertaining but rarely enlightening final season of House of Cards.

It came as no surprise when Wright was promoted to the series’ lead in the wake of Kevin Spacey’s sexual misconduct scandal. Even before allegations surfaced against him, a focus change for the show was brewing. Claire Underwood had ascended to the presidency, and Frank Underwood (Spacey) had been dispatched in a mysterious fashion. After five seasons of his increasingly monotonous duplicity, the character’s death results in a peaceful transfer of power between administrations—if only his shadow didn’t loom so large over Season 6 (at least in the first five episodes we’ve seen).

Claire is a far more absorbing protagonist than Frank ever was—the silver-blade gray to his midnight black. She’s equally cunning, but superior in depth. Wright positively radiates heat from scene to scene, shifting between the ferocity and nurturing instincts of a mother bear. She can make you wither with a glance and then win you over with one of her fourth-wall breaks, unlike Francis, who was always too stiff and slobbery to embrace. Caught between her own identity and agenda and the behind-the-scenes puppet mastery of big-business threats in the form of Greg Kinnear and Diane Lane’s Bill and Annette Shepherd, Claire must fight her way through the muck of Washington. But if the leadership has changed, the policies haven’t.

Serialized dramas rely heavily on plot to prop up their seasons, while sitcoms tend to be more character-driven. With the latter, the more familiar audiences become with the characters, the more ingrained and reliable the humor is (e.g., the running jokes about Joey’s love of sandwiches in Friends). However, with dramas—which are built on cliffhangers and piles and piles of crazy shit going down episode after episode—showrunners can burn through their best ideas early. That’s why countless shows devolve into a succession of ridiculous and implausible “and then this thing happened!” messes (e.g., the middle seasons of Homeland).

House of Cards has always leveraged the peaks-and-valleys binge structure of Netflix with these kind of plot machinations, but after a while it gets to be a bit much. If we’re being honest, the show has suffered from this disease for years. Season 6 is no different, as the political jockeying, scheming, betrayal and drama mix together to become a potluck of misery. Patricia Clarkson is always a treat, but are we supposed to remember who her character is? Is the audience meant to keep track of the seven or eight different concurrent threads and conniving meanies spinning their heaping plates of nonsense in a particularly dense early episode? Does any of this make sense? At this point, we sort of wish House of Cards would embrace a CSPAN-like, just-the-facts approach rather than pummel us with all of its twisty-turny hashtagable moments.


The gaping cynicism of these faux Washington insiders also paints a depressing picture of the actual current climate, especially against the backdrop of the real-life controversy in the White House. Art should never be afraid to go dark or risk turning viewers off, but the overwhelming nihilism present here is downright exhausting. If you want to feel even worse about our country’s state of affairs, switch over from the news to these backstabbing bastards.

Watching the early episodes of House of Cards‘ final season is like taking shots of tequila: Wright’s domineering presence and bitter reign at the top is hard to swallow, but good fun while you’re doing it. Indulge too much too quickly, however, and things can turn ugly fast. 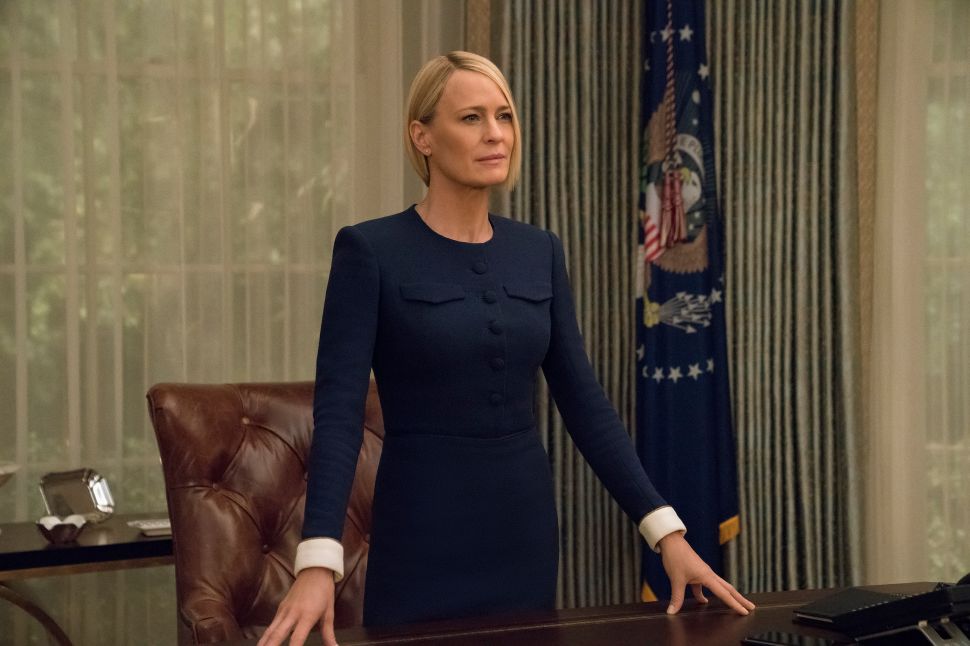