Hugh Jackman can do anything. From dancing in the shoes of Fred Astaire to polishing off banquets of high-voltage drama in the style of Robert Altman, he triumphs where others usually fail. Now, in The Front Runner, playing disgraced 1988 Democratic presidential “shoo-in” Gary Hart, he chronicles the downfall of a potentially great political leader, orchestrated by irresponsible journalists and morally indignant voters, because of an extramarital affair. Sound familiar? Brilliantly directed by Jason Reitman, from an intelligent, carefully researched and fast moving screenplay by Reitman, Jay Carson and Matt Bai (based on Bai’s marvelous book All the Truth Is Out: The Week Politics Went Tabloid), this enthralling film is a mirror to the shifting relationship between the media and politics, and the events that changed the last 30 years in American history.

After the two-term presidency of Republican Ronald Reagan, when Democrats were desperate to shift the focus from conservatism to liberalism and regain control of Congress, Colorado senator Gary Hart seemed to be the perfect candidate for leadership. He was smart, charming, handsome, an eloquent public speaker and a righteous powerhouse in the polls. He also symbolized integrity and a commitment to the U. S. Constitution, with experience as a lawyer, former campaign manager, father and husband to a dream of a future First Lady (Vera Farmiga as his wife Lee). How could he lose? The movie concentrates on the last three chaotic weeks of the Hart campaign when the charisma stained and the temple crumbled.

Using the old Robert Altman technique of overlapping conversations, multilayered sound effects and crackerjack pacing, Reitman plunges the viewer into the fever of an overheated election with breakneck speed to give us a feeling of public hysteria and smoky backroom bustle. In Hugh Jackman’s towering performance, we get every aspect of Gary Hart’s personality, from his reluctance to share his private life with the press to his sometimes offensive arrogance. You also get a candid rundown of the superficial points that catapult a candidate to the White House, including endless state fair barbecues, warnings about no flirtations with blonde fund raisers and just the right hairspray on a windy day. From the Iowa caucus to the Democratic National Convention, no detail is eliminated.

Then, suddenly as a slamming door, there was a shift in the weather when a pair of ambitious reporters from the Miami Herald, acting on an anonymous tip that Senator Hart was having an affair and under the pretense of press responsibility to hold presidential candidates responsible for their private lives, decided to make names for themselves by destroying his reputation for ethics and fair play. Under the guise of journalistic integrity, they stalked him, tailed him, hid in the bushes outside his house in Georgetown to photograph the lighted windows in his bedroom, then, without checking their facts, published a scurrilous expose that made national headlines, ruined a marriage and derailed an election.

In the resulting scandal, a man with high ideals who considered himself invincible was brought down by a single mistake. I felt defeat creeping into my bones with every discouraging blow and in the end, I could only think about how so many worthy presidential candidates have been headed off at the pass while so many thugs have sodomized public decency in elected public offices. No names necessary. You know who they are.

This is a responsible, educated, sophisticated and often deeply witty film about politics and journalistic responsibility in the tradition of All the President’s Men, The Post and The Ides of March. It is also another prime example of Hugh Jackman’s inexhaustible versatility that Gary Hart does not come off as a pariah. He’s the remarkable centrifugal force that propels the movie toward the moral high ground, but it is also chock full of memorable contributions from J. K. Simmons as Hart’s campaign manager, Vera Farmiga as his loving but long-suffering wife Lee, Mamoudou Athie as an idealistic young journalist from The Washington Post who gets a sober lesson in the ugly side of journalism, and a touching turn by Sara Paxton as Donna Rice, the girl caught in the middle of the muddle like a deer in the headlights.

You go away from The Front Runner with a lot of knowledge about the stupid way Americans build, support, deify, and then discard their heroes, but best of all, the movie reminds us again of the imperative privilege and responsibility of casting the right votes. If we make sex a more important criterion in the election of the people who govern our lives than the kind of human decency that comes from the heart, then we might get just the kind of rotten government we deserve. 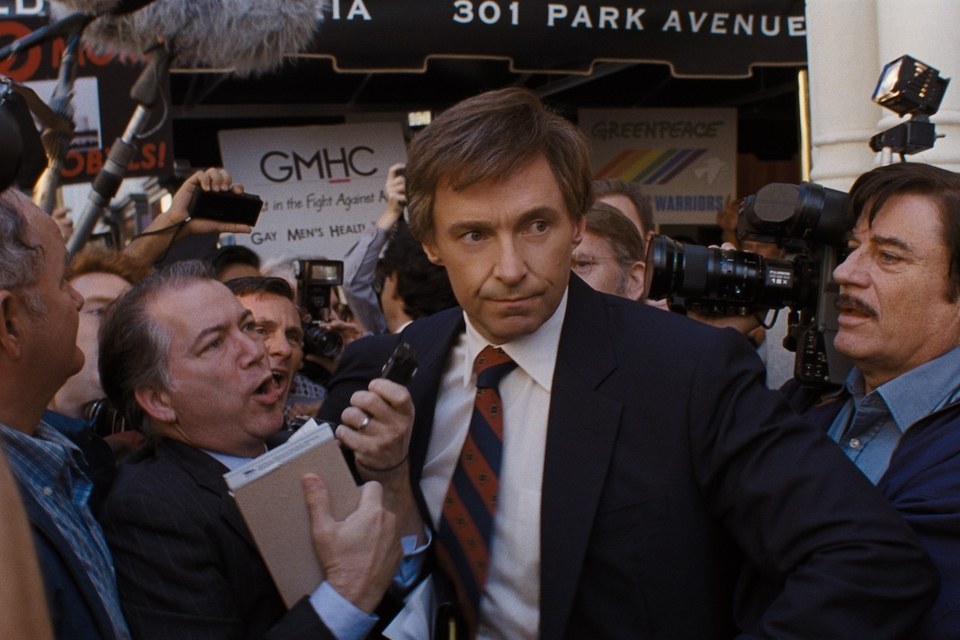