Instant Family is a contrived comedy with a soft center that looks gently at the problems that plague the overloaded foster-care system and the growing number of homeless children trapped in the red tape of the adoption racket without plunging into the dark side of either long enough to offend anybody. It’s too well-meaning to dismiss, but too self-consciously corny to praise unconditionally. It’s saccharine, full of cute children and accident-prone parents with a huggable dog named Meat Ball and gobs of money to keep everyone supplied with toys and presents to turn every day into Christmas, a happy Hollywood ending around every suburban mulberry bush, and so much sugar sprinkled over the entire menu that you could end up in need of an insulin shot.

For no convincing reason, Pete and Ellie Wagner (Mark Wahlberg and Rose Byrne), a successful career couple specializing in knocking down and re-designing old houses, decide to adopt three children after an exhausting, life-changing eight-week parenting program. The premise serves as a set-up for writer-director Sean Anders to create some jokey situations that show off Wahlberg in a role incongruent with his image as a pec-pursuing, ab-punishing action hero. In films such as The Fighter and Patriots Day he proved he could act with power and persuasion. In Instant Family, which he also produced, he seems hell-bent on proving there’s also a warm, human side to his Boston street smarts. It’s a treat to watch him do it.

In the parenting group, individual personalities emerge in the support group jockeying to be accepted as foster parents by supervisors Octavia Spencer and Tig Notaro, but the real comedy begins after the three kids arrive—abused, neglected latino siblings who have survived a drug-addicted mother and an unknown father to travel through the disabling system of a myriad of foster homes. At first the children seem smart, real, obedient and anxious to be part of a family. But they have agendas. Wily and manipulative, they know how to play the adoption game to prove who’s running the show. They are often ahead of the Wagners, waiting to pounce, but one by one the mistakes add up and the turmoil builds.

Once the “honeymoon” period is over, all hell breaks loose. The first basketball game produces a bloody nose. The youngest girl won’t eat anything but potato chips. The boy collects teddy bears he travels with to various family courts. And the oldest teenage girl is cynical and rebellious, defying the Wagners at every turn, resisting their rules, disrespecting their wish to be responsible parents. The kids wreck the house, set the dining room on fire, and wreak havoc on the lives of their new foster parents, as well as the Wagners’ family and friends. What Instant Family is about is the adjustment process that leads to eventual trust, friendship and love. Nobody seems to mind that it’s all been done before, by Cary Grant and Betsy Drake in Room for One Moore, by Henry Fonda and Lucille Ball in Yours, Mine and Ours, and by numerous others, but who’s counting?

The movie eventually falls apart and everybody ends up hugging each other in a preposterous finale that shows the kids as rehabilitated little angels who even learn to do chores cheerfully. I warmed easily to Mark Wahlberg’s sweet, sensitive side as a bumbling, panic-stricken dad. Rose Byrne is a fine counterpart as an intelligent woman coping with a new chapter in her life. And there is excellent support by the wonderful Margo Martindale as Wahlberg’s salty, no-nonsense mother, and in a delightful cameo, there’s a hilarious bit by Joan Cusack as a nosy, anonymous neighbor so broadsided by the hysterics on her block that she bakes and serves a pie to calm everyone’s nerves.  Add up the ingredients and you get a mostly enjoyable dog-eared formula for escapist entertainment without critical perception. I guess this is what they call a mixed review. 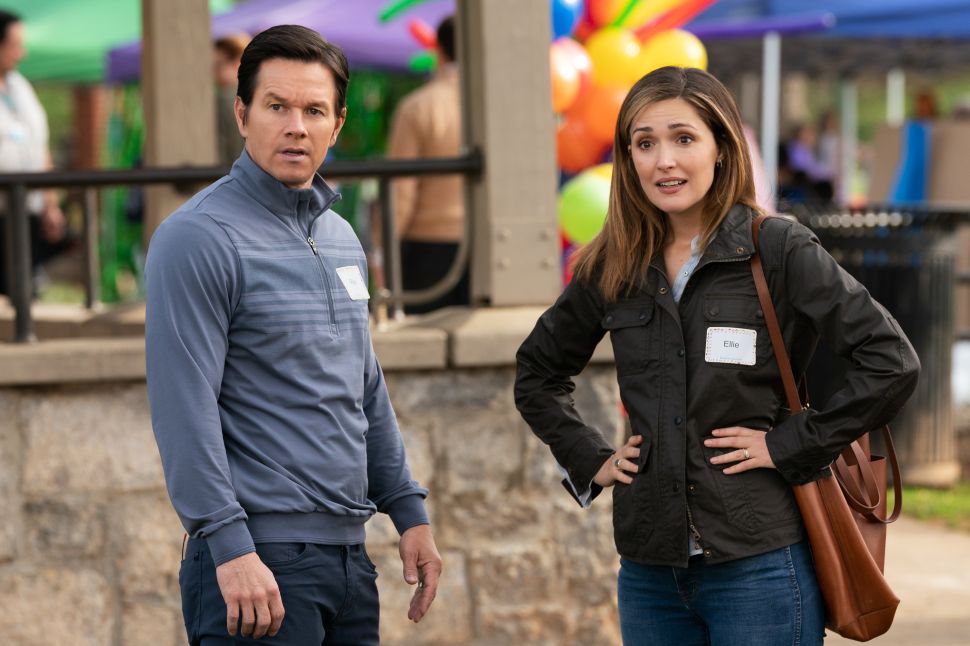