Things have been picking up on Broadway. I guess it’s about time for a dismal disaster. So if watching heart attacks in Times Square or chasing ambulances to three-alarm fires in Brooklyn is your special masochistic cup of arsenic cocktail, you couldn’t do much better than the $35-million musical version of King Kong that stomped and crashed its way from Australia, where it was glued and hammered together, to the New York theater season at the Broadway Theatre, where it collapsed in a heap of rubber, scrap metal, broken puppet strings and bad reviews. Strip away the ropes, cables, wires and pulleys, and what you’ve got is a brain-damaged story about a boy, a girl, and a monkey. The monkey is the only thing you’ll remember.

From the movie, you already know the boy is Carl Denham, a greedy, guileless, second-rate director scraping up the money to finance a boat trip to Skull Island to make a movie without a plot. The girl is Ann Darrow, a bankrupt Depression Era farm girl with no experience and no discernible talent who will do anything to be a star, including singing indescribably bad songs with titles like “Scream For the Money.”

The trip to Skull Island is so long and boring that you wonder if the monkey will ever show up at all. But once he does, you never want him to leave. Why would you? Kong, as he is affectionately called by everyone on the payroll, is rumored to be 20 feet tall (I didn’t bring my tape measure), weighs a ton and roars like three back-to-back Japanese volcanoes. One encounter with the beast and Denham exchanges the movie business for monkey business. Capturing, tying up and transporting the big ape back to New York to turn him into a profitable theater attraction all happens offstage, while the grownups in the audience head for the concession stand to buy King Kong cocktails.

The action lulls every time Kong is dragged away by 10 to 15 puppeteers at a time, darting around beneath him trying not to get crushed while pulling his strings, moving his limbs, and changing his expressions to encompass pain, joy, and pathos (yes, this is a Kong that cries like a baby chimp, shedding tears like waterfalls). Dressed in black (including hoods) the animatronics engineers are pretty nimble while they manipulate the big ape to make him look real.

Too bad they can’t do the same for the actors. Denham is a thankless role, devoid of any compassion for animal life, but Eric William Morris does the best he can without a humanizing love-story subplot. Ann has become a feminist to suit the times we live in (never mind the fact that her freedom campaign is ridiculously out of place in the 1931 setting) who is not only unafraid of Kong but suspiciously enraptured by his gentle sweetness in all the wrong ways. In the truncated role, Christiani Pitts does not impress. Her acting is wooden and her singing is so largely incoherent that her voice sounds like it is coming from the inside of a cheese grater. Bring back Fay Wray.

Lamely directed by Drew McOnie with choreography that cripples the musical numbers like traffic jams, this show is so bad that while the plot just stumbles along, you can’t wait for the big gorilla to come back. Every time the people start talking, everything falls apart. The bombastic musical interludes by Marius de Vries that telegraph the action at all the wrong times and the atrocious strung-together pop songs that all sound alike (by Eddie Perfect, who is anything but) rhyme “women” with “simian” and “sitting pretty” with “New York City.” Intentionally or not, the lyrics more than match the campy, ludicrous book by Jack Thorne that forces Ann, in the treetops with her beloved Kong to say: “You’ve always known how to treat a girl—but this is pulling out all the stops!”

Don’t worry about scaring the kids. This Kong doesn’t eat anybody (the jungle natives on Skull Island have all been deleted from the plot anyway) and at the critics performance I attended, I sat in a row with five children and not one of them screamed. It all leads up to Kong’s fatal climb to the top of the city. Cue the planes circling the Empire State Building in the play’s best staged scene.

In the end, King Kong the musical ponders that famous sociological puzzle, paraphrasing the oft-quoted question about the bird and the fish to “A girl may love a monkey, but where will they live?” It’s not worth the bloated price of two tickets to find out. 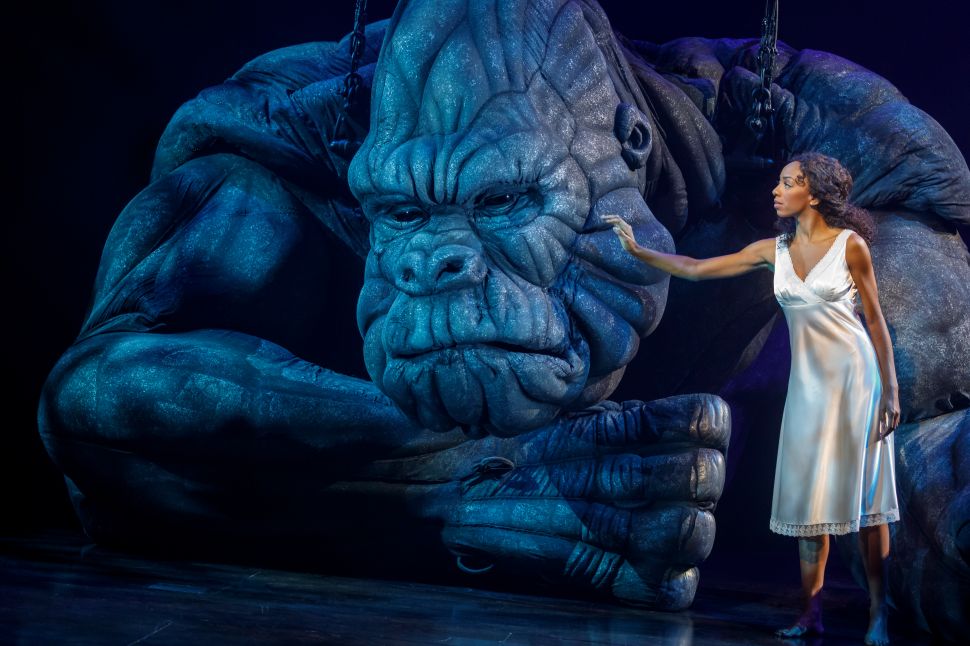