For most opera singers, even the A-list stars, the bulk of their schedule consists of what are known as “repertory” performances; that is, appearing in revivals of a company’s pre-existing productions.

This is in contrast to the more intensively rehearsed and personalized new productions like the Met’s recent Samson et Dalila and Marnie, in which stage movement, motivations and even hair styling are closely tailored to a particular artist’s tastes and strengths.

So repertory poses a particular challenge to a star singer: not only to fit, literally and figuratively, into the costumes and concepts devised for other artists, but to transcend those surroundings in a tasteful and organic way. Admirable examples of this were the raison d’être of this fall’s electrifying revival of Aida, featuring the dueling divas Anna Netrebko and Anita Rachvelishvili.

The return to the repertory of another warhorse, Bizet’s Carmen, also showcases a strikingly effective performance by a leading lady, Clémentine Margaine in the title role. If anything, her success is all the more impressive than those of the Aida stars’, since Margaine’s vocal abilities are relatively modest.

Her medium-sized mezzo is uneven, sometimes richly resonant; then, a note or two later, white and forced. On the night I heard her (October 30), the vital high notes around F and F-sharp stubbornly veered out of tune.

And yet this was an honorable and satisfying portrayal, sung with simplicity and elegant proportion, and played that way too. This Carmen was fascinating because she began and ended as a mystery. Volumes of thought and emotion transpired behind those drooping eyes and that crooked little smile, but at all times, even the moment of her death, she remained unknowable and (therefore) unpossessable.

Whatever Margaine’s current vocal estate (and I hope the roughness I heard represents only an off night in the mezzo’s Met career), she seems always to be a serious artist.

I wish I could say the same about soprano Sondra Radvanovsky, who’s taking on Puccini’s Tosca this fall. Her showboating performance on October 29, while certainly not lacking in spectacular moments, came as a sad disappointment after her “gripping and insightful” Norma last season.

Radvanovsky has everything going for her: intelligent musicianship, glamorous stage presence and especially that wonder-of-nature voice. She can sing literally everything: high, low, fast, slow, fortissimo, pianissimo. At the moment Tosca’s lover was dragged off to execution, the soprano hurled out a high C that rattled your ears and churned your gut; a bigger high C than Ghena Dimitrova’s or Gwyneth Jones’.

But that C exemplified what was wrong with Radvanovsky’s approach. It’s written to be held a bit longer than one beat at a slow largo tempo, though some singers stretch it out for two or even close to three. This soprano held it for six beats even as the harmony under it changed: an astonishing stunt but a stunt nonetheless.

The effect was so tasteless as to approach the level of a Carol Burnett parody: at the moment her lover is brutalized, the narcissistic diva turns to the news cameras and shouts, “Hey, everybody, look at me!”

Even the celebrated aria “Vissi d’arte” rang false, despite Radvanovsky’s sumptuous breath control. “I lived for art; I lived for love,” Tosca prays. But this Tosca seemed to care nothing for art or love or God Himself; she was all about triggering those cries of “brava!”

This, unfortunately, was the tone of Radvanovsky’s whole performance, a jumble of lurid vocal and visual effects begging for an editor. And in repertory at the Met, that’s a job the artist herself has to be willing and able to do. 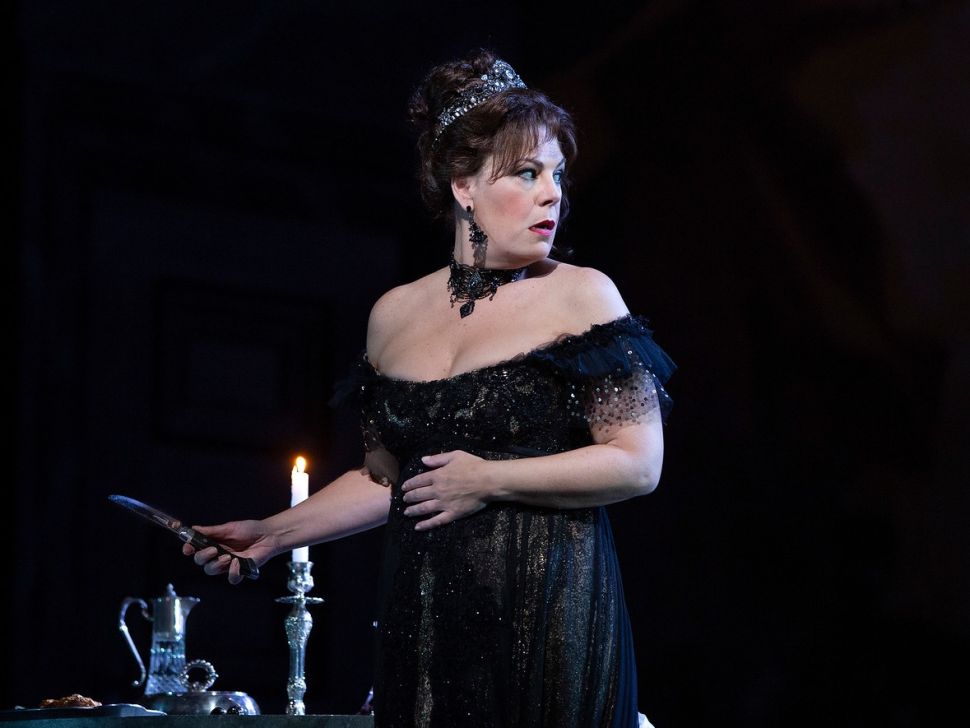