When Joel Hodgson decided to bring back Mystery Science Theater 3000, the 1988 show he created and starred in, with a Kickstarter campaign, its resounding success from die-hard fans essentially ensured he’d get more than one season. Now, Netflix has delivered, announcing a second helping of Mystery Science Theater: The Return, (its 12th season overall). Premiering November 22, the series arrives just in time for you to be torn between helping Mom candy the Thanksgiving yams and hermiting away in front of the TV.

The new season, which bears the title “The Gauntlet,” features six films—Mac and Me, Atlantic Rim, Lords of the Deep, The Day Time Ended, Killer Fish and Ator the Fighting Eagle—which Jonah Heston (played by Jonah Ray, returning for his second time around starring as the show’s test subject) must watch with his robot sidekicks aboard the spaceship holding him captive. But this time, the pawns in this mad science project get no respite—they must make it through all of the movies back to back.

While you should not attempt this at home, as returning cast member Patton Oswalt tweeted just after the trailer was released, Hodgson, who now serves as executive producer and co-director, assures, “It’s our best stuff.” He and Ray spoke to Observer about putting the new season together, how they find their best material and the one movie their fans didn’t want them to tackle.

Observer: The kind of movie riffing you started with Mystery Science Theater 3000 in the 1980s has been compared to what happens now on social media. But there is something different about watching a movie that you actually feel you can speak over, rather than just silently tapping away at your phone. What movies are good for laughing and talking over?
Ray: The way I approach it, as a lot of us writers do, is that we’re talking with the movie. And a movie that’s good to do that with is a movie that tried its best. It wasn’t trying to be bad, but all these different elements came together in an inappropriate way that made it a not great movie. And also the rhythm. They need a pacing that we can really cut into and dance with for a little bit.

Hodgson: That’s exactly it. Riffing works with any movie. It’s just that in the way we do it, we have to be in a situation where we present the movie, so we have to be invited. We’re like vampires. We have to say, “Will you please let us movie riff this? Then we do our thing with it.

Where do you find them?
Hodgson: Because we’re presenting them, there’s a certain amount of criteria. Can we afford the rights? Is there a good print? Is the sound good? Then after you clear those hurdles, you’re really looking for a movie that, I think, is adorable. That’s how I would explain it—movies that you’ve never seen that are kind of worth seeing and sharing with people.

Beyond that, I don’t want to tell you a recipe for where we find them, because someone will just go, “I’m gonna do that!” But there are things like the Psychotronic Video Guide. I mean, is that even a good reference, Jonah? That’s so old.

Ray: That’s a good resource up until a certain year. There are so many things out there now looking for these types of movies. Everything Is Terrible is made up of a good group of people who find films that people don’t know about.

Have you ever made it to the writers’ room with a movie that you had to give up on?
Ray: I wish we could give up on some of them.

Hodgson: It’s like parkour, you know? Here is this movie, and the challenge is to find a way through it. The second-act slump…man, they always pour in a really dumb chase scene or a really dumb fight scene. It’s not motivated. You have to go, “How do we make people care about this?”

Ray: There is a cycle of emotions that happens while you’re writing riffs for movies. You start the new movie and you’re like, “This is gonna be fun!” And then 20 minutes in you start to go, “This was a little harder than I thought it would be, but it’s going to be OK.” Then 45 minutes in I’m emailing Joel, going, “We made a mistake. We shouldn’t have tried this.”

How many times do you watch each movie before taping it? Do you rehearse?
Ray: When the movies are sent out to do the first pass, you kind of go through the whole thing once. You try to divvy it up for yourself. You have a few days to write on your own, then you’re in the writers’ room, and everyone is pitching their jokes. You start going over about 12 minutes [of the movie] a day, working for about five hours, watching them again and again.

From there, I’ll sit with our head writer in L.A., or Joel will be out in Pennsylvania doing the same thing, just taking all the jokes that we’ve amassed, tons and tons of jokes, and just slotting them in with the time codes making sure they fit. Sometimes we’ll have a perfect joke for a part that just doesn’t fit. So we rewatch it.

Hodgson: We probably have to watch the show about 12 times total. But that’s why we’ve got to have really good prints, really good sound—because we spend so much time with these things.

Ray: And when we shoot it, there’s a little bit of tweaking as we record, but we really try to keep it live and energetic, and not overdo it.

Was there ever a movie that caused controversy because fans felt like it was something you shouldn’t have touched?
Hodgson: Yeah, actually the movie we’re doing for one of our [live] shows, Deathstalker 2. We when we were starting, we didn’t know Deathstalker 2 was available. We thought only Deathstalker 1 was. So I gave it a cursory look. It was a Cinemax movie, so it had some hard R elements to it, but it also was very whimsical with puppets and creatures—all that stuff that we wanted. And we knew we could edit out the adult elements that would disrupt the show. We’ve done that throughout the history of the series.

But then we announced the movie and people got really upset. For whatever reason, they didn’t trust us. Like they thought we were going to let nudity be on screen. It was frustrating for me. Like, Wait a minute, I’ve done this for 30 years. You don’t trust me? They were getting to the point of like, “Defend yourself! What is your intent, sir!?” I was really blindsided by it. Then we went back and we realized that Deathstalker 2 was available, and it’s a way better movie. It was a similar thing, where they had obviously made it for Cinemax or some early dirty cable channel, but for some reason people weren’t as alarmed by that. It’s a softer movie, but it still has adult elements we had to take out. So anyway, that was the one that really shocked me, because we’ve edited so many movies to get them so that they would work as a TV-14 show.

Ray: And on the other side, there have been times where people felt a movie was too sacred. I remember hearing that a lot when they did This Island Earth [in 1996]. Because that’s, like, a well-regarded movie. It was huge in its time [in 1955]. I was on a podcast recently with the director Joe Dante where he was like, “Why would you even dare to do anything to This Island Earth?  It’s a classic.” And I was just like, Well, one: I wasn’t there back then. I just got this job…

But two: I never knew about This Island Earth until the Mystery Science Theater movie came out, and then it made me go, “That seems like an interesting movie.” Then I went and found the movie and got into it. I think people kind of get a little sensitive about it—“You can’t riff that. It’s a classic.” Well, it’s like, yeah, but now more people know about it. Celebrate it.

Do you feel any pressure to deliver given that the show was crowdfunded and that it currently has a 100 percent fresh rating on Rotten Tomatoes?
Hodgson: I don’t feel as much pressure to maintain the 100 percent. I just think that’s so unlikely, that we would get 100 percent again. But I love billboarding it, because it’s so unreal.

Ray: You should be proud, but it’s one of those things. I feel like I’m so averse to any kind of gloating or self-celebration that I’m kind of like an honorary Midwesterner.

Hodgson: To answer your question, on one hand I wanted to make the viewers happy—or the backers. But at the same time they weren’t seeing what I was seeing for the future. They weren’t really getting it. So I felt like I had to get them acclimated to the idea that this is the new version; it wasn’t going to be a love letter to the old version. Once they got out of that, it was OK. But I had to really prep that. Cause they were going, “How are you going to get this new guy to be Joel or Mike? Or have you forgotten?” And you’re like, “Just drop that. That’s done. Everybody did a great job, but now somebody new has got to do it.”

I watched a 1997 Sci-Fi channel documentary on the show where you talk about some of the most unusual fan mail you received. What were the best or even strangest responses you got after it came back on Netflix?
Ray: Well, for me, the most common reaction was, “You didn’t blow it.” I think people were very hesitant about me coming in. The most common thing was just real consistent, “Hey, man, I thought you were going to be absolutely terrible. And you weren’t. Good job.”

Hodgson: Well firstly, I don’t ever want to encourage the fans to do weird or outrageous things; I don’t want to reward that. So I’m not going to go, “Wow, some really sick shit happened once, and that really gets my attention.”

But for me, the best thing was that people were really happy with Jonah. There is just this unfair pattern that got established because the show got canceled and didn’t get to move on to a third person. It was two for so long, and people just got caught on that. I think now that there’s three of us, everybody can start to understand, “Oh, yeah, it can just keep going.” 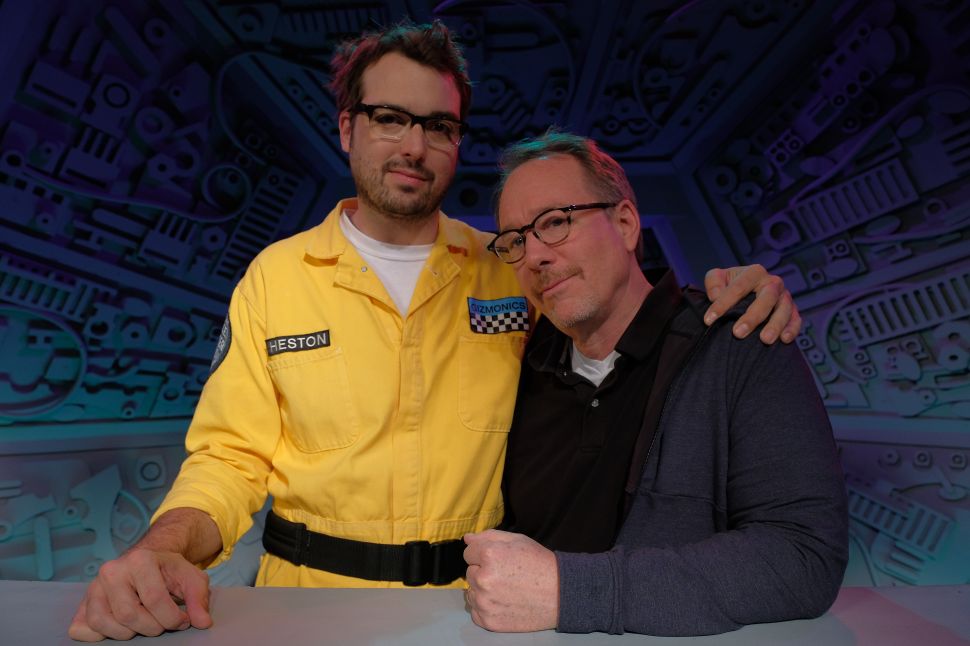