This afternoon, NASA will attempt to stick its eighth landing on the Martian surface. But first, its latest spacecraft—a robotic lander that took nearly 10 years and $1 billion to build—must survive a hellish trip through the Martian atmosphere. Once on the surface, the intrepid explorer (dubbed InSight) will sit on the red planet’s surface and listen for Mars quakes over a period of two years.

In order to carry out its mission, InSight (which is short for Interior Exploration using Seismic Investigations, Geodesy and Heat Transport) must be able to slow itself down enough to gently touch down on the planet’s surface. Right now, the spacecraft is racing towards Mars at speeds of nearly 13,000 miles per hour—more than 200 miles a minute! It will have just seven minutes to slow itself enough to land smoothly on the planet’s surface. But it’s not enough to just land on the surface, the probe must do so and still be in working order to carry out its critical science mission. (To date, NASA is the only space agency that has accomplished this feat.).

Once the lander hits the top of Mars’ atmosphere, it will perform a complicated series of maneuvers to slow itself—pulling about 12Gs during deceleration—a process known as entry, descent and landing. It will take seven minutes before NASA will know whether or not InSight survived this harrowing ordeal.  During this process, which is appropriately dubbed “seven minutes of terror,” InSight will free-fall through the Martian atmosphere, relying on its heat shield to protect it from temperatures hot enough to melt steel. Then, it will deploy a supersonic parachute which will slow it down even more before a set of onboard thrusters ignite, allowing it to land gently on Mars’ ruddy surface.

This mission is incredibly exciting for a number of reasons. Today marks the first time since launching the Curiosity rover in 2011 (exactly seven years ago today) that NASA is sending a spacecraft to the surface of Mars. But unlike Curiosity, InSight is going to land on Mars and stay in one spot. Rover missions, like Curiosity, are full of flash and pizazz; after all, who doesn’t love anthropomorphized robots sending back panoramas of other worlds?

InSight is a different beast. From its stationary perch on the plains of Elysium Planitia, it will be the first mission to peer deep below the Martian surface—six feet to be exact. This is the deepest we’ve ever explored Mars, and thanks to this stationary geophysical investigation, scientists will be able to better understand the formation, evolution and composition of the red planet and by extension, other rocky bodies in our solar system (including the Earth).

InSight is a burrowing spacecraft that relies on solar-power to function, and its parking spot on Elysium Planitia will provide it with maximum sun exposure, as well as smooth, penetrable terrain. Once InSight has unfolded its twin solar arrays, NASA’s newest interplanetary emissary will get to work. First on the agenda is to unpack its instruments. To do so, the robot will use a five-fingered grapple attached to the end of its robotic arm. It will then proceed to try its luck at the first ever interplanetary claw game.

Have you ever played the claw machine at an arcade? If so, you know it can be difficult to grab that coveted prize. Now, imagine doing that remotely, controlling a robotic claw on another planet and this time trying to grab instruments far more delicate and fragile than anything found in Earth-bound claw machines. Sounds intense, right? This is the first attempt at using a robotic arm to grab and move instruments off-world. If all goes according to plan, these instruments will give scientists around the world their first glimpse into the heart of Mars.

Watch with us, as NASA live streams coverage of the landing starting at 2 p.m ET. Assuming that all goes well, mission control could know shortly before 3 p.m. whether or not InSight survived and landed safely on Mars. 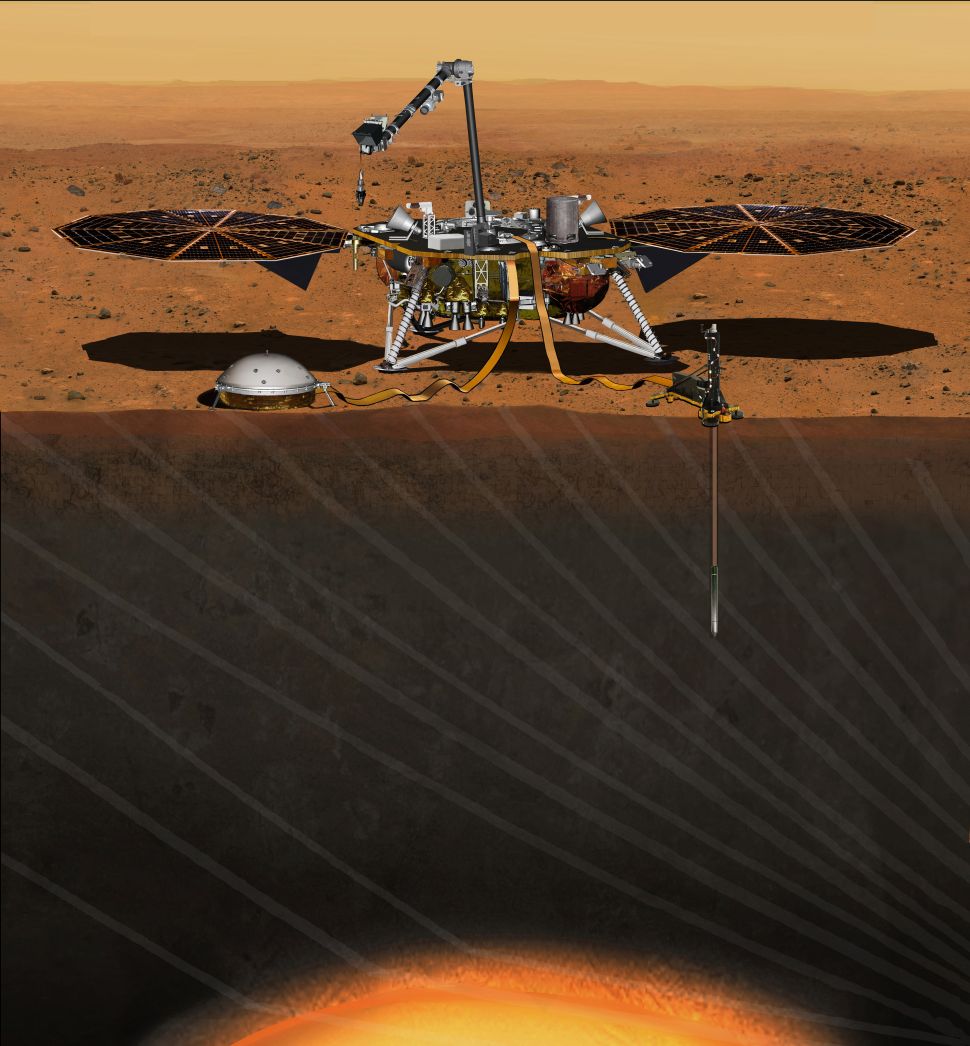