Doctor Who made headlines this July when the show released an announcement that, for the first time in its fifty-year history, the Doctor would be played by a woman when it returned in October—Jodie Whittaker had been cast as the 13th iteration of this beloved character. The news was met with joy, confusion and backlash. Audiences wondered how a woman would approach a role so iconic it rivals only James Bond—as even Billie Piper, who co-starred in the series in its first and second resurrected seasons, beginning in 2005, pointed out.

To get a sense of the show’s audience, and why this move was so controversial, it helps to understand that the British science fiction TV program produced by the BBC was, like Star Wars, at first aimed at younger audiences. But not only is it a story that can be enjoyed across age ranges and demographics, those first fans are now full-grown, living out their youthful obsession by watching it with their own kids.

Focusing on the adventures of the Doctor, a brilliant, time-traveling, tech-savvy alien who traverses planets and millennia in his spaceship, the TARDIS, the role is able to be replaced by different actors due to a key part of the alien’s shape-shifting makeup.

The fact that it’s taken fifty years and thirteen Doctors to get one woman in the lead role isn’t consistent with the show’s own lore about its titular hero, but here we are.

Gender has always been a thorny issue in Doctor Who. The show’s supporting characters are historically beautiful women who fall in love with the Doctor. They’re often isolated and underemployed; they typically latch onto the Doctor and the time-traveling adventures he offers as an enthralling escape from the dreary monotony of their ordinary lives. One of the abiding poignancies of the series is that for the Doctor’s companions, the risks of time travel—death, memory loss, getting trapped in an alternate reality, or in the distant past—are almost always worth it. They risk everything because they’ve never had much to lose.

The entire set-up of a vulnerable woman relying on an older, more experienced man is problematic from the outset. In a typical season, an impressionable female character is paired with the centuries-old, ultra-confident, eccentric alien male, who takes her on trips throughout space and time. The resulting discussion surrounding the show’s conceit has often skewed explicitly gendered. It has been claimed that the Doctor is meant to be a role model for young boys, that his companion is meant to be the character who is relatable to female viewers, and also that the beautiful female companion is there “for the dads.” In any case, the sidekick’s primary task is to be resourceful and likeable, and to ask the Doctor questions. The audience discovers the Doctor, and the world of interplanetary time travel, through his companions. In this way, the show has historically normalized and propagated older male authority and female submission.

Whittaker’s Series 11 turns these assumptions on their head. For one, the new companions completely break the typical mold. Yasmin, a woman of color, is a traffic ticketer whose boss continually passes her over for promotion, but she’s too young and scrappy to be defeated by his casual sexism. She’s attracted to the Doctor because she sees her as a role model. Courageous Ryan is an unemployed young man who lives with dyspraxia, a neurological disorder that impairs his motor ability. The company is rounded out by Ryan’s step-grandfather, Graham, who has lingering physical disabilities from a past battle with cancer. These companions span gender, ethnicity, age and varying disabilities, and for Doctor Who companions, they’re unusually sturdy and sure of themselves.

The fact that there are three companions from the get-go is actually incredibly significant. While the Doctor often has multiple companions who come and go, he usually has a primary one who sticks with him throughout the season—and she is almost always single, young and white.

While the companions are vital to the show’s structure and emotional core, it’s the Doctor who sets the tone for the show. This is where Whittaker’s portrayal becomes something more than just different, but culturally important. Whittaker plays an alien who, after hundreds if not thousands of years as a man (the Doctor’s age is a source of debate even among showrunners), discovers that she has suddenly become a woman.

“Why are you calling me Madam?” she asks, in one of her first lines in the season premiere, “The Woman Who Fell to Earth.”

Yasmin frowns, baffled and annoyed. “Because you’re a woman.

“Am I?” the Doctor asks, delighted.

She then proceeds to save the company, and thereby the world, with all the zany gusto the audience expects from the Doctor. And yet, there is something shocking and altogether new about seeing a woman successfully throwing her weight around on this show, taking charge of a group, having complete faith they will follow her, and all the while being portrayed as genius, bumbling and lovable. When the tenth Doctor seized control of a spaceship hurtling towards an exploding sun in “The Impossible Planet,” he may have briefly wondered if the other astronauts might resist his leadership, but neither he nor the audience ever considered that the other astronauts would dismiss him on account of his sex. The thirteenth Doctor doesn’t appear to weigh that possibility, either, and it’s completely refreshing.

By merit of the fact that she has never been female before, the thirteenth Doctor is an adult woman who has never feared rape. Astoundingly, this means that Whittaker’s Doctor is like every past Doctor in history: she has never thought twice about walking down the street at night. She’s a woman with all the bravado and confidence of male privilege.

In a post-Kavanaugh America, there is something more magical about seeing race, gender, age and disability diversity in a group of heroes headed by a woman than the show’s fantastical time-traveling spaceship or sonic screwdriver. This is possibly one of the season’s major takeaways, as the premiere opens with the TARDIS’ and sonic screwdriver’s absence, our heroes solve their problems through wit, bravery and sheer force of character alone.

It will be interested to see if this Doctor will experience institutionalized sexism and misogyny as Yasmin does, or if the series will make the case that this Doctor’s unshakable confidence and charisma make her immune to its effects. It’ll also be worth monitoring if the Doctor might have some self-reflection on the often-troubling way she’s treated her companions in the past. 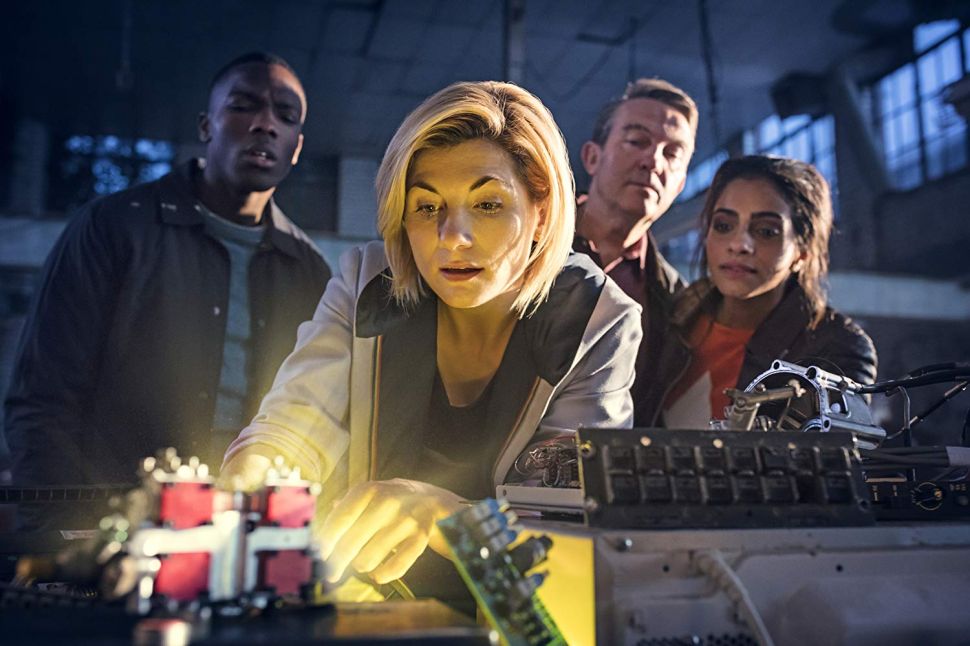