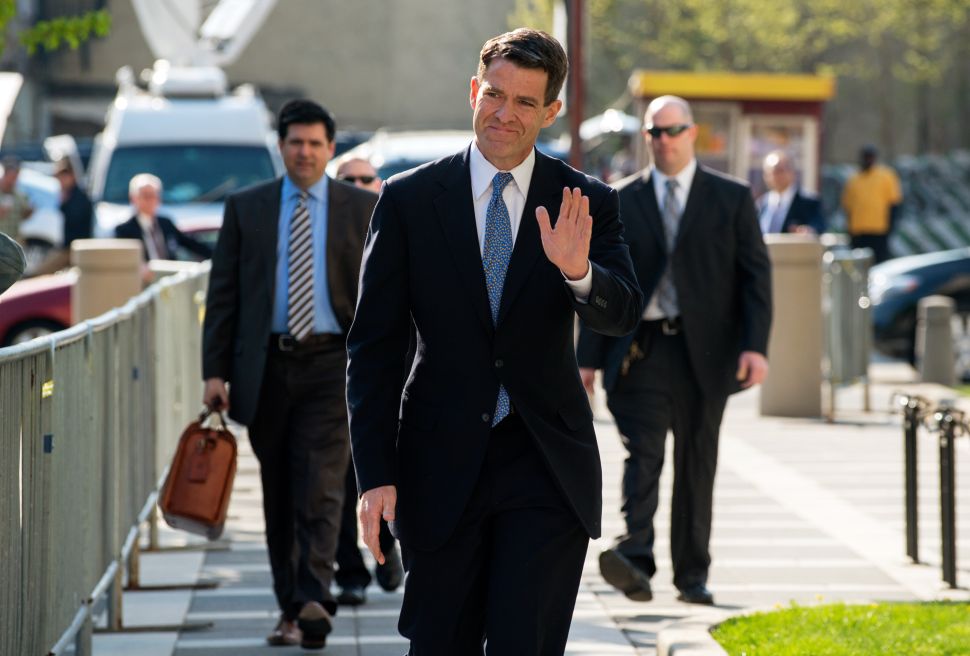 Bill Baroni, the Deputy Executive Director of the Port Authority, who was convicted for his part in the Bridgegate scandal. Bryan Thomas/Getty Images

A pair of aides to former Gov. Chris Christie convicted of deliberately blocking traffic on the George Washington Bridge in a case of petty political payback say they’ll take their appeal to the U.S. Supreme Court after an appeals court let stand two of three convictions against them.

Kelly, 45, is Christie’s former deputy chief of staff, while Baroni, 46, is the former deputy executive director of the Port Authority. He is also a former state senator and assemblyman.

Kelly is best known as the author of the infamous “time for some traffic problems in Fort Lee” that allegedly led to the closing of lanes on the nation’s most-traveled bridge in an attempt to punish a Democratic mayor who would not endorse Republican Christie’s re-election efforts.

Just how much time Baroni and Kelly will serve for their convictions remains in question. The office of U.S. Attorney Craig Carpenito told the Record that it is now examining the appellate court decision.
But Carpenito had previously represented Christie against allegations of official misconduct in connection with the Bridgegate case, the Record notes.

Quote of the Day: “Voters should be choosing their politicians — not the other way around,” — Helen Kioukis, of the League of Women Voters of New Jersey, on a plan by state Democrats that critics say would lead to more gerrymandering in the state.

Bridgegate: Ex-Christie Aides Win Appeal on One Conviction, Still Guilty on Two Other Counts
A pair of aides to former Gov. Chris Christie have been successful in their bid to overturn a federal civil rights conviction for their role in the lane closing scandal at the George Washington Bridge, better known as “Bridgegate.”
The Record Read more

Lawmakers Earmark $160M in Pollution Settlements to Restore Habitat, Clean Water
The state is moving to spend tens of millions of dollars on restoration of natural resources after voters approved a constitutional amendment to prevent money from pollution settlements from being diverted to plug budget deficits.
NJSpotlight Read more

Phil Murphy Promised a $15 Minimum Wage. Here’s Why It Hasn’t Happened.
In 2016, after Democrats who controlled the state Legislature passed a bill gradually raising the minimum wage across the state to $15 per hour, former governor Chris Christie planted himself in the produce section of a Pennington grocery store to sign a veto, effectively stopping the movement in its tracks.
NJ.com Read more

Murphy Fires Back at Top NJ Lawmaker: Don’t Call Me a Showboater on $15 Minimum Wage
Gov. Phil Murphy responded to New Jersey’s top state lawmaker for suggesting the governor was “showboating” by holding a news conference Monday on a long-delayed effort to raise the state’s minimum wage to $15 an hour.
NJ.com Read more

Bayonne Councilman to End Jobs With Freeholder, Assemblyman to Focus on New Role
Neil Carroll III, the Peninsula City’s newest councilman, said he will be stepping down from his positions with a county freeholder and local assemblyman to focus on his job with the city.
NJ.com Read more

School Fires Special Education Teacher Over Racist, N-Word-Laden Rant
A tenured special education math teacher is out of a job after a profanity-laced tirade in his classroom that included repeated use of a racial slur.
NJ101.5 Read more