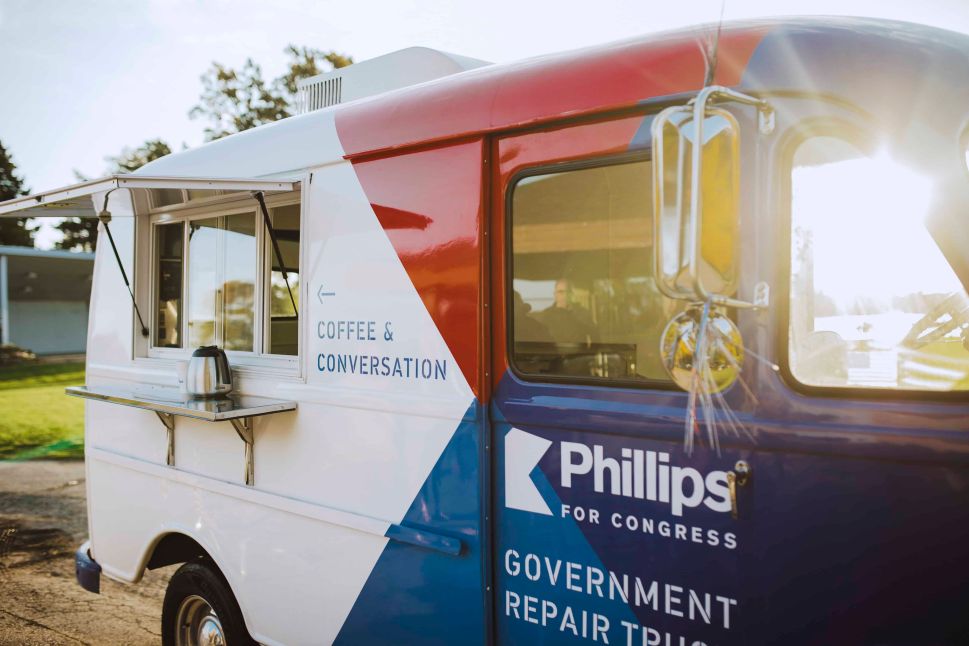 The image of a candidate, setting out on road or rail, engaging in hand-to-hand retail politics has been a tried and true successful campaign formula in American politics for well over a century. Perhaps the most notable example of the quintessential political road trip was that of the late Senator John McCain and his Straight Talk Express bus, which he used to criss-cross the country during his failed presidential runs in 2000 and 2008.

But this year, just in time for the highly anticipated 2018 midterms, the bus is back. Or in some cases, it’s an old refurbished 1960 International Harvester Milk Truck.

Across the country, old, rusty and oft-forgotten vehicles are finding new life as symbolic metaphors for political campaigns across the political spectrum. But the use of a vehicle as part of a campaign’s iconography has produced mixed results.

Georgia State Senator Michael Williams was trounced in the Georgia gubernatorial Republican primary, but not before he stirred up controversy by refurbishing an old Blue Bird school bus and christened it as his campaign’s “Deportation Bus.” Williams promised to “fill [his] bus with illegals and send them back to where they came from.” The image of a white, southern Republican trolling the back streets of Georgia hunting for illegal immigrants sent the mainstream media into a splenetic fit of shock and outrage, earning the candidate nationwide condemnation.

“The modern political advertisement is so slickly produced—with high-end graphics, perfect lighting and talking points which have, in many cases, been massaged by consultants and run by focus groups—that the imagery of an old beat-up bus that has been brought back to life to serve as the centerpiece of a retail campaign strategy affords the candidate a degree of authenticity that he might otherwise struggle to convey,” said Bradley Honan, a political strategist who has worked for Bill and Hillary Clinton, Michael Bloomberg, Jon Corzine and scores of other political notables. “This trend we’re seeing of an old bus or truck being the preferred means of transportation for someone running for office was first successfully put to use by Minnesota Senator Paul Wellstone’s “Magic Green School Bus” and the actor-turned-senator from Tennessee, Fred Thompson and his famous “Red Pickup.” Both used their everyman vehicles as iconic and highly visible campaign symbols that just happened to take them from town to town to deliver their stump speeches.”

Jeremy Peruski is running for Congress this year as an independent challenger to first-term GOP Congressman Paul Mitchell in Michigan’s 10th district, a sizable area otherwise known as the “thumb of Michigan.” After Peruski’s internal polling indicated that he might be within striking distance of Mitchell, who, prior to winning in 2016, had lost his bid in Michigan’s neighboring 4th congressional district, Peruski decided that his campaign needed a visual that could quickly sum up his candidacy.

“My opponent, Paul Mitchell, is a carpetbagger plain and simple. In 2014, he ran in his home district—where people ostensibly knew him the best—yet he still lost in a landslide. So, two years later, when my home district became an open seat, he decided to run, even though he didn’t even bother to move into the district. He flooded the airwaves with almost $4 million of his own cash to buy it,” said Peruski, who grew up on a dairy farm in the district before pursuing a finance career that has led him around the world until he decided to return home and run for office. “To contrast my campaign with that of Mitchell, I wanted to show voters my deep roots here in the area, and for me, there was no better way of making that emotional connection than by resurrecting my grandfather’s old 1956 GMC Bus. It’s a symbol of the beaten up and bruised dysfunction we have in our politics today. With the right repairs, maintenance and passion, both can be repaired and restored to their former greatness.”

The Peruski campaign bus is the same model as the one in which Rosa Parks took her famed stand against segregation in 1955—a point the candidate makes in a social media spot that appears to be ripped straight from the History Channel’s Counting Cars.

The candidate who has perhaps taken political vehicular iconography to an entirely new level is Democrat Dean Phillips, who is vying to unseat five-term GOP incumbent Representative Erik Paulsen in Minnesota’s 3rd congressional district. One of the nearly inescapable visuals of the Phillips campaign has been the candidate’s “Government Repair Truck”—an old 1960s era milk truck that has been repainted in red, white and blue with a dash of purple (a nod to both the bi-partisan nature of the Phillips campaign schtick, as well as to Minnesota’s unofficial official color). Even the year of Phillip’s truck, 1960, is not a coincidence; it’s a reference to the last time a Democrat represented Minnesota’s 3rd district in Congress.

“My 1960 International Harvester ‘Government Repair Truck’ is a reference to the dysfunction in Washington that needs to be fixed, which has led many people to say I need a bigger truck,” said Phillips, who is a seasoned consumer marketer with a better appreciation than most political neophytes for the power of brand-building. “Ever since I kicked off this effort over a year-and-a-half ago, the truck has served as a conversation starter—and that’s exactly what I have been attempting to do on the campaign trail. I have been getting people of all political stripes—Democrats, independents, Republicans and everyone in between—talking to each other about how, together, we can solve the biggest challenges facing our communities.”

The Phillips campaign has come up with a variety of novel ways to use the truck in its political marketing. Taking a cue from James Corden’s popular “Carpool Karaoke” bit, Phillips regularly uses the “Dean Machine,” as it has come to be known, as a backdrop to host “drive and talk” interviews with notable celebrities, local politicians and everyday people from across his district.

Zach Rodvold, Phillips’s campaign manager, thinks that the “Dean Machine” has given the campaign an edge.

“People want representatives who care enough to listen, and show up, and the truck has become an iconic symbol of Dean’s accessibility—a stark contrast with our opponent, who went nearly seven years without hosting a single town hall meeting,” Rodvold said. “The way Dean has run this campaign is exactly how he would serve in Congress. So, rest assured, people will see a lot more of Dean—and the “Dean Machine”—if he’s elected.”

Political observers agree that if Phillips and his “Government Repair Truck” manage to vanquish his opponent on Tuesday (most polls are giving Phillips a slim lead over Paulsen), it will likely inspire a whole new cadre of candidates to come up their own campaigned-themed vehicles in 2020.

“Vehicles are really the perfect political visual metaphor for this day and age,” observed Honan. “Whether you are a Republican in line with Trump’s message of making ‘America Great Again’ or a Democrat who wants to turn back the page before Trump ruined everything—in both cases, a refurbished vehicle from the past serves as the perfect political metaphor for change.” 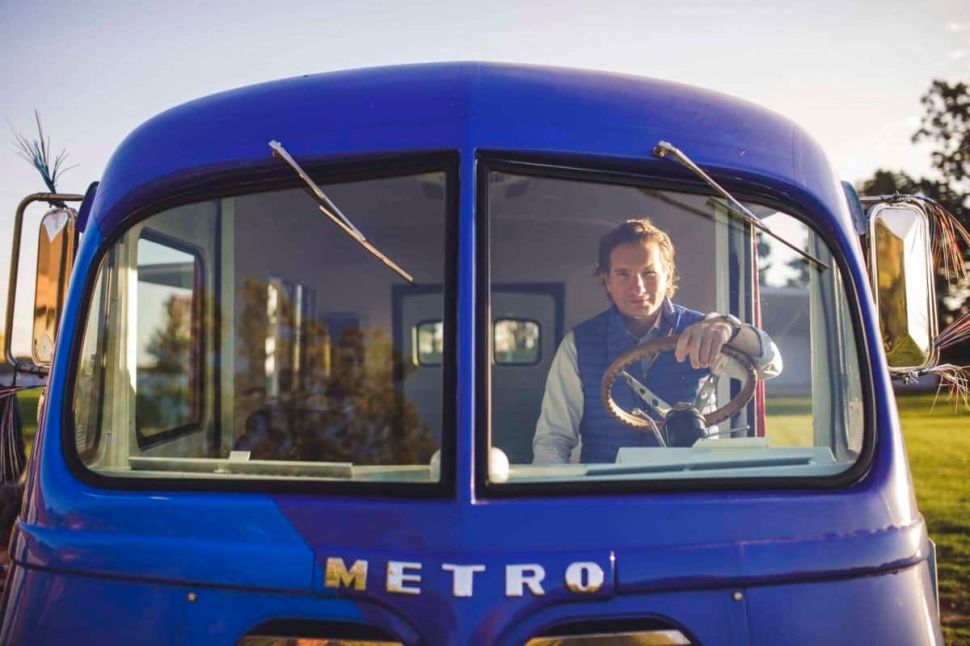